AHMEDABAD, India — A 1,640-foot brick wall has been hastily erected in India’s Gujarat state ahead of a visit by U.S. President Donald Trump, with critics saying it was built to block the view of a slum area inhabited by more than 2,000 people.

“Since they are spending so much money on this wall, why not use that to improve our slum and provide better facilities for us. Why are they hiding us poor people?” — Keshi Saraniya, a resident

“Since they are spending so much money on this wall, why not use that to improve our slum and provide better facilities for us,” said Keshi Saraniya, a resident. “Why are they hiding us poor people?”

Trump is visiting the city of Ahmedabad in Gujarat during a two-day trip to India next week to attend an event called “Namaste Trump,” which translates to “Greetings, Trump,” at a cricket stadium along the lines of a “Howdy Modi” rally attended by Indian Prime Minister Narendra Modi in Houston last September. Trump is to drive along a road next to the slum and will be accompanied by Modi, who is from Gujarat.

News reports said the wall was originally planned to be 6-7 feet high but was reduced to 4 feet after it received widespread publicity.

Senior government official Bijal Patel said the wall was built “for security reasons” and not to conceal the slum.

“Apart from security reasons, the wall is also part of a beautification and cleanliness drive,” she said.

Several political leaders were quick to criticize the wall’s construction, questioning Modi’s development work in his own state. Modi was chief minister of Gujarat for 12 years before becoming the country’s prime minister in May 2014. 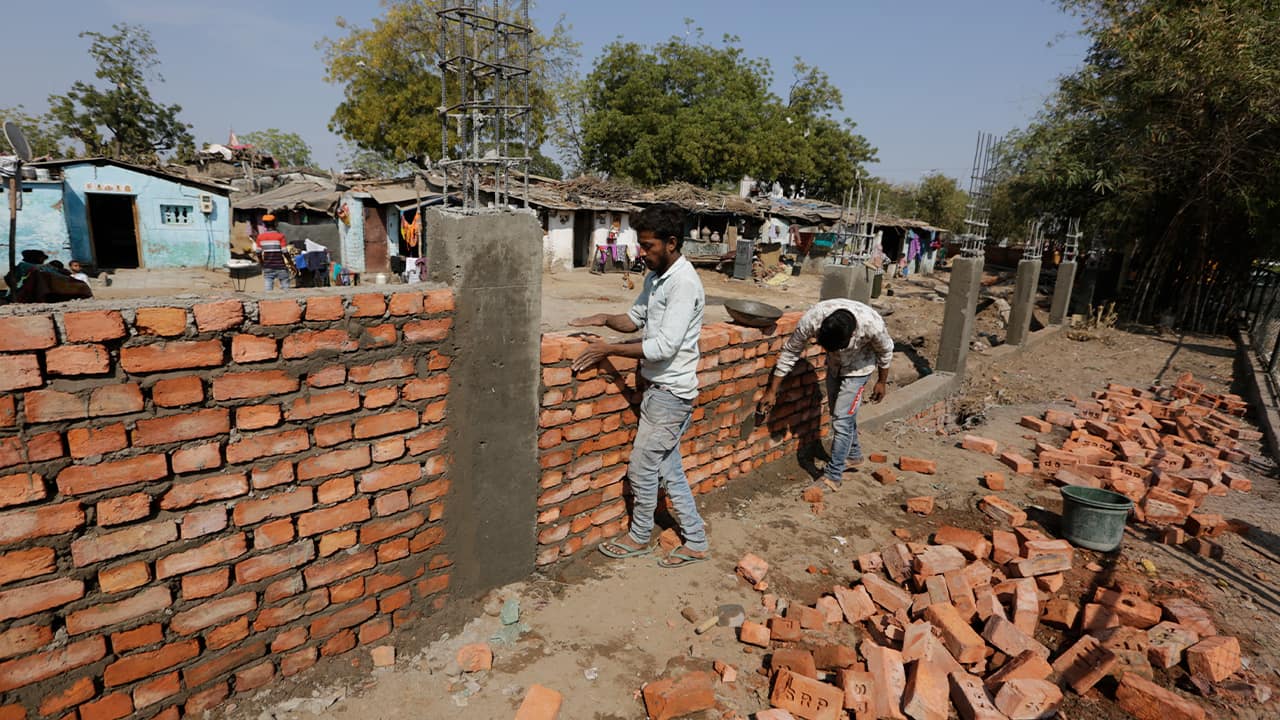 Indian workers construct a wall in front of a slum ahead of U.S. President Donald Trump’s visit, in Ahmadabad, India, Monday, Feb. 17, 2020. Trump is scheduled to visit the city during his Feb. 24-25 India trip. (AP Photo/Ajit Solanki)

Authorities on Monday also served eviction notices to 45 families living in another slum area near the cricket stadium.

The residents said they were asked to leave because of the upcoming event, but the city’s civic body denied it.

“We have been living here for the last 20 years and now we are suddenly being told to vacate because some important leader is visiting this city for a day,” said Sanjay Patani, a resident. “This is injustice.”

Kishore Varna, a government official, said the land belongs to the civic body and evictions were done under the law. He didn’t say why the eviction notices were sent just days ahead of Trump’s visit.

Trump, who has pledged to build a wall along America’s border with Mexico to stop people from entering the U.S., is visiting India on Feb. 24-25. His visit is aimed at smoothing ties strained by trade disputes and could also allow him to woo tens of thousands of Indian-American voters ahead of the U.S. presidential election.

Trade tensions between the two countries have escalated since the Trump administration levied tariffs on steel and aluminium from India.

India responded with higher tariffs on agricultural goods and restrictions on U.S. medical devices, prompting the U.S. to retaliate by removing India from a decades-old preferential trade program. ___ Associated Press writer Sheikh Saaliq in New Delhi contributed to this report.