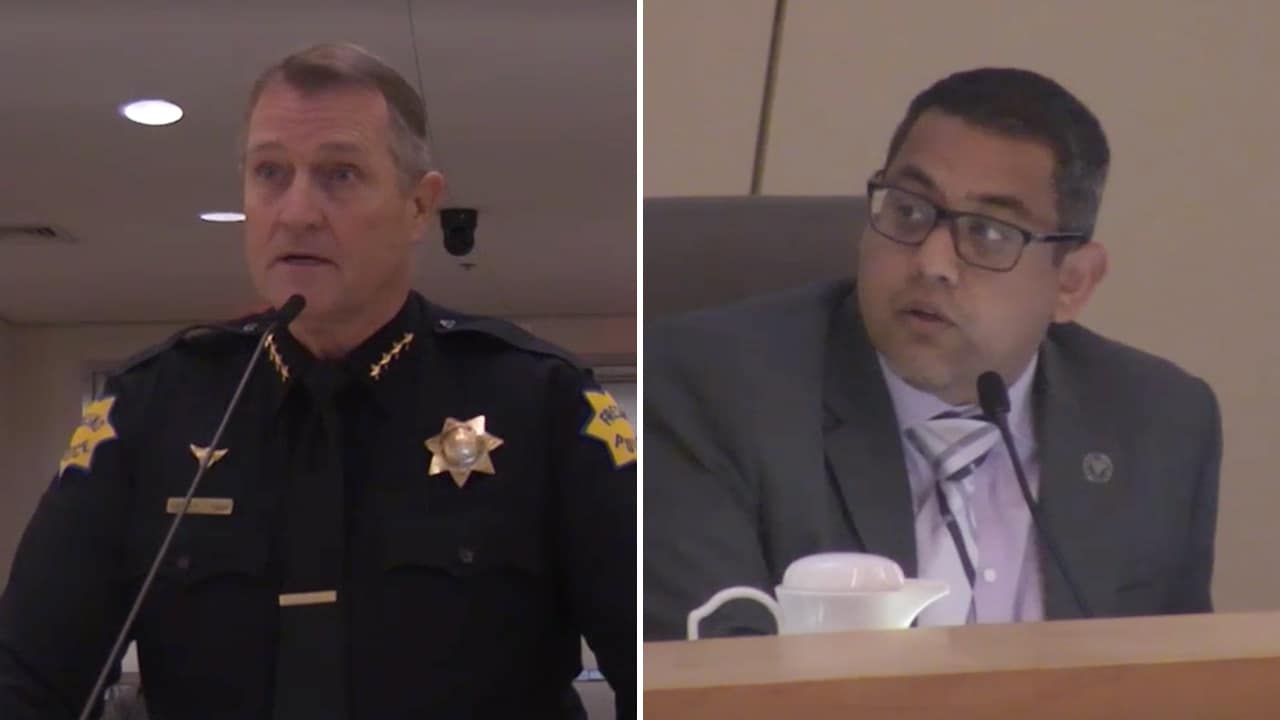 The Fresno Police Department needs 900 new guns. And, the city council and the mayor’s office tentatively have agreed to pay for them.
But, the path to “yes” included a testy exchange between council president Miguel Arias and police chief Andy Hall at Thursday’s meeting.

Hall told the council last month about the department’s gun situation. He said the current stock, which is many years old, was a safety hazard. And, he wanted to replace the old .40 caliber handguns with 9 mm models. The new sidearms, he said, would use cheaper ammunition.
He again addressed those concerns Thursday, saying “a gun that may fire today, may not fire tomorrow. … It would be like driving a car that may not have brakes tomorrow.”
And that led to an uneasy conversation.
Arias asked Hall why he didn’t budget for new firearms last year — the same year the department converted temporary employees into permanent staff.
Arias also quizzed Hall about raises for police employees and replacing vehicles.
“It’s fair to say that you need more resources, and so does everyone else,” Arias said.
Arias went on to say that the police department gets the lion’s share of the city’s budget every year.
Hall asked to respond, but Arias denied the request. Hall continued, anyway, noting how outdated the department’s buildings and equipment were.

Councilman Mike Karbassi proposed sharing the cost of funding new police weapons with the Mayor’s office. His motion was approved.

“We have to go to the community to beg for donations to purchase food to feed our dogs and horses,” Hall said. “The fact is, guns are not negotiable.”
Arias responded, “What’s also not negotiable, Chief, is that something as basic as service guns are not planned in your operational budget.”

Hall threatened that officers may get laid off to afford the new guns if the council wasn’t willing to foot the bill. He also expressed disappointment that a letter he wrote asking council support for the new guns was leaked to the media.
“That’s shameful,” Hall said.

Karbassi Comes up With a Solution

Ultimately, councilman Mike Karbassi made sure the department’s gun needs were at least partially met.
The council allocated $113,500 for the guns, with Mayor Lee Brand’s administration responsible for the rest of the $273,600 request.
Brand has since said that his staff is working to find the remaining funding.
Karbassi made it work on the council’s side with a proposal to shift $50,000 of $100,000 designated for City Hall interns and $63,500 designated for building a police memorial.
Karbassi said it was better to spend money to prevent the names of more officers going on the memorial.

With Britain Out, the Unwieldy EU Faces Major Budget Battle