BEIRUT — Over 140,000 Syrians have been displaced in the last three days alone by violence in the country’s northwest, bringing the total of those uprooted in a Syrian government offensive against the last opposition stronghold to over 800,000, the United Nations said Thursday.

The U.N. said at least 60% of the more than 800,000 displaced since Dec. 1 are children. The humanitarian crisis in the already overcrowded opposition-held enclave is compounded by freezing weather conditions, and existing severe needs.

The government offensive, backed by Russia, has intensified and expanded to include southern and eastern Idlib province as well as southern and western Aleppo, an area home to an estimated 4 million people. Most have already been displaced from other parts of Syria because of the ongoing conflict.

The humanitarian situation for people in northwest Syria is “at the most critical points,” the U.N. said, adding that the massive scale of human displacement over such a short period of time has increased needs exponentially.

David Swanson, U.N. regional spokesperson for the crisis in Syria, said more resources, including funding, are immediately needed to save lives and alleviate suffering, predicting the 800,000 figure will rise in the coming days as the government offensive continues.

‘The Crisis Is Deepening by the Minute’

“This level of displacement couldn’t come at a worse time as more and more people are squeezed into an increasingly smaller area of land with little more than the clothes on their back,” he said, describing people fleeing in the middle of the night to avoid detection in temperatures below zero.

“The crisis is deepening by the minute, but the international community remains indifferent.” — David Swanson, U.N. regional spokesperson for the crisis in Syria

“The crisis is deepening by the minute, but the international community remains indifferent,” Swanson added.

Government forces, with Russian support, have focused their offensive on areas along a strategic highway that runs through opposition territory and connects the country’s south to the north. The M5 highway, now secured by Syrian troops, had been out of government control since 2012 and accessing it was part of a now failed 2018 cease-fire agreement. Calls for a cease-fire have failed to stop the violence.

On Thursday, government troops continued to advance through the Aleppo countryside to secure their hold on the highway. Most of the villages and towns that sit alongside the highway are now empty, while hundreds of thousands are squeezing into displacement camps, open fields and tents to move away from the front lines.

The U.N. said 550,000 of the displaced are living in Idlib towns and villages already packed with displaced people. Another 250,000 have moved to northern Aleppo in areas administered by Turkey and allied Syrian groups. 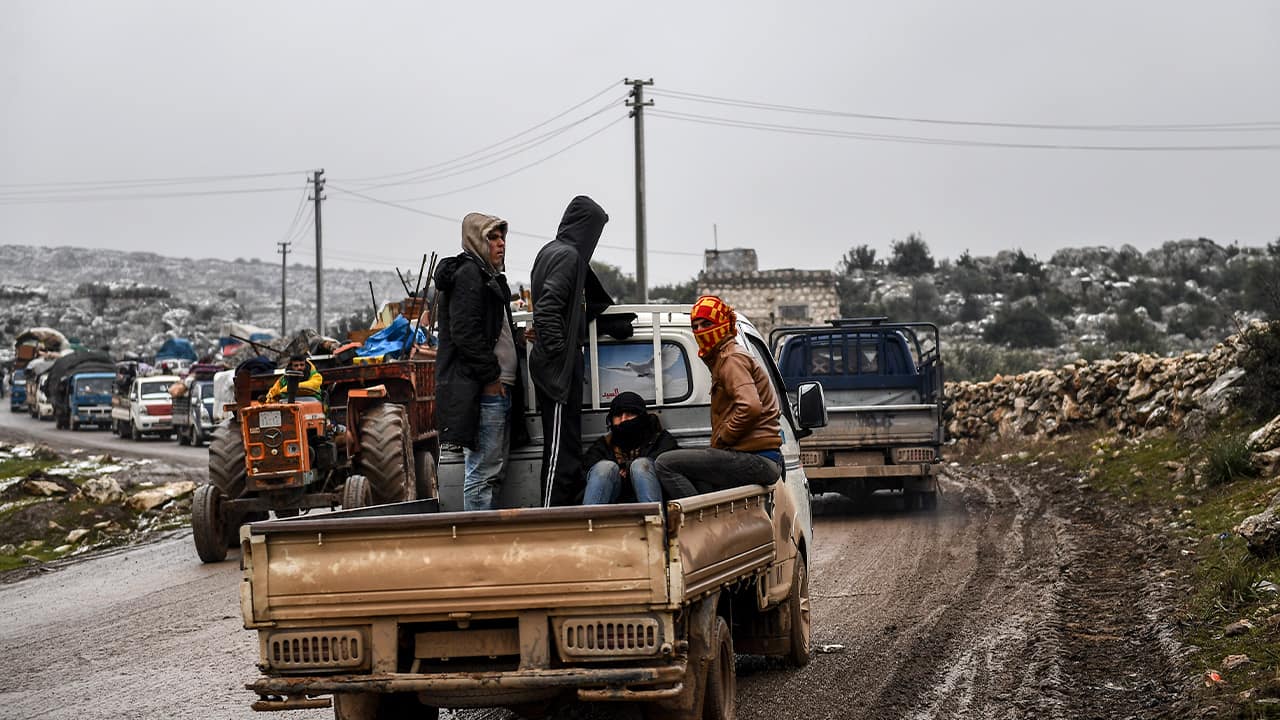 Syrian civilians flee from Idlib in rain toward the north to find safety inside Syria near the border with Turkey, Thursday, Feb. 13, 2020. Syrian troops are waging an offensive in the last rebel stronghold according to news reports by a Turkish news agency.( AP Photo)

The Syrian War Has Pulled in International Players Including the US, Russia and Turkey

Turkey, a sponsor of the cease-fire and a backer of the opposition, has sent thousands of troops into the area to stall the advances, sparking rare direct confrontations with Syrian troops.

The Syrian war, now in its ninth year, has pulled in international players including the U.S., Russia and Turkey. Russia has supported the Syrian government troops while the U.S. has led an international coalition fighting Islamic State group militants.

Also on Thursday, the U.S. military acknowledged its troops fired on and killed a Syrian combatant when government supporters attacked an American convoy in northeastern Syria a day earlier.

The clash Wednesday was a rare direct confrontation between a Syrian pro-government group and U.S. troops deployed in the increasingly crowded terrain near the border with Iraq and Turkey.

A convoy of U.S. armored vehicles drove into a government-controlled area and was attacked by pro-government supporters, including armed men who fired at the soldiers and pelted them with stones and Molotov cocktails.

The U.S. maintains hundreds of troops in the area. In recent weeks, and following a Turkish invasion of villages and towns along its borders, the area has been swarming with Russian, Syrian government and Turkish troops. They are deployed in part to maintain the peace but also in the latest tug over territorial control in Syria’s conflict.

The U.S. maintains lines of communication with Russia, Damascus’s ally, to avoid such confrontations. It wasn’t clear if the route was de-conflicted.

Videos showed government supporters attacking the vehicles and two men firing small arms at the convoy, which was flying the U.S. flag. Some residents pelted the convoy with stones, while another dumped a bucket full of dirt on the back of one vehicle.

U.S. soldiers were seen standing in the middle of the melee, trying to disperse the crowd. One U.S. vehicle was stuck in the dirt, apparently having veered into a ditch, while another had a flat tire.