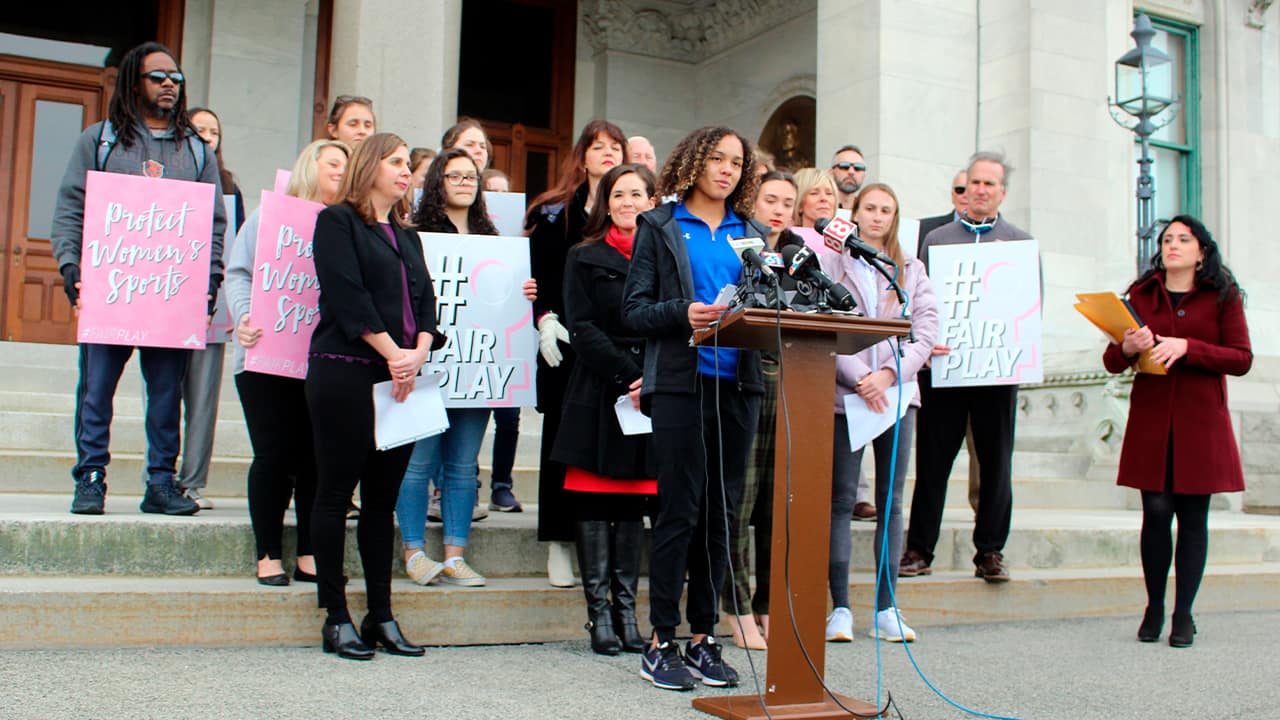 FILE – In this Feb. 7, 2019, file photo, Bloomfield High School transgender athlete Terry Miller, second from left, wins the final of the 55-meter dash over transgender athlete Andraya Yearwood, far left, and other runners in the Connecticut girls Class S indoor track meet at Hillhouse High School in New Haven, Conn. Miller and Yearwood are among Connecticut transgender athletes who would be blocked from participating in girls sports under a federal lawsuit filed Wednesday, Feb. 12, 2020, by the families of three athletes. (AP Photo/Pat Eaton-Robb, File)

The lawsuit follows a Title IX complaint filed last June by the girls’ families and the Alliance Defending Freedom with the U.S. Education Department’s Office for Civil Rights, which is investigating the policy.
The lawsuit centers on two transgender sprinters, Terry Miller and Andraya Yearwood, who have frequently outperformed their cisgender competitors.
The two seniors have combined to win 15 girls state indoor or outdoor championship races since 2017, according to the lawsuit.
The three plaintiffs have competed directly against them, almost always losing to Miller and usually behind Yearwood. Mitchell finished third in the 2019 state championship in the girls 55-meter indoor track competition behind Miller and Yearwood.
“Our dream is not to come in second or third place, but to win fair and square,” Mitchell said. “All we’re asking for is a fair chance.”
Yearwood, a senior at Cromwell High School, and Miller, a senior at Bloomfield High School, issued statements vehemently defending their right to run in girls events.
“I have faced discrimination in every aspect of my life and I no longer want to remain silent,” Miller said. “I am a girl and I am a runner. I participate in athletics just like my peers to excel, find community, and meaning in my life. It is both unfair and painful that my victories have to be attacked and my hard work ignored.”
Yearwood said she also is a girl and has been hurt by the efforts to “tear down my successes.”


“I will never stop being me! I will never stop running! I hope that the next generation of trans youth doesn’t have to fight the fights that I have. I hope they can be celebrated when they succeed not demonized. For the next generation, I run for you!” — Andraya Yearwood, transgender sprinter
The American Civil Liberties Union said it will represent the transgender teens and defend the Connecticut policy in court. Attorney Chase Strangio, deputy director for Trans Justice with the ACLU LGBT & HIV Project, said transgender girls also are protected by Title IX.
“The idea that the law only protects the individuals with XX chromosomes as compared to individuals with XY chromosomes is found nowhere in the legislative history of Title IX, in any implementing regulation or in any other aspect of the interpretation of Title IX over the last 50 years by the courts,” he said.
The attorneys for Alliance Defending Freedom is asking the court to prevent the transgender girls from competing while the lawsuit moves forward. No hearing date on that request had been scheduled Wednesday, the day before the state’s indoor track championships begin.
Connecticut is one of 17 states that allowed transgender high school athletes to compete without restrictions in 2019, according to Transathlete.com, which tracks state policies in high school sports across the country. Eight states had restrictions that make it difficult for transgender athletes to compete while in school, such requiring athletes to compete under the gender on their birth certificate, or allowing them to participate only after going through sex reassignment procedures or hormone therapies, according to Transathlete.
Yearwood and Miller have said they are still in the process of transitioning but have declined to provide details.