Life on the Diamond Princess, the cruise ship quarantined in a Japanese port with scores of cases of a new virus, means experiencing all these things, according to interviews by The Associated Press with passengers and a growing stream of tweets and YouTube videos.

At times there’s been an almost festive atmosphere, as when locals on Jet Skis buzzed the ship, shouting greetings. Other times, there was deep worry as new cases are confirmed, pushing the total to 218 — the largest cluster of infections outside China. Five of those patients have severe symptoms and are in intensive care or on artificial respirators, Japan’s health ministry said.

Others have reported surprisingly mild symptoms, including one Australian woman who described the initial terror of being whisked to a hospital while covered in protective plastic.

The days pass with petty frustrations and inconveniences — cramped rooms, dirty sheets, boring food — and difficult work for the hundreds of crew members.

With the number of illnesses increasing, there’s also a nagging doubt about whether this kind of quarantine works. Some experts question if keeping some 3,500 passengers and crew in such close quarters might spread the viral disease, recently named COVID-19.

With another week or more of quarantine to come, the AP looks inside the vacation cruise that’s gone seriously off course: 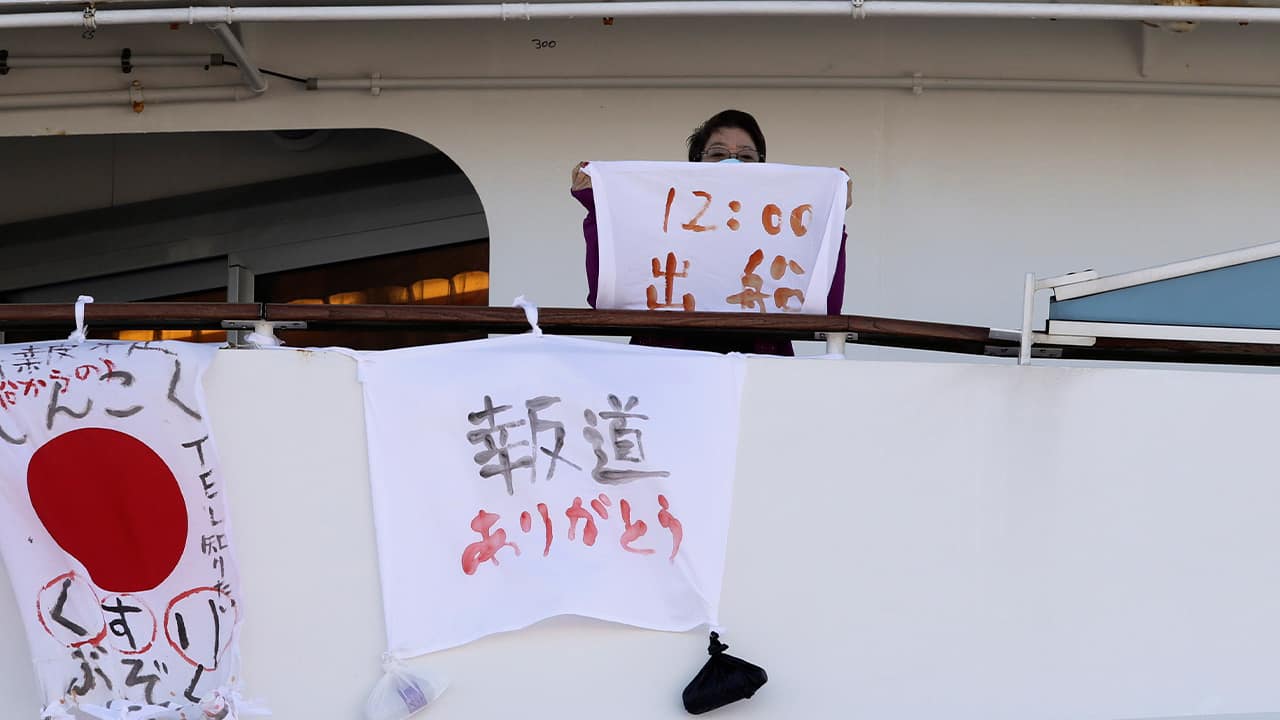 FILE – In this Feb. 11, 2020, file photo, a woman holds a piece of cloth with the ship’s departure time written on it while quarantined on the Diamond Princess cruise ship at the Yokohama Port in Yokohama, near Tokyo. Life on board the luxury cruise ship, which has dozens of cases of a new virus, can include fear, excitement and soul-crushing boredom, according to interviews by The Associated Press with passengers and a stream of tweets and YouTube videos. (AP Photo/Jae C. Hong, File)

Even during the quarantine, it can seem like Cheryl and Paul Molesky are still on vacation.

“We try to have an upbeat presentation and make sure that our attitude comes across that, we’re not hurt, we’re not in pain, … we’re actually just enjoying ourselves. It’s been very nice.” — Paul Molesky, a 78-year-old potter

The couple from Syracuse, New York, can be seen in their YouTube videos lounging, often in plush bathrobes, on their balcony, enjoying the sweeping views of a glittering, sun-streaked ocean and, on occasion, snow-capped Mount Fuji.

“We try to have an upbeat presentation and make sure that our attitude comes across that, we’re not hurt, we’re not in pain, … we’re actually just enjoying ourselves,” Paul Molesky, a 78-year-old potter, said in an interview. “It’s been very nice.”

There was the time a man came to the docks in a Spider-Man costume and played music for an hour and a half to the delight of the passengers.

And the time, early in the quarantine, when eight people on Jet Skis cruised up, yelling out “Welcome!” and playing music. The passengers clapped and waved from their balconies.

The ship, which has 17 decks, has upped its internet service, and Cheryl Molesky spends several hours each day answering emails and texts and editing their YouTube videos.

“Now that we’re here in quarantine we’re getting so much attention. We never get that much attention at home,” the 59-year-old retired art and media teacher said.

There’s definite concern each time a new batch of confirmed cases is announced. But, she said, “Rather than just sit here and worry about, are we going to get the coronavirus, we decided to make the most of every day, and just forget about that for now. If it happens, it happens.”

Elsewhere on the ship, a Japanese man in his 30s who refused to give his name because of privacy concerns said he spends his days mostly taking photos of each meal and posting them anonymously on Twitter.

The ship has a sushi restaurant, Japanese style bath and theater, but passengers are now mostly confined to their rooms. Many cabins — spread across decks with names such as Aloha, Dolphin and Emerald — are as small as, if not smaller, than many hotel rooms.

More affordable rooms are not much wider than a double bed and don’t have much seating space aside from a desk chair, according to pictures posted on the ship’s website. The cheapest ones don’t even have windows. Many balcony rooms are around 222 square feet or less, the website said. A lot of the interior rooms, which feature large mirrors in place of a window, are only 158 to 162 square feet.

Guests must often change their own sheets, clean their bathrooms and do their own laundry because contact with the crew has been limited since the first 10 cases were confirmed on board.

The days often revolve around food service. Knocking on four doors at once, an elaborate delivery choreography takes place: one masked and gloved crew member hands out the plates, another the silverware, while another checks off names and room numbers.

The boat has added more movies and TV channels to try to help with the boredom. People without balconies are allowed to walk on the deck for about an hour each day, as long as they keep 6 feet (2 meters) apart. Passengers chat and wave to each other from their balconies.

Passenger Matthew Smith has been compiling regular food reviews on Twitter, and often details his attempts to get extra coffee. He tweeted that he feels, while sitting in his room between meals, just like his cat “waiting for her daily serving of canned food. Is it time? Is it time?”

For the Japanese man on the ship, the food is one of the biggest reasons he wants to leave. “I miss Japanese food.” 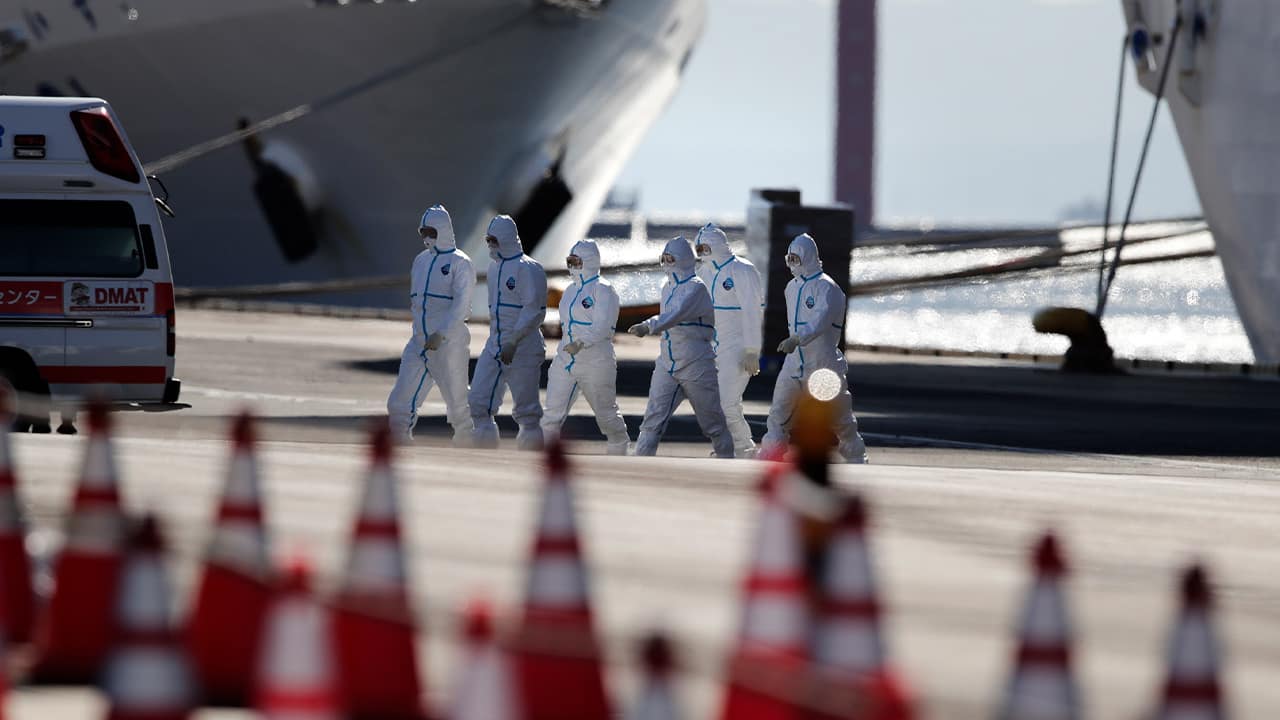 FILE – In this Feb. 11, 2020, file photo, medical workers with protective suites walk away from the quarantined Diamond Princess cruise ship in Yokohama, near Tokyo. Life on board the luxury cruise ship, which has dozens of cases of a new virus, can include fear, excitement and soul-crushing boredom, according to interviews by The Associated Press with passengers and a stream of tweets and YouTube videos. (AP Photo/Jae C. Hong, File)

In a recent video posted on Twitter, a group of men wearing Diamond Princess jackets, masks and what appear to be the uniforms of kitchen workers stood before a camera.

“We are scared. We appeal to the Indian government and the United Nations to help us, segregate us urgently,” a man identified as crew member Binay Kumar Sarkar said after removing his mask. “We should be rescued immediately and reunited with our families before it is too late.’’

Some crew members who’ve tested positive for the virus are restaurant, bar or housekeeping staff who most likely had contact with passengers until Feb. 5 when the first test results were released and restaurants and bars were closed.

“Until the quarantine started, everything was business as usual, and everyone was freely moving around on board, so there are various possibilities of infection during that time,” said Kazuho Taguchi, director of global health cooperation at the health ministry.

“We are scared. We appeal to the Indian government and the United Nations to help us, segregate us urgently. We should be rescued immediately and reunited with our families before it is too late.’’ — a man identified as crew member Binay Kumar Sarkar

Crew members still share rooms, as the number of cabins for them is limited, Taguchi said.

One crew member, though, said he had been isolated in his own 6-by-10-foot cabin on the third deck near sea level for two days after he reported a sore throat.

“Everyone on the ship is scared. Many people are falling sick, and now the crew’s getting sick too,” he said, requesting that his name not be used because workers have been told not to post anything about the situation on the ship to social media.

While awaiting the results of a throat swab, he has been reading all the news he can find about the ship, and responding to worried friends and family.

Authorities in Japan say isolating people on board is the way to prevent the disease’s spread; other experts say the measure could create more infection.

“More and more people are getting infected by people still in the incubation period or without symptoms while they are trapped on the ship, which is not good for disease prevention,” Reiji Goto, a physician at the department of infectious diseases at Daiyukai General Hospital in Ichinomiya, told TBS television on Tuesday.

A hospital — not a ship — is the best place to keep people quarantined, according to Tara Smith, a professor who researches infectious diseases at Kent State University’s College of Public Health. The Diamond Princess may have already had environmental contamination when the quarantine began, which puts passengers and crew at risk of further transmission.

“I think this was done without a lot of thought to consequences of ongoing transmission within the ship and the mental health of the passengers,” Smith said.

For some, the fear might be worse than the virus.

On Thursday, an Australian mother and daughter wearing face masks described being taken off the ship and to a hospital after the daughter tested positive for the virus.

“They put me in, like, a wheelchair, sort of, and put like a plastic — almost like a bubble around it — and they were just wheeling me everywhere,” Bianca D’Silva, a 20-year-old law student, told Australia’s Nine Network television.

Bianca and her mother, Suzanne, said they were both briefly ill, but feel fine now.

“Honestly, it just felt like your everyday cold. Like, I feel absolutely fine now, physically,” Bianca said. “I had a bit of headache before and just a slight fever but that’s about it, honestly.”