WELLINGTON, New Zealand  — Drought, wildfires and now flooding have given Australia’s weather an almost Biblical feel this year. The good news is that a recent deluge in eastern parts of the country has drenched deadly fires and helped ease a crippling drought.

“At this stage, it’s very good news, and certainly much more than people could have wished for or expected. There are some very happy people.” — Quentin Grafton, an economics professor and water expert at Australian National University in Canberra

But experts say it will take some time yet to know to what extent the rainfall has replenished dried-up rivers and quenched parched soil in some inland areas most affected by the 3-year drought.

Quentin Grafton, an economics professor and water expert at Australian National University in Canberra, said the rain had broken the drought in some towns but had not fallen evenly across all the affected areas.

“At this stage, it’s very good news, and certainly much more than people could have wished for or expected,” he said of the rainfall. “There are some very happy people.”

Grafton said drought had badly affected an area of more than 1.5 million square kilometers, which is larger than the country of Ethiopia. He said monitoring on major rivers over the coming days should provide a clearer picture of how much the rain has helped.

Fire authorities had a reason to celebrate, with many wildfires being extinguished or significantly dampened down by the rain. On Saturday, authorities declared the Currowan Fire south of Sydney was finally out after destroying more than 300 homes and razing 500,000 hectares over two-and-a-half months.

“This is the most positive news we’ve had in some time,” the New South Wales Rural Fire Service tweeted on Monday. ”The recent rainfall has assisted firefighters to put over 30 fires out since Friday. Some of these blazes have been burning for weeks and even months.” 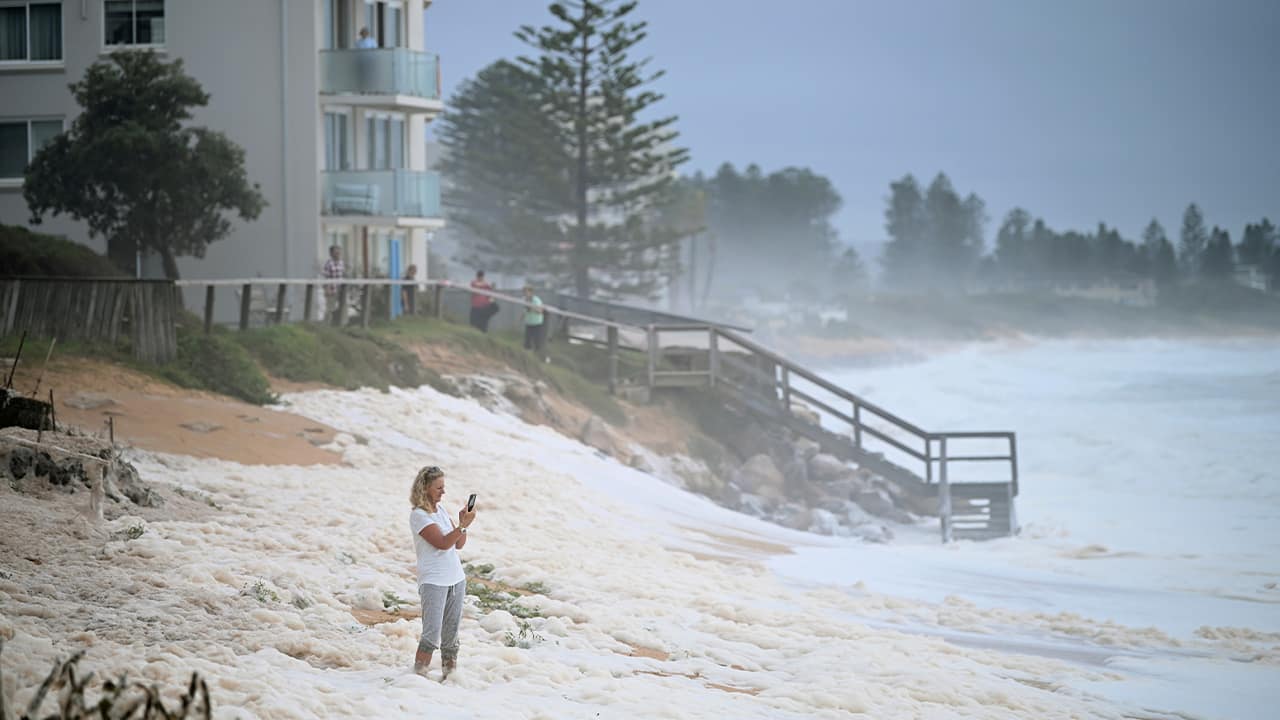 A resident inspects sea foam brought by waves approaching on beach front houses after heavy rain and storms at Collaroy in Sydney’s Northern Beaches, Monday, February 10, 2020. Drought, wildfires and now flooding have given Australia’s weather an almost Biblical feel this year. The good news is that a deluge in eastern parts of the country over recent days has helped dampen deadly fires and ease a crippling drought. (Joel Carrett, AAP Image via AP)

In all, Australia’s wildfires killed at least 33 people and destroyed more than 3,000 homes.

The fires began causing widespread destruction toward the end of 2019, which was both the hottest and driest year in Australia’s recorded history, according to the Bureau of Meteorology.

During the deluge over recent days, coastal areas have experienced some of the heaviest rainfalls, which has caused flash flooding in some places. Sydney, the central coast and the Blue Mountains received up to 400 millimeters since Friday, representing some of the heaviest falls in decades.

Dams in the greater Sydney area were more than 64% full on Monday after being only 42% full a week earlier, according to officials. More rain is forecast over the coming days.

But not everybody was ready to begin celebrating. Darryl Cowie, the owner of the Burke & Wills Menindee Motel in the Outback town of Menindee, said they’d received only a small amount of rain overnight.

“The ground was damp, but it’s drying out again now,” he said. “It’s not enough to do anything.”

Cowie said he has been serving guests bottled water for about a year now, ever since the tap water became discolored and salty tasting due to the drought. He said the town has since switched to bore water, which has improved the quality.

“There are clouds that have come past, but by the time they reach us, they’re empty,” he said. “We’re keeping our fingers crossed. Sydney is copping it, but it’s a long way from here.”