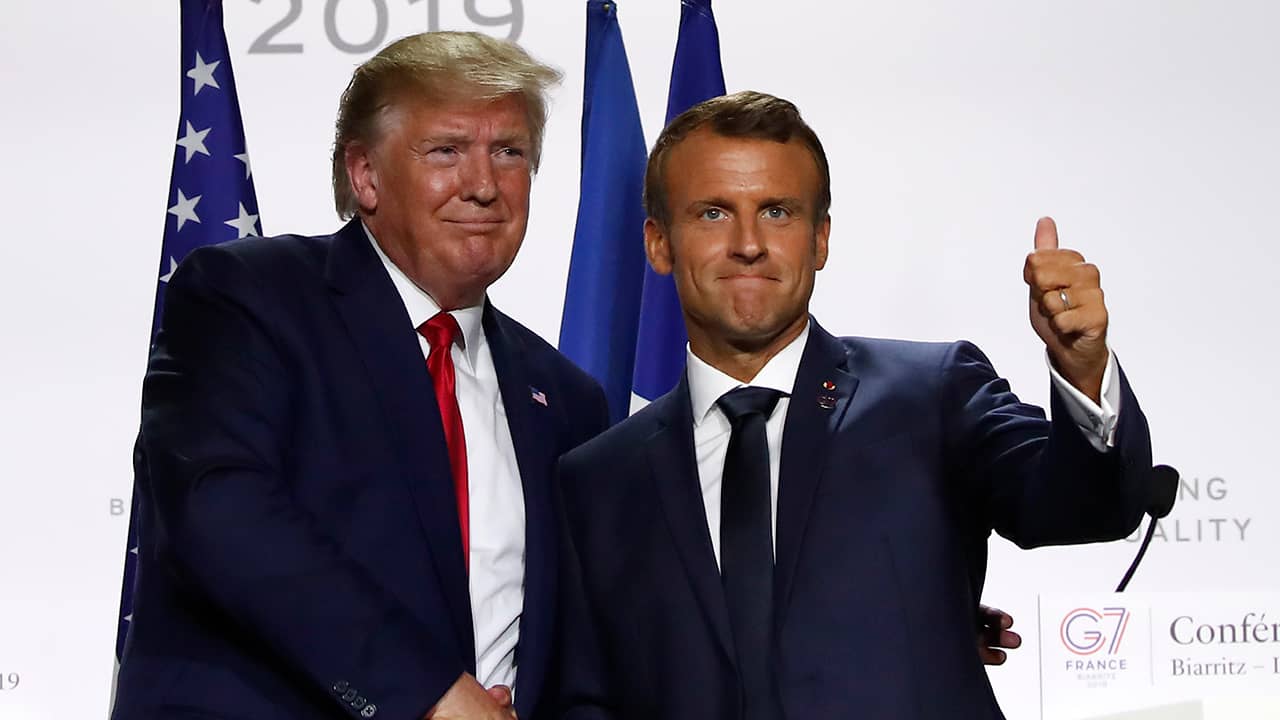 For American politics, it’s been a week for the ages: a bungled start to the 2020 presidential primary season, a State of the Union speech with partisanship on full display and a conclusion to the most contentious chapter of all — the nation’s third-ever impeachment trial.
Watching all this from afar are allies, foes and those who have looked to the United States for stability. Here, from AP correspondents in four regions, is a look at how some key American allies are eyeing the 2020 U.S. election and the jumbled months that precede it — whether in the hope that Donald Trump’s Republican presidency continues for a second term or that a Democrat returns to the White House.

It’s safe to say that many in France are viewing the U.S. election through their own prism — four years during which one of the world’s oldest international alliances has been bashed around.
“Since President Trump’s arrival, we’ve felt a considerable distance with dear America,” says Jacques Mistral, a French former prime ministerial and government economics adviser and former financial affairs adviser at the French Embassy in Washington. “He has alienated everybody.”


“Since President Trump’s arrival, we’ve felt a considerable distance with dear America. He has alienated everybody.” — Jacques Mistral, a French former prime ministerial and government economics adviser and former financial affairs adviser at the French Embassy in Washington
Famously muscular white-knuckle handshakes between Trump and French President Emmanuel Macron have served as metaphors for a difficult, turbulent relationship. On issues that are dear to Macron — notably battling climate change and trying to prevent Iran from developing nuclear weapons — there have been sharp divergences. The experience of losing the White House’s ear on such key issues has been somewhat humbling for France, showing how little it can get done alone on the international stage if Washington is opposed.
“If the United States put all their weight behind not doing something, then there is no chance of that thing happening,” Mistral said.
Though France has had famous disputes in the past with Washington, notably saying “non” to the U.S.-led war that toppled Iraqi leader Saddam Hussein, the feeling in Paris used to be that Washington was dependable and predictable. No longer.
“Uncertainty,” said Mistral, “is now permanent.”
U.S. elections are always watched closely in France, partly because of the weight Washington wields in the world but also because of the vast campaign spending and electoral procedures that have no equivalent in French politics.
This time, the election is liable to be watched even closer still.
“Of course it concerns us,” Mistral said. “The world is getting worse and worse because of the United States now.”
— John Leicester in Paris Britain knows a thing or two about extreme polarization. Ever since the 2016 referendum in which the country voted to leave the European Union, political discourse in this island nation has been riven by division.
Now some here wonder: Can America still claim to be the beacon of democracy and fair play the world over? Or does an advancing tribalism erase the country’s longstanding claim to the title?
“People in Britain are wondering if America really stands for the values of liberal democracy,” said Jeffrey William Howard, an associate professor of politics at University College London. “Is it capable of being the leader of the free world?”
Regardless of the answer, Britain really needs the U.S. right now.
Britain left the EU last week, starting a yearlong transition period in which it will build a new economic relationship between the bloc. There are difficult negotiations ahead as the U.K. goes its own way while trying to preserve links with its biggest trading partner, covering everything from tariffs and product standards to British industry’s ability to recruit foreign workers. The British government also needs to negotiate separate trade deals with individual countries now that the country has broken away.
Prime Minister Boris Johnson’s top trade prize outside the EU is the United States, the world’s biggest economy and the destination for 18% of British exports.
But the Americans have already made challenging demands. Trade in food, for example, and the standards associated with it, come up again and again. Reconciling such things will be difficult because any attempt to meet U.S. demands by lowering British standards will nudge the U.K. further away from the rules it needs to follow in trade with the EU.
So a choice is coming: Will Britain veer more toward the U.S. or stick closer to Europe?
“British citizens are extremely worried that we are going to have to bend over backwards to give the Trump administration what it wants to get a trade deal,” Howard said. “We are not in the same egalitarian relationship we were in when we were part of the EU.”
— Danica Kirka in London

Israelis and Palestinians have a lot riding on the 2020 U.S. presidential election.
Israeli Prime Minister Benjamin Netanyahu has been perhaps Trump’s biggest international fan. Trump has upended decades of U.S. foreign policy by promoting measures favored by Netanyahu and his nationalist allies, such as recognizing Jerusalem as Israel’s capital and moving the U.S Embassy there. He’s also recognized Israel’s annexation of the Golan Heights and pulled out of the nuclear deal with Iran. For a country like South Korea, which hosts 28,500 U.S. troops as a deterrence against its nuclear-armed neighbor, this American election is viewed through a security prism.
For the past two years, President Moon Jae-in has teamed up with Trump to reach out to North Korean ruler Kim Jong Un. A flurry of nuclear diplomacy followed, including three summits between Trump and Kim. But while Trump has touted his globally-watched summits with the previously reclusive Kim as major foreign policy achievements, negotiations have faltered and Pyongyang has made no major steps toward denuclearization.
Inter-Korean relations have been subsequently strained, posing a setback to Moon’s push for greater rapprochement with the North.
Moon has also faced a U.S. president who has openly bemoaned regular military drills with Seoul as “very, very expensive.” Trump has called for Moon’s government to drastically increase its financial contribution to pay for U.S. military deployment on the peninsula.
This has gone against the grain of decades of an airtight alliance forged in the blood sacrificed in the Korean War in the 1950s — ties that no U.S. president until now has ever questioned.
Whether the next U.S. president is Trump or a Democrat, many experts in Seoul feel it’s likely Washington’s stance toward North Korea will harden.
“A re-election will free Trump from political considerations and make it easier for him to employ a harder and more principle-based approach on North Korea,” said Moon Seong Mook of the Seoul-based Korea Research Institute for National Strategy.