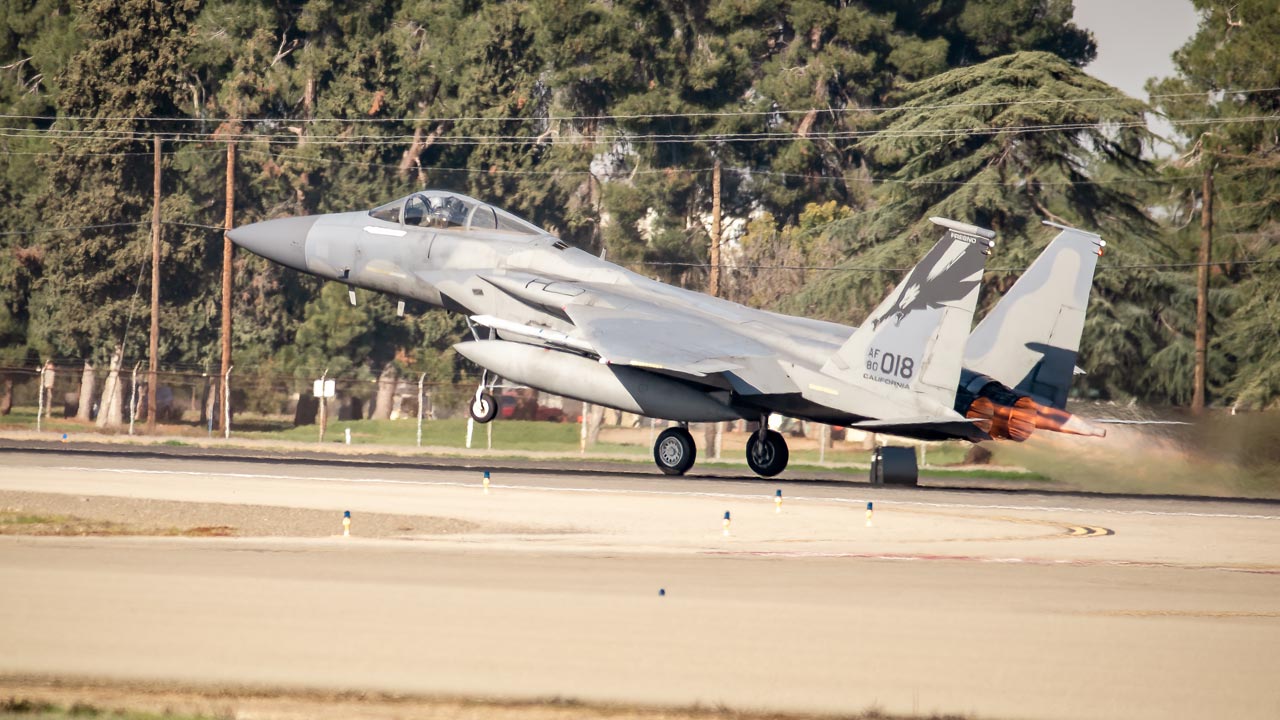 A squadron of Air Force F-16s will streak across local skies for two weeks in March. It’s part of a unique joint exercise with Fresno’s 144th Fighter Wing.
Listen to this article:


Pilots from the 8th Fighter Squadron at Holloman Air Force Base in New Mexico will fly alongside local F-15 Eagle pilots, taking off and landing at the Fresno base each day. Aircraft from Naval Air Station Lemoore may also participate in the training, which begins March 17.

“During the exercise, people in the surrounding area of Fresno and Clovis will see a few more jets taking off every day, said Capt. Skylar Bautista, a pilot with the local base’s 194th Fighter Squadron.
“It really shouldn’t be much more than normal, but they will look different and they will be taking off with the F-15s that (local residents) are used to seeing every day. You may see one or two larger aircraft taking off with us as well,” he said. The single-engine F-16 Fighting Falcons are somewhat quieter than the twin-engine F-15s flown by Fresno’s Air Guard pilots, Bautista noted. “So, hopefully, not really any kind of impact from a noise standpoint,” he said.

In the past, the exercise was called Sentry Griffin. It’s a reference to the mythical beast that serves as the local squadron’s mascot. This year’s version will introduce new training elements that base officials want to emphasize with a more innovative name.
“For instance, in Arizona, there’s an (F-16) Viper squadron. They do ‘Haboob Havoc,'” Bautista said. A “haboob” is a powerful wind storm that kicks up tremendous dust clouds across the desert. “For a short amount of time, they do this exercise that is also really attractive and they offer great training.”
The fighter training exercise has been held for the past 5 years at Luke Air Force Base, outside of Phoenix.
Bautista said Fresno needed an equally memorable name with a local flavor. After soliciting suggestions from the public via the 144th Fighter Wing’s Facebook page, the base chose “Valley Thunder.” 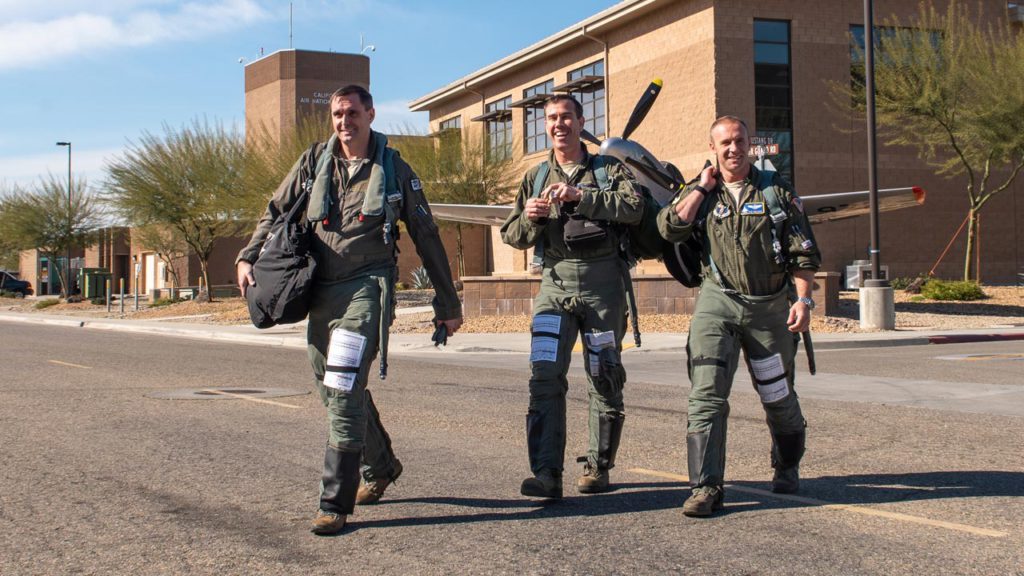 Two a Day Launches from Air Base

During the two weeks of exercises, the squadrons will take off for their missions and return for landings twice each day, in the mornings and afternoons, Bautista said. The actual combat exercises will happen off the California coast and in the Mojave Desert. Both locations will allow pilots to simulate a more authentic war scenario.

“We are basically (simulating) being the aggressor to a nation that might be on the Pacific Ocean. And we have to fight our way into that country,” Bautista explained.

“The second and probably our larger mission that we more train to every day is our air superiority worldwide mission.” — Capt. Skylar Bautista
“If we do well and we establish dominance in that domain, then we’ll push further in. And then in further engagements in the exercise we’ll take off and we’ll actually go over the desert. So Death Valley, Owens Valley, Saline Valley kind of areas. And we will simulate that we’re now pushing further inland to that country.”

While the Air Guard’s first mission, known as Air Sovereignty Alert, is defensive, Bautista said the fighter squadron’s pilots are required to train for external conflicts as well.

“The second and probably our larger mission that we more train to every day is our air superiority worldwide mission,” said Bautista. “So if you are the president of the United States and you have limited resources, you need to be able to tell the 144th Fighter Wing in Fresno — I need you to go to X country on X day, (and) be there at X time. And I need not a single aircraft threatening any of my troops on the ground or any of my other aircraft or or assets for 30 days, 24 days, whatever it is.” 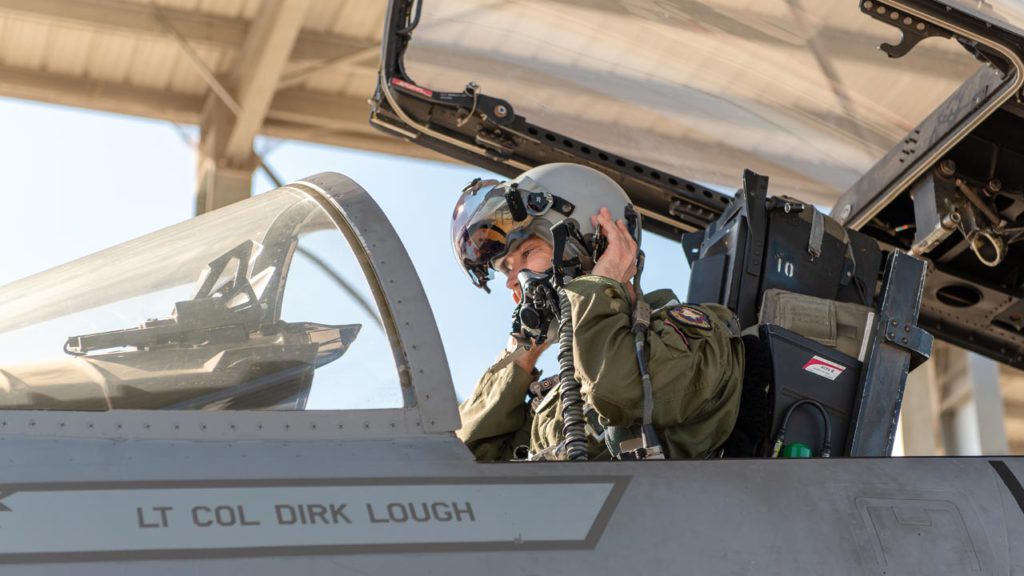 Lt. Col. Kees Allamandola in the cockpit of his F-15C fighter in Fresno prepares for a training mission. (GV Wire/Randy Reed)

Training with and against other squadrons allows the Fresno-based fighter pilots — and their New Mexico counterparts — to enhance their combat skills for whichever mission they’re called to perform.

“What that gives us is practice looking at a different aircraft, maneuvering against the different aircraft. And then, no kidding, the sensors and the data that we’re seeing on our displays look different,” said Bautista. “And it’s better training than when we see the same thing every day and try to pretend that it’s something else.”

The Fresno exercise will also introduce an element of competition this year.

“What we’re going to do is, the good guys, so to speak, have a certain amount of pilots, aircraft, missiles, bullets, and you can’t use more than that for the whole exercise. The bad guys, so to speak, which will have someone in charge of simulating an enemy force and a commander — has all the same limitations,” Bautista said.
As forces and resources are depleted, they will not be replaced.
“So, if we’re down to four jets left and I am defeated, we only have three jets to take off with and fly with the next day. So it is real world.”
This story has been updated to include the newly selected name for the exercise, “Valley Thunder.”