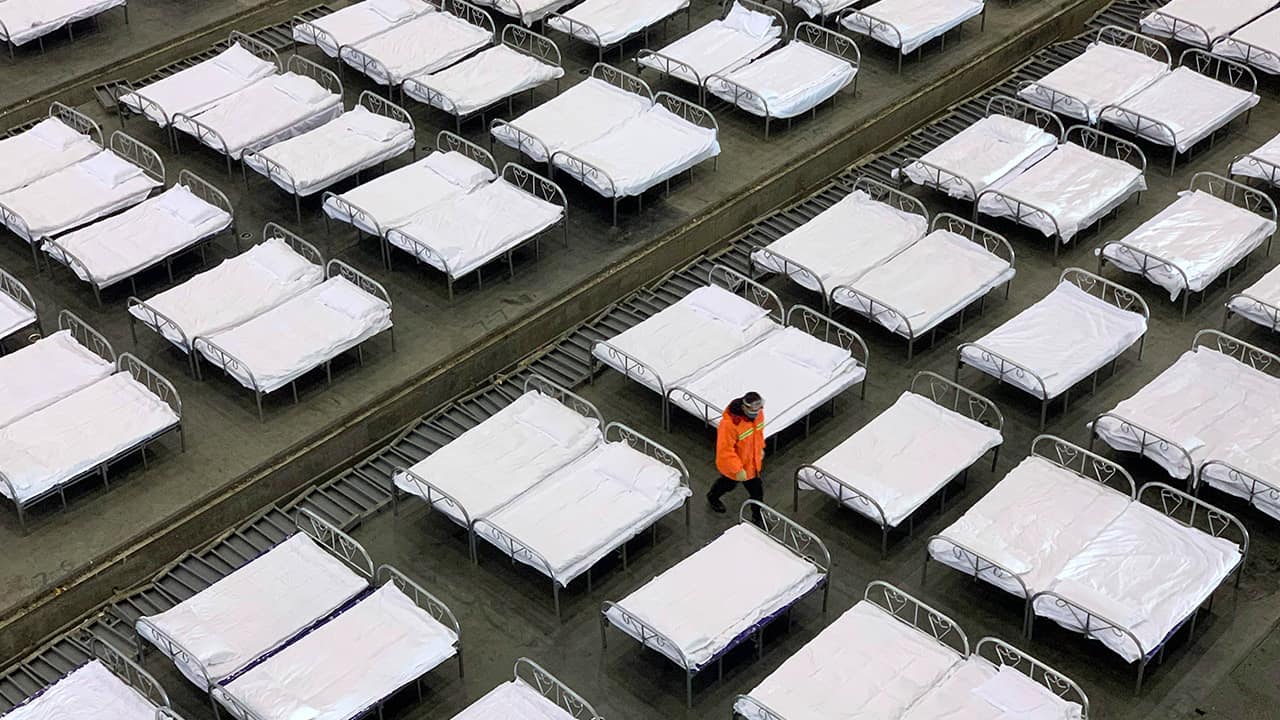 BEIJING — Hong Kong hospitals cut services as thousands of medical workers went on strike for a second day Tuesday to demand the border with mainland China be shut completely. The new virus caused its first death in the semi-autonomous territory, adding to growing fears it is spreading locally. A medical worker in a protective suit writes on a tube after collecting a sample for nucleic acid tests from a suspected virus patient at a hotel being used to place people in medical isolation in Wuhan in central China’s Hubei Province, Tuesday, Feb. 4, 2020. Hong Kong hospitals cut services as thousands of medical workers went on strike for a second day Tuesday to demand the border with mainland China be shut completely, as a new virus caused its first death in the semi-autonomous territory and authorities feared it was spreading locally. (Chinatopix via AP)

China reported 425 deaths and 20,438 confirmed cases, up sharply from the previous day. Outside mainland China, at least 180 cases have been confirmed, including two fatalities, the one in Hong Kong and another in the Philippines.
The patient who died in Hong Kong was a 39-year-old man who had traveled to Wuhan, the mainland city where the outbreak started. The Hospital Authority said Tuesday he had pre-existing health conditions but gave no details.
Most deaths have been among the elderly and those with other health problems, authorities said. More than 80% were over 60 years old, and more than 75% had an underlying disease, Jiao Yahui, a National Health Commission official, told a news conference Tuesday.
Dr. David Heymann, who led the World Health Organization’s response to the SARS outbreak, said it’s too early to tell when the new virus will peak, but that it appears to still be on the increase.
He said the spike in China’s caseload in recent days is partly attributable to the fact that officials have expanded their search to include milder cases, not only people with pneumonia. He declined to predict whether the virus would ultimately cause a pandemic, or worldwide outbreak. WHO defines a pandemic as sustained transmission of a disease in at least two world regions.
Heymann said as the new virus starts to spread beyond China, scientists will gain a better understanding of it. “What we will see is the clearer natural history of the disease,” he said, as those exposed to the virus “are being traced and watched very closely,” he said.
Nevertheless. WHO director-general Tedros Adhanom Ghebreyesus urged countries to share more data on infections outside China, adding that detailed information has only been provided on 37 cases.

China Has Struggled to Maintain Supplies of Face Masks

“Without better data, it’s very hard for us to assess how the outbreak is evolving or what impact it could have and to ensure we’re providing the most appropriate recommendations,” he said.


“Without better data, it’s very hard for us to assess how the outbreak is evolving or what impact it could have and to ensure we’re providing the most appropriate recommendations.” — WHO director-general Tedros Adhanom Ghebreyesus
Thailand confirmed six more cases Tuesday, raising its total to 25, the highest outside China. Two were motorcycle taxi drivers who had driven for Chinese tourists. Earlier a Thai taxi driver was also diagnosed with the virus. The cases are concerning because they suggest the virus can spread more easily between people.
Meanwhile, the leader of the gambling enclave of Macao asked the city’s casino bosses to suspend operations to prevent further infections after a worker at one of the resorts tested positive for the virus. Macao has recorded 10 cases in all.
WHO officials reported slower progress than expected in equipping laboratories across Africa to test for the new virus. No confirmed cases have been reported on the continent, but WHO health security adviser Dr. Ambrose Talisuna said the risk is “very, very high.”
China has struggled to maintain supplies of face masks, along with protective suits and other items, as it seeks to enforce temperature checks at homes, offices, shops and restaurants, require masks be worn in public and keep more than 50 million people from leaving home in Wuhan and neighboring cities.
The European Union office in Beijing said member states have shipped 12 tons of protective equipment to China, with more on the way.
Germany’s Lufthansa became the latest international airline to suspend flights to China, and several countries are barring Chinese travelers or people who passed through China recently. Japan Airlines and All Nippon Airways said they were cutting back flights to several Chinese cities from mid-February to late March. Commuters wear face masks to protect themselves from air pollution and the spreading coronavirus in Bangkok, Thailand, Tuesday, Feb. 4, 2020. On Tuesday, the Korea Centers for Disease Control and Prevention said a 42-year-old South Korean woman tested positive for the virus, days after she returned from a trip to Thailand with chills and other symptoms. (AP Photo/Gemunu Amarasinghe)

Such Scenes Have Revived Memories of the Sars Outbreak

In Wuhan, patients were being transferred to a new 1,000-bed hospital that was built in just 10 days, its prefabricated wards equipped with state-of-the-art medical equipment and ventilation systems. A 1,500-bed hospital also specially built is due to open soon.
Elsewhere in Wuhan, authorities were converting a gymnasium, exhibition hall and cultural center into hospitals with a total of 3,400 beds to treat patients with mild symptoms. Television video showed beds placed in tight rows in cavernous rooms without any barriers between them.
Authorities hope that will help relieve what is being described as an overwhelmed public health system in Wuhan and surrounding areas.
One man, Fang Bin, said he saw wards so crowded during a visit to the city’s No. 5 Hospital on Saturday that some patients were forced to sit on the ground.
“There are too many patients, it’s overcrowded,” Fang told The Associated Press. He said he was taken from his home and questioned by police after he posted a video of what he saw online.
Such scenes have revived memories of the SARS outbreak that began in China and spread worldwide. The new virus is believed to be much less virulent, however.
Meanwhile, Japanese officials were conducting medical checks on some 3,700 passengers and crew on board a cruise ship docked off the port of Yokohama after a passenger tested positive after leaving the vessel while it was in Hong Kong. At least 133 people who have symptoms or had close contact with the infected man have been identified and any confirmed to have the virus will be sent to hospitals for isolation treatment, health ministry officials said.


Related Story: US Bars Foreigners Coming from China for Now Over Virus Fear

US Adds 'Low Yield' Nuclear Weapon to Its Submarine Arsenal

At Least Half of Iowa Results Expected Today, Dems Say