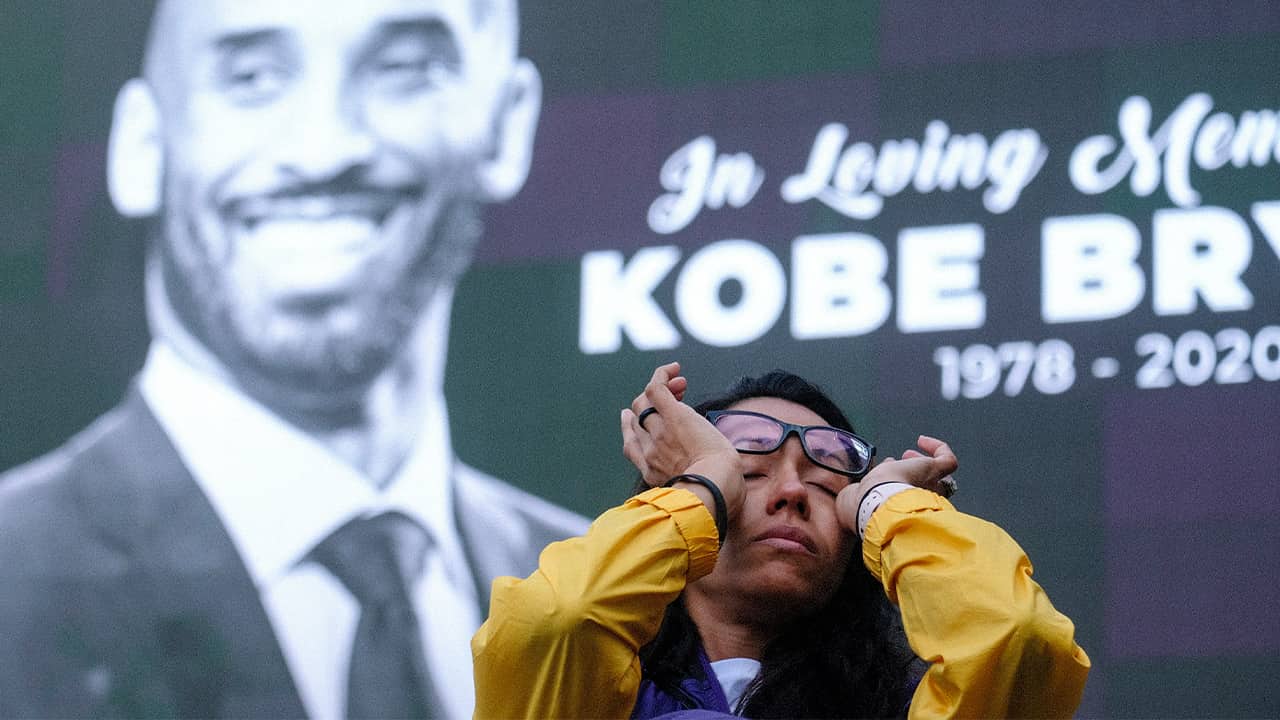 LOS ANGELES — Fans call it The House that Kobe Built, and since Kobe Bryant’s shocking death in a helicopter crash mourners by the thousands have gathered outside the glistening steel-and-glass edifice where the Los Angeles Lakers legend made so much basketball history.

The arrivals at downtown Staples Center began soon after word spread that Bryant and his 13-year-old daughter, Gianna, were among nine people killed in Sunday’s crash. They continued unabated Monday as people took off from school or work to pay respects to a man with whom many felt a kinship. “The memories that he gave us as a family were great memories,” said Lawrence Perez or North Hollywood, who arrived with his wife, Maureen, and 15-year-old daughter, Desiree. “We could have been at home, but we wanted to be with other people who are kind of going through the same thing.”
The Lakers had a game scheduled Tuesday night against the LA Clippers at Staples Center but the NBA postponed it “out of respect” for the Lakers. The next Lakers home game is Friday night against Portland.
The Staples Center, home to the Lakers and Clippers, opened for the 1999-2000 season, just as a 21-year-old Bryant was blossoming. That season the team would win the first of five championships over the next 10 years.
Although the mood there Monday was often somber as people hugged and wiped away tears, many couldn’t help but grin at times as they recalled joyful moments Bryant brought to their lives.
“The greatest moment was when I got his autograph his rookie year,” Perez said, recalling how he told the teenage Bryant he was destined for greatness. Bryant smiled, shook his hand and said he hoped he’d just break into the team’s starting lineup sometime soon.

‘It Was Different When You Saw Kobe Play’

Perez had planned to bring that ball to Bryant’s Hall of Fame induction, expected later this year, and ask him to sign it again.
“But that’s not going to happen now,” he said softly as his wife hugged him and said, “He cried when he heard the news.” As people arrived at the arena they were greeted by a gigantic display of flowers, balloons, votive candles (some with Bryant’s photo on them), hats, jerseys, statuettes of angels and photos and paintings of Bryant and his daughter circling the entire area. Some showed father and daughter with angel’s wings. Others contained personal messages written in English, Spanish and Chinese, showing the international impact Bryant’s career had.
“I left my shoe for him,” said Louie Guerrero of Los Angeles, who arrived at the memorial pushing a stroller with his 2-year-old daughter, Lexie, decked out in her own little Lakers uniform. He spontaneously decided to add one of his official Lakers basketball shoes to the memorial after scribbling on it, “We Love You, Kobe.”
He walked away with only a sock on his left foot.
Nearby, Michelle Rodriguez of Los Angeles wiped away a tear as she gazed at photos of Bryant with his daughter and his teammates. The 30-year-old emergency room nurse had arrived with her 12-year-old bulldog, Canelle, after working an overnight shift. Both were wearing Lakers jerseys.
“I think everyone could say we loved the team as a whole, but it was different when you saw Kobe play,” she said.

“And he was such an awesome man outside of basketball too,” she added. “All the work he did in the community, he’s a hero to this city.”