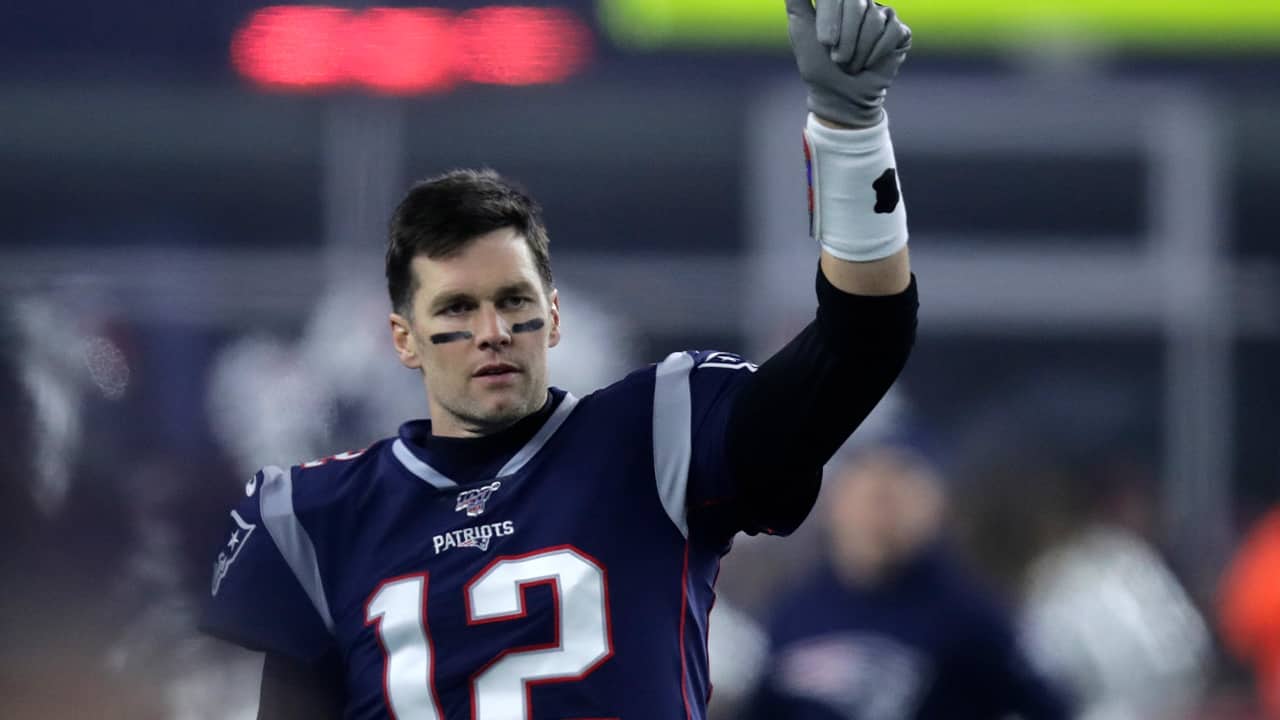 Tom Brady has been synonymous with the AFC championship for the last two decades.
Thirteen times he played for the Lamar Hunt Trophy and nine times he won it, besting MVP Patrick Mahomes in overtime, upending Blake Bortles in a classic comeback, denying Andrew Luck and Philip Rivers trips to the Super Bowl, foiling Ben Roethlisberger twice and Kordell Stewart once, and splitting two games with Joe Flacco.
Peyton Manning he bested once but three other times he lost to his rival in the conference title game.
Sunday’s showdown between the throwback Tennessee Titans (11-7) and the top-seeded Kansas City Chiefs (13-4) marks the first AFC championship game since 2010 without Brady barking under center and Bill Belichick scowling on the sideline.
It’s also the first time since 2002 that the AFC championship doesn’t include Brady, Manning or Roethlisberger.
The star attractions this time are the Titans’ bulldozing running back Derrick Henry, the man most responsible for putting an end to New England’s pre-eminence and for trampling the high hopes in Baltimore after All-Pro Lamar Jackson played his position in 2019 unlike any other quarterback in the league’s first 100 years. FILE – In this Jan. 10, 1982 file photo, Cincinnati Bengals quarterback Ken Anderson, left, prepares to throw during the AFC championship game against the San Diego Chargers in Cincinnati. Cincinnati Bengals coach Forrest Gregg called the Freezer Bowl — a 27-7 win over the San Diego Chargers on Jan. 2, 1982 — worse than the Ice Bowl on Dec. 31, 1967, when he was an offensive lineman for Vince Lombardi’s Packers in the most famous cold-weather game in NFL history. (AP Photo/File)

Reigning league MVP Mahomes produced an astonishing 51-7 response to the 24-0 hole the Chiefs found themselves in against Houston in the divisional round last week. So consummate was Kansas City’s comeback that the Chiefs ran out of fireworks they shoot off to celebrate their touchdowns at Arrowhead Stadium.
Before Brady made the AFC title game his personal playground, John Elway, Bob Griese and Terry Bradshaw built their reputations in the big games that secured Super Bowl appearances for the eventual Hall of Famers.
Two decades before winning two AFC titles from the front office with Manning as his quarterback, Elway engineered five victories for the Denver Broncos from the huddle, including classics such as ” The Drive ” and “The Fumble” against the Cleveland Browns.
He won Super Bowls following his last two conference championship appearances and another with Manning, who toppled Brady 20-18 in the 2016 AFC title game in the 17th and final meeting between the two greatest quarterbacks of the 21st century.
Griese led Miami to three consecutive AFC trophies in the years following the 1970 merger, including a win over Pittsburgh and Bradshaw during the only undefeated season in league history.
Bradshaw bounced back to win four AFC titles in six seasons, parlaying each of them into a Super Bowl ring.
Jim Kelly won a record four consecutive AFC championships in the 1990s, but heartbreaking Super Bowl losses followed each of them during a streak of 13 consecutive victories by the NFC representative.
Elway snapped the streak with an upset of Brett Favre and the Green Bay Packers in Super Bowl 32 after beating the Steelers 24-21 for the AFC title, providing the first ring for the celebrated QB class of 1983, which had gone 0-9 in Super Bowls.

The Drive & The Fumble

After Bernie Kosar put the Browns ahead 20-13 with a 48-yard touchdown pass with 5:43 left in the AFC championship in Cleveland on Jan. 11, 1987, Broncos returner Ken Bell couldn’t handle a knuckleball of a kickoff that teammate Gene Lang recovered at the Denver 2.
Broncos coach Dan Reeves was resolute.
“Whenever you have John Elway as your quarterback, you’ve got a chance,” Reeves said.
Elway poked his head into the huddle and hollered, “Let’s go!” above the din of 79,915 roaring fans.
Fifteen plays and 98 yards later, Mark Jackson dived into the end zone to catch Elway’s touchdown pass with 37 seconds left, and Rick Karlis’ extra point tied it.
Then, 41 seconds into overtime, Elway and the Broncos took over again and, with two passes covering 50 yards, they marched to the Cleveland 15 before Karlis kicked the winning field goal.
“The day before a big game, you dream of doing things like that,” Elway said after beating both the heavily favored Browns and the longest of odds.
“That drive probably is something I might be able to do again,” Elway said.
A year later, it wasn’t “The Drive” that broke Cleveland hearts but “The Fumble.”
The Browns trailed 38-31 at Mile High Stadium when Earnest Byner fumbled at the Denver 2 with a minute remaining and cornerback Jeremiah Castille recovered. Denver punter Mike Horan ran out of the end zone for a safety with 8 seconds to play.
“Last year, I felt elated. This year, I feel numb,” Reeves said afterward. “I know the Cleveland Browns feel terrible.”

In the AFC championship match in Denver on Jan. 24, 2016, Brady and Manning met for the 17th and final time.
“I don’t know that there’ll ever be another rivalry — or has been a rivalry — like it” in football, said Elway, who faced fellow Hall of Famer Dan Marino just twice in his playing career.
Brady had won 11 of their meetings but had split four playoff games, with Manning beating him in the conference championship with the Colts and Broncos.
“This is Jesse James and Wyatt Earp standing out in the street at high noon for the last showdown,” Joe Theismann said before the game.
Manning was the last man standing this time when Bradley Roby’s interception of Brady’s 2-point pass in the closing seconds sealed Denver’s 20-18 win in a game in which the Broncos walloped Brady 23 times, more than he’d ever been hit in his career.
“He was rattled,” said Broncos cornerback and former Brady teammate Aqib Talib. “I don’t think I’ve ever seen anybody put that much pressure on Tom — ever.” The first time Brady and Manning squared off in the AFC championship was Jan. 18, 2004, and Brady built a 15-0 lead on Manning’s Indianapolis Colts on the way to a 24-14 victory at home.
They met again three years later at the RCA Dome in Indianapolis and Brady again built a big lead, this time putting the Patriots up 21-3 early in the second quarter only to watch Manning engineer the biggest comeback in NFC title game history for a 38-34 Colts victory that sent him and coach Tony Dungy to their first Super Bowl.
Joseph Addai’s 3-yard run with 1 minute left gave the Colts their first lead in the game.
Manning couldn’t bear to watch Brady’s desperation drive, looking up from the sideline only after hearing the crowd at the RCA Dome go wild after Marlin Jackson’s interception.
“I said a little prayer on that last drive,” Manning said. “I don’t know if you’re supposed to pray for stuff like that, but I said a little prayer.”

Cincinnati Bengals coach Forrest Gregg called the Freezer Bowl — a 27-7 win over the San Diego Chargers on Jan. 2, 1982 — worse than the Ice Bowl on Dec. 31, 1967, when he was a Packers offensive lineman in the most famous cold-weather game in NFL history.
The Ice Bowl was colder — minus-13 degrees at kickoff with a wind chill of minus-48 — but the 35 mph wind gusts in Cincinnati 15 years later made minus-9 degrees feel like minus-59.
“The ball is frozen, the laces are razor-sharp — the passes are cutting the receivers’ hands, but they’re not bleeding because it’s so cold,” recalled Hank Bauer, then a Chargers special teams star and later a team broadcaster. “It was just too cold to play football.”
The Chargers were depleted after playing the NFL’s most-remembered warm-weather game only the week before, a 41-38 overtime win in Miami. Chargers tight end Kellen Winslow was helped off the field several times in the high-80s heat and humidity, yet caught 13 passes and blocked a field goal try.
“I’ve never felt so close to death before,” Winslow said.
A week later, Winslow caught the only touchdown pass thrown by Dan Fouts, who had icicles hanging from his beard a week after sweating it out in Florida.