The stage was set for Fresno State to hand the seventh-ranked San Diego State men’s basketball team its first loss of the season Tuesday.

Senior point guard Noah Blackwell returned from a long layoff caused by a knee injury. And senior forward Nate Grimes was back in the starting lineup after nursing a wrist injury.

But, once again, the Bulldogs challenged a more experienced opponent, only to end up on the losing end, 64-55, before a crowd of  6,773 at the Save Mart Center.

“I thought we played hard and we played pretty good defense. There were a few breakdowns, but when you’re playing a team of that caliber there are going to be some breakdowns. Sometimes they make you break down.” — Fresno State coach Justin Hutson

In a contest in which they had no 3-point game, the 18-0 Aztecs relied on a suffocating defense to deny the Bulldogs, who played three freshmen in the game.

“I was leaving the hotel (earlier) and saw Clemson beat Duke on the road,” Aztecs coach Brian Dutcher said. “I told these guys, ‘Everyone knows you’re ranked and they bring their best effort. Enjoy every one of them. What you’re doing is not easy. Winning on the road is the hardest thing in basketball. Your perfect record on the road is unheard of.”

San Diego State hasn’t been 18-0 since the 2013-14 team advanced to the Sweet 16. The Aztecs experienced just their fifth victory by single digits, due in part to an offense that missed 15 of 18 3-point attempts and had no offensive rebounds in the first 30 minutes.

“Both teams did a good job on defense,” said guard Malachi Flynn, who led all scorers with 20 points. “They did a really good job of making us make shots.” 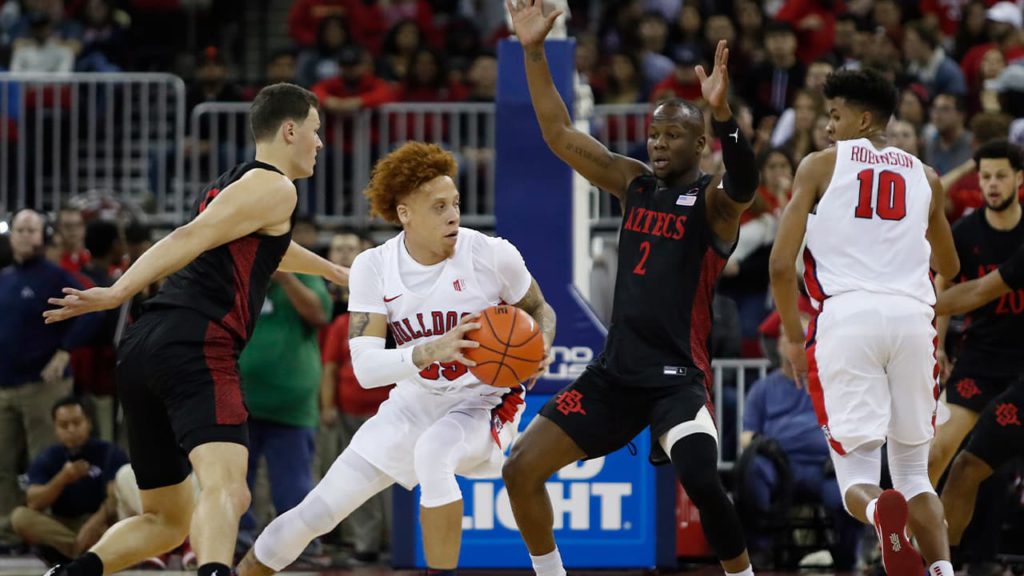 “I thought we played hard and we played pretty good defense. There were a few breakdowns, but when you’re playing a team of that caliber there are going to be some breakdowns,” said Fresno State coach Justin Hutson. “Sometimes they make you break down.”

Up Next: Bulldogs Play at Wyoming

The loss dropped the Bulldogs to 1-5 in conference play for the first time since 2013. They play at Wyoming, which is winless in the Mountain West, on Saturday

The crowd was the second-biggest of the season at the Save Mart Center, trailing only the “Paul George Day” attendance of 8,529 against Winthrop.

“We have a great fan base and they came out tonight and they supported us and we appreciate the Red Wave,” said senior guard New Williams, who scored 15 points.