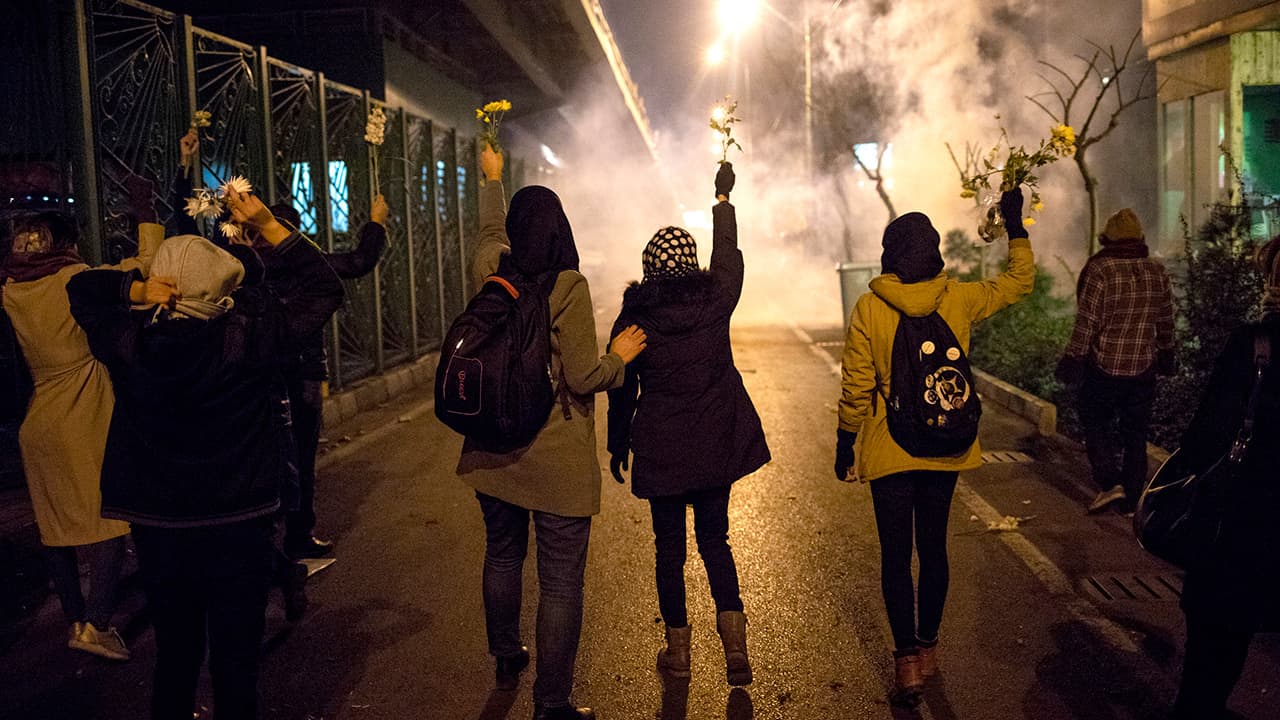 DUBAI, United Arab Emirates — Online videos appeared to show Iranian security forces firing live ammunition and tear gas to disperse protests as popular anger swelled Monday over the accidental shootdown of a Ukrainian jetliner and Iran’s failed attempt to conceal its role in the tragedy.
The unrest comes amid soaring tensions between Washington and Tehran that have raised fears of a war between the two countries after a U.S. airstrike killed Iranian Gen. Qassem Soleimani. Iran responded with a ballistic missile attack on two bases housing U.S. troops in Iraq, without hurting anyone. It accidentally shot down the plane hours later as it braced for a U.S. counterattack that never came.
Videos sent to the New York-based Center for Human Rights in Iran and later verified by The Associated Press show a crowd of demonstrators near Azadi, or Freedom, Square fleeing as a tear gas canister lands among them. People cough and sputter while trying to escape the fumes, with one woman calling out in Farsi: “They fired tear gas at people! Azadi Square! Death to the dictator!”
Another video shows a woman being carried away in the aftermath as a trail of blood can be seen on the ground. Those around her cry out that she has been shot in the leg.
“Oh my God, she’s bleeding nonstop!” one person shouts. Another shouts: “Bandage it!”
Photos and video after the incident show pools of blood on the sidewalk.

The Uniformed Police Were Just One of Several Security Forces Deployed In this photograph taken Sunday, Jan. 12, 2020, a riot police officer watches protesters demonstrating to remember victims of a Ukrainian airplane shot down by an Iranian missile in Tehran, Iran. On Monday, Jan. 13, 2020, online videos purported to show that Iranian security forces fired both live ammunition and tear gas to disperse demonstrators protesting against the Islamic Republic’s initial denial that it shot down a Ukrainian jetliner. (AP Photo)

Iranians Have Expressed Anger Over the Downing of the Plane

The Guard has been accused of opening fire on demonstrators during previous waves of protests, including after an increase in gasoline prices in November, when more than 300 people were reportedly killed in a crackdown.
Ebrahim Raisi, the head of Iran’s judiciary, issued a warning to protesters, saying “the agents of America and agents of foreign countries” want to use anger over the plane disaster to “compromise” Iran’s security. Iran often blames anti-government protests on foreign conspiracies.
The crash of the Ukraine International Airlines jet early Wednesday killed all 176 people on board, mostly Iranians and Iranian-Canadians. For three days, Iranian officials ruled out any strike on the plane, suggesting the crash of Flight 752 was caused by a technical failure. Only on Saturday did authorities acknowledge shooting it down, as evidence mounted and after Western leaders accused Iran of culpability.
Iranians have expressed anger over the downing of the plane and the misleading explanations from senior officials about it. They are also mourning the dead, which included many young people who were studying abroad.
The first protest erupted in Tehran at what was initially billed as a candlelight vigil. “They are lying that our enemy is America! Our enemy is right here!” students shouted.
Iranian authorities briefly arrested the British ambassador, who said he went to the vigil to pay his respects and left as soon as the chanting began.

Iran’s Foreign Ministry summoned the British ambassador on Sunday to protest what it said was his presence at an illegal event. Britain summoned Iran’s ambassador on Monday “to convey our strong objections” over the weekend arrest. In this photograph taken Saturday, Jan. 11, 2020, Iranian police officers take position while protesters gather in front of Amir Kabir University in Tehran, Iran, to remember victims of a Ukrainian airplane shot down by an Iranian missile. Online videos purported to show Monday, Jan. 13, 2020, that Iranian security forces fired both live ammunition and tear gas to disperse demonstrators protesting against the Islamic Republic’s initial denial that it shot down a Ukrainian jetliner. (AP Photo)

There’s also been grief and anger from Iran’s creative community.
Some artists, including famed director Masoud Kimiai, withdrew from an upcoming international film festival. Two state TV hosts resigned in protest over the false reporting about what happened to Flight 752.
Taraneh Alidoosti, one of Iran’s most famous actresses, posted a picture of a black square on Instagram with the caption: “We are not citizens. We are hostages. Millions of hostages.”
Saeed Maroof, the captain of Iran’s national volleyball team, also wrote on Instagram: “I wish I could be hopeful that this was the last scene of the show of deceit and lack of wisdom of these incompetents but I still know it is not.”
He said that despite the qualification of Iran’s national team for the 2020 Tokyo Olympics after years of effort, “there is no energy left in our sad and desperate souls to celebrate.”
Another video making the rounds showed the national symbol of Iran, four crescents and a sword, in the shape of a water lily flying through what appeared to be a 1980s-style video game like “Galaga.” Music chimes when it touches oil as it fires on symbols representing people, knowledge and ultimately an airplane.
“To be continued,” the caption at the end of the clip reads.

Ahead of Impeachment Trial, Trump Suggests Not Having It