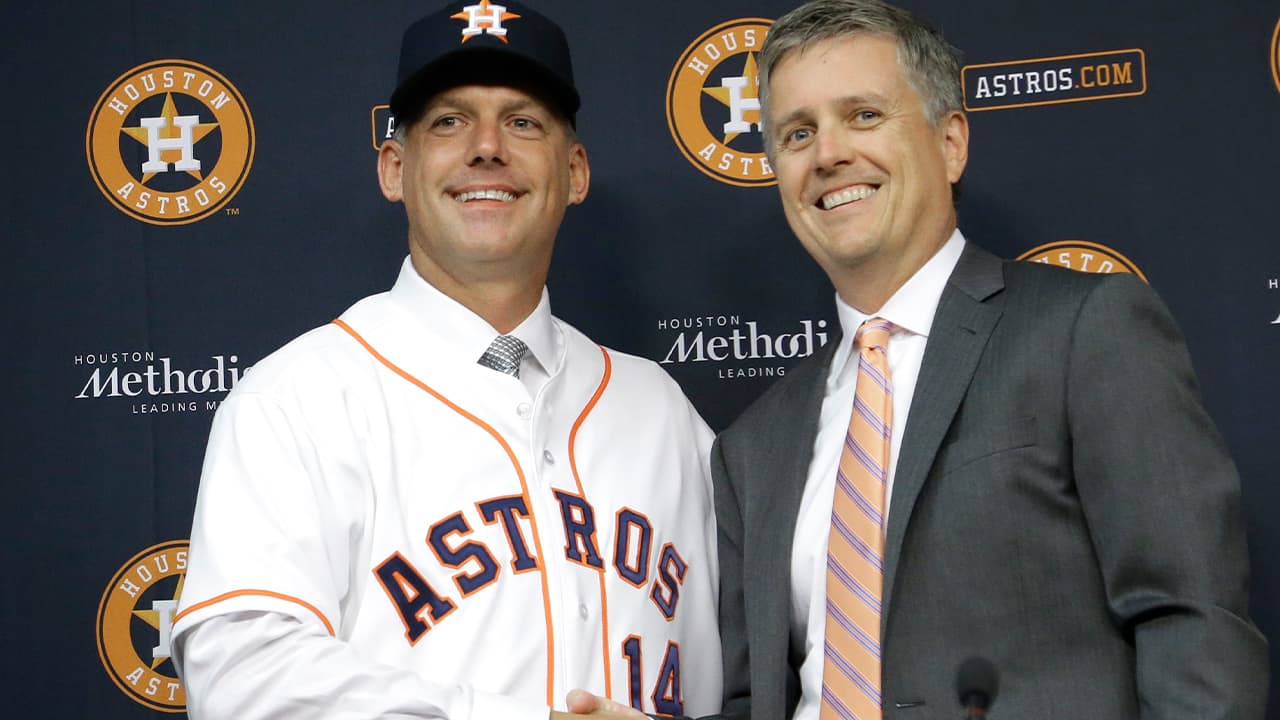 HOUSTON — Astros manager AJ Hinch and general manager Jeff Luhnow were fired Monday after the pair were suspended by Major League Baseball for the team’s use of electronics for sign-stealing during Houston’s run to the 2017 World Series title and again in the 2018 season.

In U.S. sports’ largest scandal since the New England Patriots’ “Spygate,” Commissioner Rob Manfred announced the discipline Monday and strongly hinted that current Boston manager Alex Cora — the Astros bench coach in 2017 — will face equal or more severe punishment. Manfred said Cora developed the sign-stealing system used by the Astros. The Red Sox are under investigation for sign-stealing in Cora’s first season as manager in 2018, when Boston won the World Series.
Houston was fined $5 million, the maximum allowed under the Major League Constitution. The Astros will forfeit their next two first- and second-round amateur draft picks.
The investigation found that the Astros used the video feed from the center-field camera to see and decode the opposing catcher’s signs. Players banged on a trash can to signal to batters what was coming. Knowing what pitch is coming improves a batter’s odds of getting a hit.
Sign-stealing is a legal and time-honored part of baseball as long as it is done with the naked eye — say, by a baserunner standing on second. Using technology is prohibited.

‘We Need to Move Forward With a Clean Slate’

Astros players disputed whether knowing the pitches seconds in advance helped batters. Houston had fewer wins at home than on the road, winning 94 home games and 110 on the road during the two seasons. There was no sign-stealing system on the road.

“It is very clear to me that the culture of the baseball operations department, manifesting itself in the way its employees are treated, its relations with other clubs, and its relations with the media and external stakeholders, has been very problematic,” Manfred wrote in a nine-page statement. “At least in my view, the baseball operations department’s insular culture — one that valued and rewarded results over other considerations, combined with a staff of individuals who often lacked direction or sufficient oversight, led … finally, to an environment that allowed the conduct described in this report to have occurred.”
Crane, who hired Luhnow weeks after buying the Astros, denied a widespread problem, saying “I think there was some isolated situations.”
Hinch and Luhnow did not respond to phone messages and texts from The Associated Press.
Baseball’s response was far greater than that of the NFL to a similar infraction. New England coach Bill Belichick was fined $500,000 in 2007 and the Patriots were fined $250,000 for using video to capture an opponent’s signals. In the scandal known as Spygate, the Patriots also were stripped of a first-round draft choice. They were penalized again for $1 million eight years later for deflating footballs used in the AFC championship game. The NFL took away a first-round draft pick and suspended quarterback Tom Brady for four games.
Manfred said Hinch was aware of the system but did not tell Luhnow.
“As the person with responsibility for managing his players and coaches, there simply is no justification for Hinch’s failure to act,” Manfred said. The GM told Major League Baseball he was unaware of the system, but Manfred held him accountable for the team’s actions.

Manfred Said the Banging System Was Not Used in 2018

Astros employees in the team’s video replay room started to decode signs using the center field camera at the start of the 2017 season. A player would act as a runner to bring the information to the dugout, where a runner on second would be signaled. The runner would decode the catcher’s sign and signal the batter. At times, an employee in the replay room would convey the information by text message to the watch or phone of a staff member in the dugout.
Cora began calling the replay room for the information early in the season. After a group of players that included Beltrán discussed how to improve the system about two months into the season, Cora arranged for a video monitor of the center field camera to be installed next to the dugout and players would communicate pitches by banging a bat or massage gun on a trash can. Two bangs usually were used for off-speed pitches and no sound for fastballs.
Manfred said the banging system was not used in 2018 but that signs were stolen by the replay room and communicated to the dugout during at least part of that season. There was no evidence signs were stolen during the 2018 playoffs.
The Mets and Beltrán declined to comment, spokesman Harold Kaufman said.
Also Monday, former Astros assistant GM Brandon Taubman was suspended through the World Series for his conduct during last year’s AL Championship Series, when his profane remarks directed at female reporters led to his firing by Houston, which at first denied the incident and later apologized.
Taubman can apply to Manfred for reinstatement after the World Series, and any future violations of Major League Rules would lead to a lifetime ban.