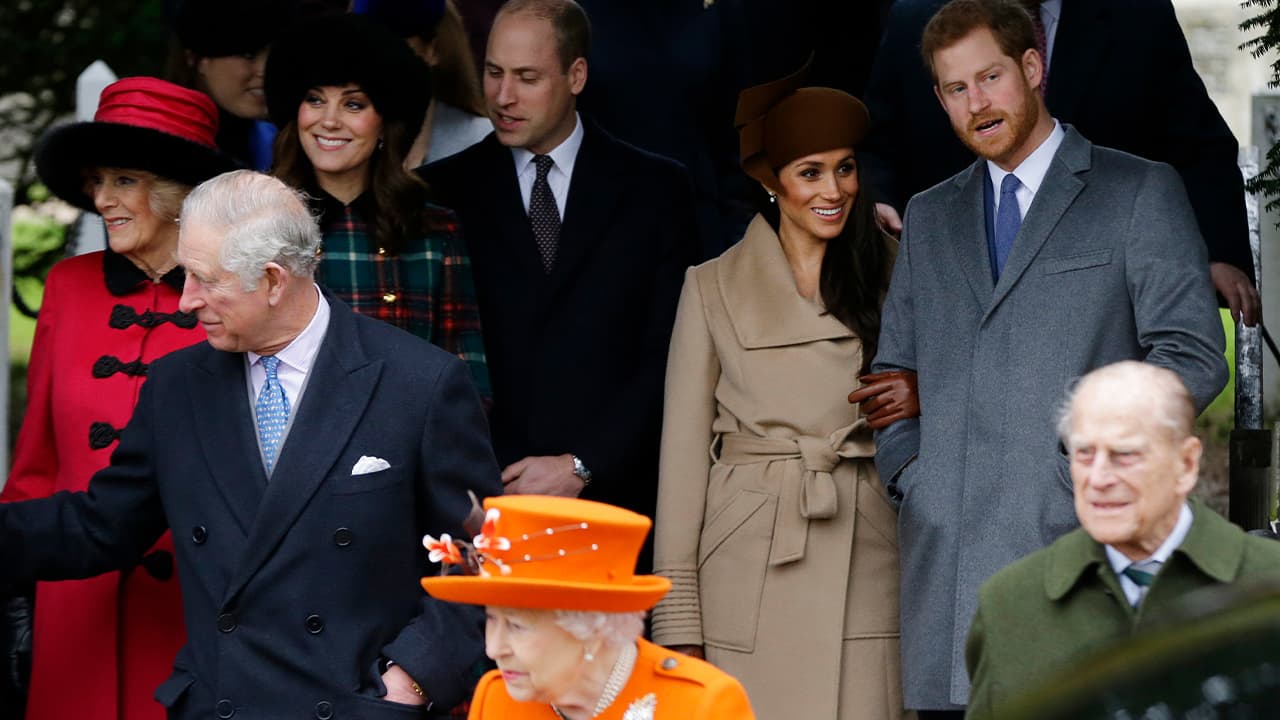 Britain’s royal family scrambled Thursday to contain the fallout from the surprise announcement by Prince Harry and Meghan that they plan “to step back” from royal duties, a shift that ignited media outrage and public unease in the U.K.

Before marrying the prince in a royal wedding watched around the world in 2018, the 38-year-old Duchess of Sussex was American actress Meghan Markle, star of the TV legal drama “Suits.” The couple’s first child, Archie, was born in May 2019. Britain’s Prince Harry and Meghan Markle walk away after posing for the media in the grounds of Kensington Palace in London. (AP/Alastair Grant, File)

The uproar began Wednesday with a statement from Buckingham Palace, described as “a personal message from the Duke and Duchess of Sussex.” It said Harry and Meghan intend to become financially independent and to “balance” their time between the U.K. and North America.
“After many months of reflection and internal discussions, we have chosen to make a transition this year in starting to carve out a progressive new role within this institution,” the statement said. “We intend to step back as ‘senior’ members of the royal family and work to become financially independent, while continuing to fully support her majesty the queen.”
Hours after Harry and Meghan’s announcement, though, a difference of opinion was laid bare. Buckingham Palace issued a second statement, saying many issues still had to be worked out before the couple’s plan could be realized and discussions with the couple “were at an early stage.”
That communique hinted that Harry and Meghan’s statement had caught the royal household by surprise.
“We understand their desire to take a different approach, but these are complicated issues that will take time to work through,” it read.
The message about their future plans was also posted on the couple’s official Instagram page and referred readers to their website for information. But the statement and launching of the website was apparently not cleared with senior royals or their advisers.

The Royal Pair Described Their New Roles on Their New Website

It was not known exactly where in North America the couple planned to spend some of their time. Meghan grew up in Los Angeles and lived in Toronto while filming “Suits.”
Harry and his family skipped the queen’s traditional Christmas gathering at her Sandringham estate last month to spend the holidays on Vancouver Island off the west coast of Canada and see Markle’s mother Doria, who lives in California.
The royal pair described their new roles on their new website. The site noted that the Sovereign Grant, which funds the monarchy, covers just 5% of the costs for the duke and duchess and is used for their official office expenses. They said they want to cut this financial tie.
The couple also announced a new media relations policy “to ensure diverse and open access to their work.” The policy includes them opting out of a pool system that guarantees media coverage of royal events to Britain’s media.
“Under this system, the rota, or pool, gives these British media representatives the opportunity to exclusively cover an event, on the understanding that they will share factual material obtained with other members of their sector who request it,” the website said. “The current system predates the dramatic transformation of news reporting in the digital age.”
As an actress and a human rights activist, the duchess was accustomed to media attention before her marriage, but she has made no secret of the fact that the transition to being a global celebrity and part of Britain’s royal family was difficult. The royal couple particularly took issue with their treatment at the hands of the British tabloids, whose aggressive coverage of all things royal is legendary.
The royal couple revealed their struggles with the media during an ITV documentary “Harry & Meghan: An African Journey,” which followed them on a recent tour of Southern Africa. Both said they had struggled with the spotlight, particularly because they say much of what is printed is untrue. FILE – In this Tuesday, June 26, 2018 file photo Britain’s Queen Elizabeth, Prince Harry and Meghan, Duchess of Sussex pose for a group photo at the Queen’s Young Leaders Awards Ceremony at Buckingham Palace in London. In a stunning declaration, Britain’s Prince Harry and his wife, Meghan, said they are planning “to step back” as senior members of the royal family and “work to become financially independent.” A statement issued by the couple Wednesday, Jan. 8, 2020 also said they intend to “balance” their time between the U.K. and North America. (John Stillwell/Pool Photo via AP, File)

The Announcement Left a Slew of Questions in Its Wake

The duchess told ITV last year that her British friends warned her not to marry the prince because of the intense media scrutiny that would follow in his country. But the U.S. television star said she “naively” dismissed the warnings, because as an American she didn’t understand how the British press worked.
“I never thought this would be easy, but I thought it would be fair,” she said. “And that is the part that is hard to reconcile.”
The announcement left a slew of questions in its wake, including whether the couple should repay taxpayer funds used on their home, Frogmore Cottage in Windsor. Taxpayers paid 2.4 million pounds to renovate the Grade-2 listed building.
Simon Webb, 73, of King’s Lynn in eastern England, said the couple should pay the money back if they are stepping back from royal duties.
“I don’t think they can keep dipping in and out as it suits them, because that’s what they seem to do,” he said.
The royal family will also be watching to see how the public reacts to the news. Many royal watchers on Thursday offered sympathy for the queen.
“We don’t mind them having an ordinary life. What we don’t like is the queen not being informed about nothing,” said royal fan John Loughrey, adding that the British public did not want to see the royal couple “isolated” abroad.
“It is a crisis,” he said. “We have got a crisis here. Seriously.”