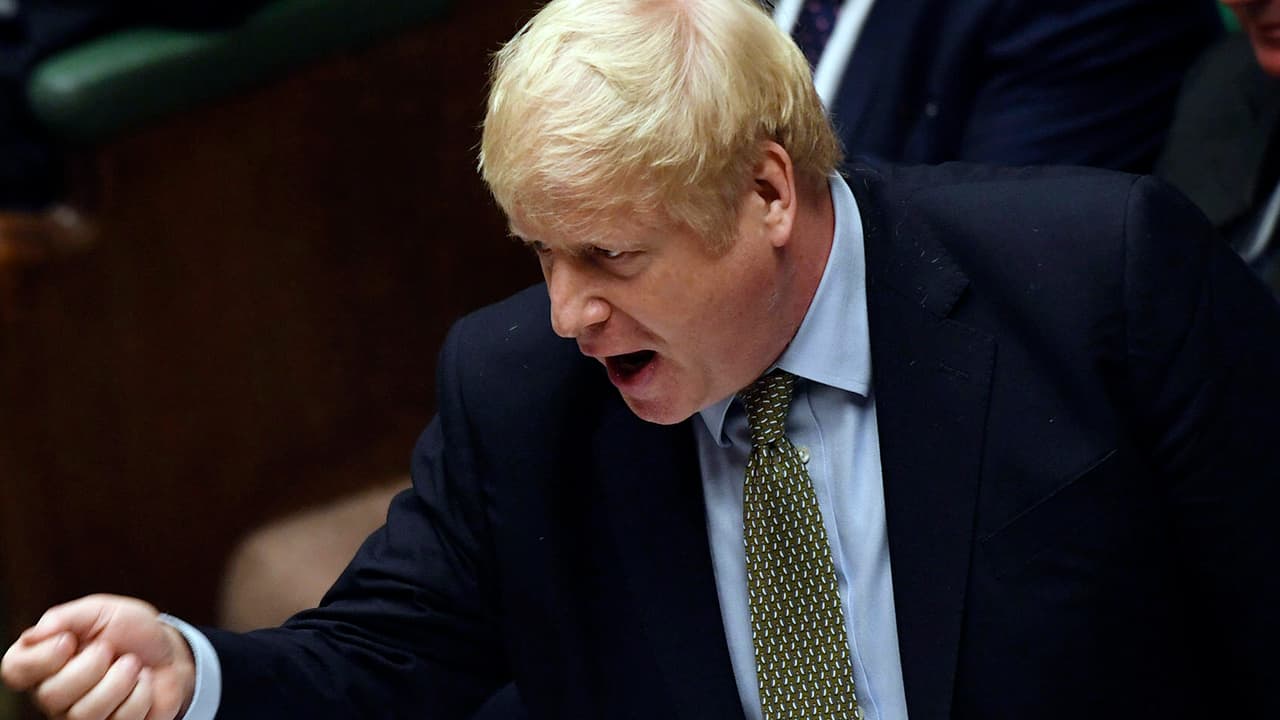 LONDON — Britain passed a long-elusive milestone on the road to Brexit on Thursday when the House of Commons approved a bill authorizing the country’s departure from the European Union at the end of the month. Remain in the European Union, anti-Brexit protesters, including Steve Bray, at right, demonstrate outside the Houses of Parliament in London, on the day of Prime Minister’s Questions taking place inside, Wednesday, Jan. 8, 2020. In a London speech on Wednesday, the president of the European Commission Ursula von der Leyen warned Britain that it won’t get the “highest quality access” to the European Union’s market after Brexit unless it makes major concessions. (AP Photo/Matt Dunham)

“This is a constitutional crisis, because we will not and we cannot accept what is being done to us,” Blackford said.
Despite Johnson’s repeated promise to “get Brexit done” on Jan. 31, the departure will only mark the start of the first stage of the country’s EU exit. Britain and the EU will then launch into negotiations on their future relationship, racing to strike new relationships for trade, security and a host of other areas by the end of 2020.
“Leaving the EU doesn’t mean that we will have got Brexit done,” said Paul Blomfield, a Brexit spokesman for the main opposition Labour Party. “We’ll have completed the first step, departure, but the difficult stage is yet to come.”
Top officials in the bloc are already saying that sealing a new deal will be tough.
Michel Barnier, the EU’s chief Brexit negotiator, said Thursday that Britain’s goal of striking a full free trade agreement by the end-of-year deadline that Johnson insists on was unrealistic.
“We cannot expect to agree on every aspect of this new partnership,” Barnier said, adding “we are ready to do our best in the 11 months.”
International trade agreements typically take years to complete, but Johnson has ruled out extending a post-Brexit transition period agreed by the two sides beyond the end of 2020, although the EU has offered to prolong it until 2022. That has set off alarm bells among U.K. businesses, which fear Britain could face a “no-deal” Brexit at the start of 2021. Economists say that would disrupt trade with the EU — Britain’s biggest trading partner — and plunge the U.K. into recession.
Britain and the EU will have to strike deals on everything from trade in goods and services to fishing, aviation, medicines and security. The EU insists there is no way to deal with all these issues in less than a year. British officials have suggested they could carve the negotiations up into chunks, sealing deals one sector at a time. European Commission’s Head of Task Force for Relations with the United Kingdom Michael Barnier listens as European Commission President Ursula Von der Leyen delivers a speech at the London School of Economics in London, Wednesday, Jan. 8, 2020. The European Commission’s president warned Britain on Wednesday that it won’t get the “highest quality access” to the European Union’s market after Brexit unless it makes major compromises. (AP Photo/Frank Augstein)

The two sides also have conflicting demands that are likely to complicate negotiations.
Johnson says the U.K. is seeking a wide-ranging free trade deal with the bloc, but doesn’t want to agree to keep all EU rules and standards. It wants to be free to diverge in order to strike new trade deals around the world.