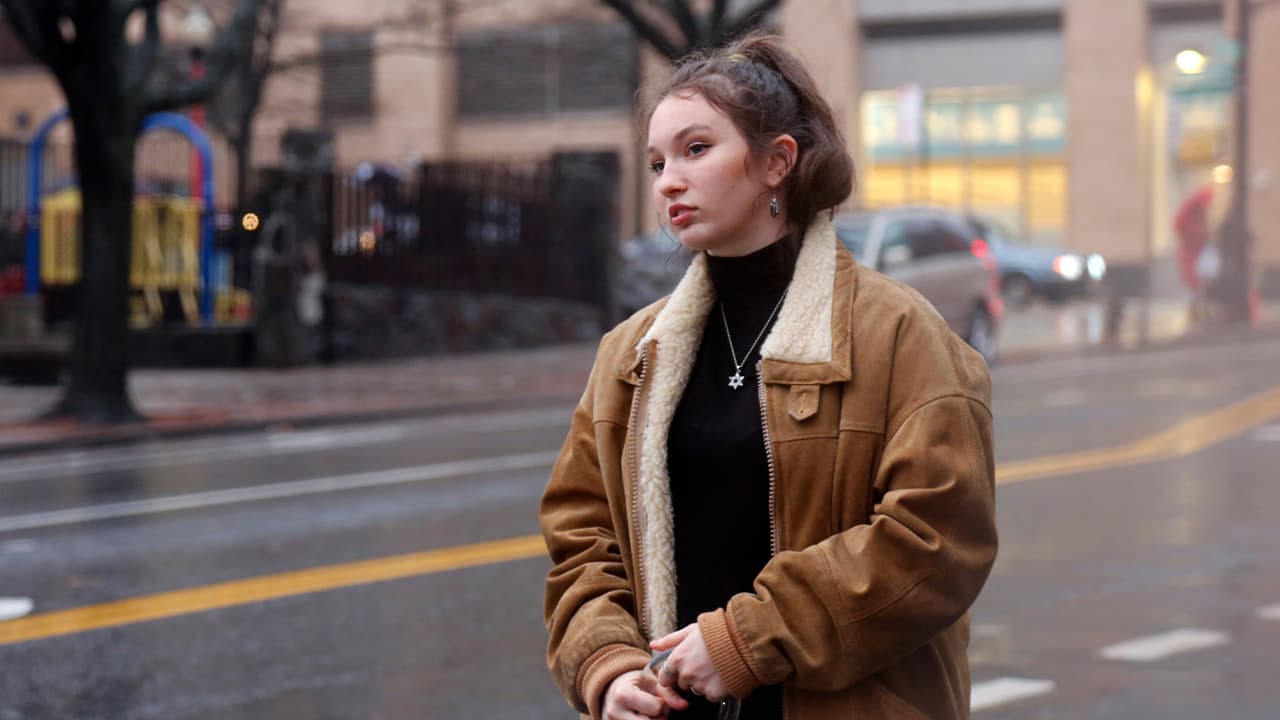 NEW YORK — When a man spewed anti-Semitic slurs and spat on her face, Shoshana Blum remembered her ancestors who survived the Holocaust, and instead of looking down – she defiantly stared at him eye to eye. In this Friday, Jan. 3, 2020, photo, Chana Blum, 14, recites a blessing after lighting candles for Shabbat dinner in her family’s home in New York. Two days later, Blum joined her older sister at the “No Hate, No Fear” solidarity march organized by New York’s Jewish community in response to the recent string in anti-Semitic attacks. (AP Photo/Jessie Wardarski)

Anti-Semitic Attacks Rose Worldwide by 13% in 2018

“This is all changing now. After Pittsburgh, after Poway, after Halle (Germany), after Jersey City, after Monsey we no longer keep the door unlock(ed),” he recently said on Facebook.
Visitors now must buzz in and Leener installed a security camera for the front door.
“I’m angry that this is our new reality. I hate that anti-Semitism is changing how I practice and share my Judaism to the world,” he said.
Anti-Semitic attacks rose worldwide by 13% in 2018 compared to the previous year, according to a report by Tel Aviv University’s Kantor Center for the Study of Contemporary Jewry. The report recorded nearly 400 cases worldwide, with more than a quarter of the major violent cases taking place in the U.S.
The surge of violent attacks on the Jewish community, most recently in Monsey, New York, have caused consternation nationwide.
“After the stabbing in Monsey, I told my mom, ‘This is crazy. He was arrested less than a mile from here, while we were at Shul (synagogue) and celebrating Hanukkah,’ ” said Blum, who was raised in Chabad-Lubavitch, an Orthodox Jewish Hasidic movement.
The first time that Blum witnessed hate against Jews she was seven. The victim was her father, Rabbi Yonah Blum, who was the head of Columbia University’s Chabad House for 23 years. As they walked from synagogue near the campus, a man came up behind him yelling anti-Semitic slurs and slapped his black fedora and his skullcap off his head.

“We’re very separated people when it comes to different topics … but something that has been coming up since the (Monsey) attack, is that we all stand together,” she said on a recent Friday as she prepared for the start of the Jewish Sabbath. In this Dec. 30, 2019, photo, Gavriel Menachem Blum, 10, plays a video game before Shabbat dinner at his family’s home in New York. Like many Jews who observe Sabbath, Blum refrains from playing video games and using other electronics after sundown. (AP Photo/Jessie Wardarski)

The Anti-Defamation League Has Worked on Initiatives

Cohen said that her connection to Judaism grew stronger after someone put an anti-Semitic message on the door of her dorm at Johns Hopkins University, and later when she traveled to Israel. She said she is combating the negative environment by exposing the positive side of Jewish life.
The Anti-Defamation League has worked on initiatives, including its “No Place for Hate” anti-bias, anti-bullying initiative, which is in place in schools. Another includes working with juvenile offenders who are involved in some of the incidents.
Reformed neo-Nazi Shannon Foley Martinez helps people quit hate organizations. She feels she must spread the message that people can change their lives. She hopes her story is a warning to parents.
“People have preconceived notions of who they think violent white supremacists are,” said Martinez, who at 15 became a skinhead who spouted white supremacist rhetoric, gave stiff-armed Nazi salutes and tagged walls with swastikas.
“I grew up in a family with two middle-class parents who have been married for 51 years, I was one of the smartest kids in my class, I was a championship athlete at one point of my life. I don’t fit what people’s ideas are of who is vulnerable to radicalize into these ideas,” she said.
“My story is important because of that. We have to look at ourselves and our children and think: ‘This could be my child. Am I actively and intentionally taking steps to not find resonance and find resistance to hate?’”

Prince Harry and Meghan to 'Step Back' as Senior UK Royals