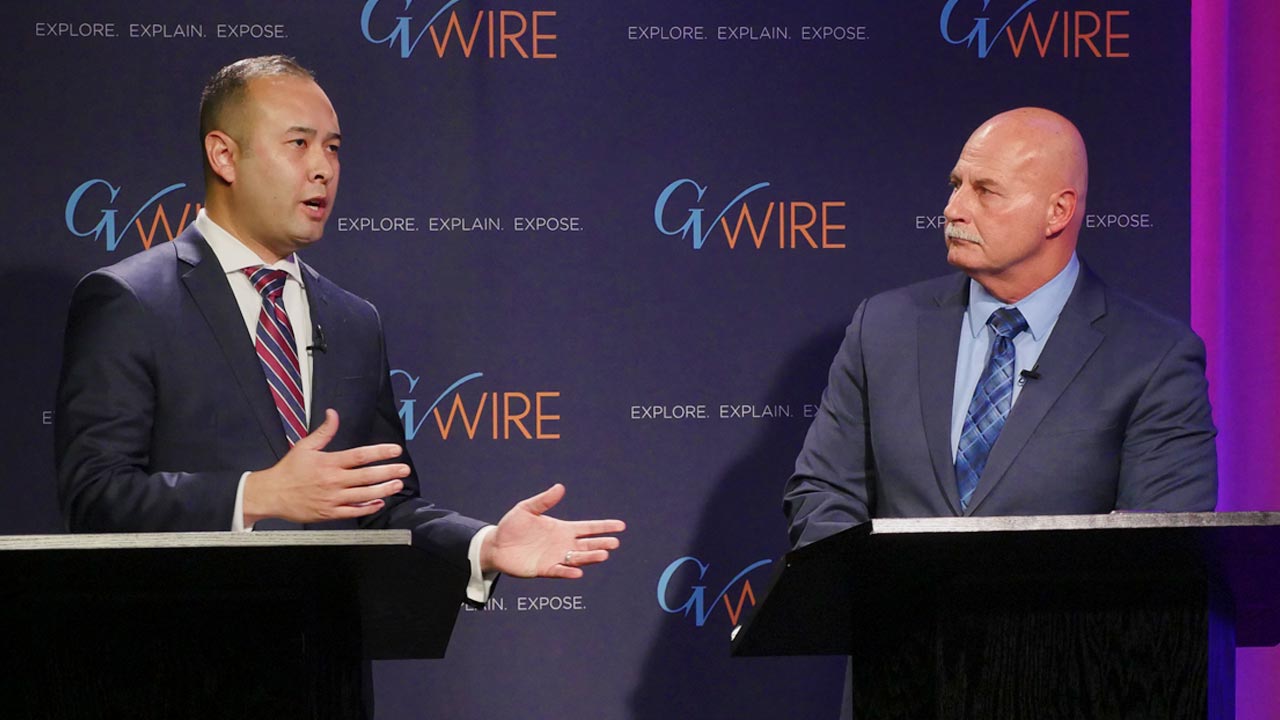 Fresno’s leading candidates for mayor hammered on their campaign themes — and sometimes on each other — at a televised forum Tuesday evening that covered a variety of topics, including homelessness, marijuana dispensaries, and facing up to mistakes. 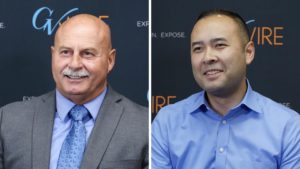 Jerry Dyer emphasized his long experience as the city’s police chief, overseeing multimillion-dollar budgets and thousands of employees, as a key reason why he should be elected.
Andrew Janz, a Fresno County deputy district attorney, said he will offer a fresh perspective and will not be beholden to the special interests — developers — who he says have long called the shots at City Hall.
(You can watch a replay of the forum at this link.)

After asking Dyer and Janz about their qualifications to head California’s fifth-largest city, McEwen asked them how they would solve Fresno’s homelessness crisis. 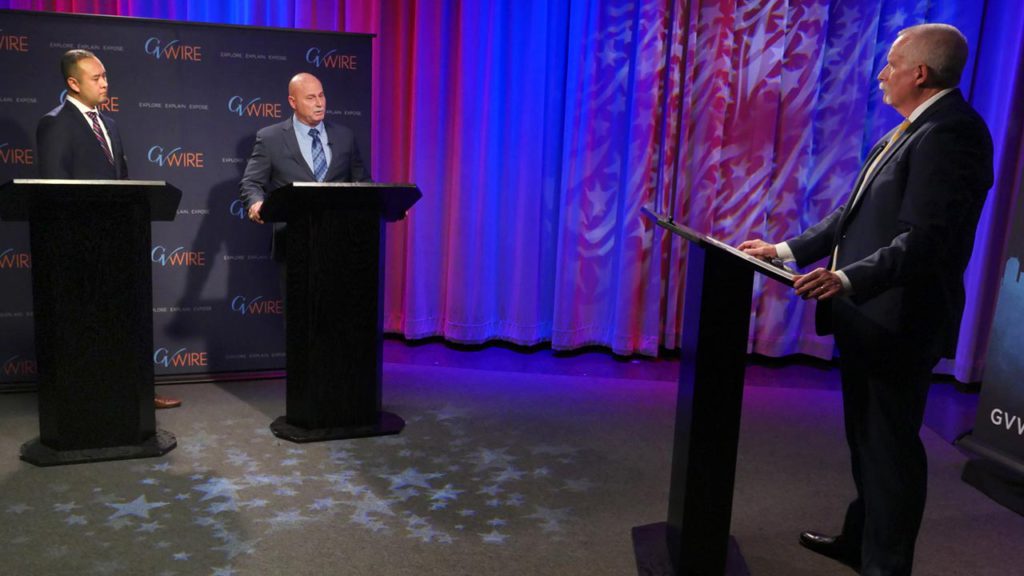 Dyer and Janz agreed that it’s the city’s top problem and the issue they hear about most from residents.
Dyer said there have been good efforts to address the problem, but they have been clearly insufficient as the city’s homeless population continues to grow, expanding by 17% just in the past year.
He said the city will need to work closely with the Fresno County Board of Supervisors, who control the county’s social services budget — Dyer noted that he has been endorsed by all five supervisors — to attack the problem in new ways.

Government Needs to Step Up

Janz said government needs to take a bigger role in addressing the problem, which he said up to now has been shouldered primarily by the private sector and nonprofits with limited resources.
Gov. Gavin Newsom on Wednesday proposed budgeting millions of dollars to help low-income people pay their rent, and for cities to pay for temporary housing units.

When Sacramento offers to help with affordable housing, Fresno needs to accept that help, Janz said.

When Will Fresno OK Recreational Pot?

Dyer said that while he remains personally opposed to recreational marijuana use, it is legal in California and so the city must make good decisions about the best way to authorize both medical and recreational marijuana sales outlets. He said he doubts that the tax revenues that the city might gain would be as much as some have forecast. The high taxes imposed by the state, plus any city taxes, will turn some buyers to the black market. 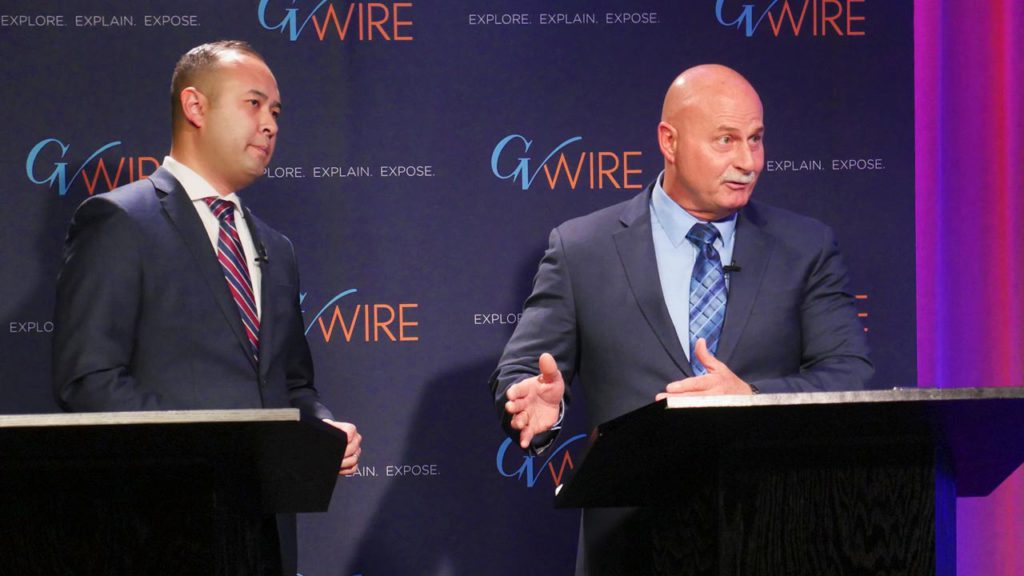 Even so, he said, dispensaries in Fresno are inevitable, and city officials must make sure that the dispensaries have sufficient security to keep neighborhoods safe.
It was somewhat of a turnaround from Dyer’s comments in a recent radio interview, when he called legalized marijuana a “no-win” for the city.
Janz noted that he and Dyer now appear to be on the same page about recreational marijuana, which Janz maintains could pump at least $500,000 yearly in additional tax revenues into the city’s treasury.
And cannabis dispensaries will also provide an opportunity to support some of the same communities that were most adversely impacted by the ill-fated war on marijuana, which sent many people to prison, he said.
“I think we’re beginning to see, not only in our community but nationwide, an important cultural shift in terms of the war on drugs,” Janz said. “We know that what’s happened with this war on marijuana hasn’t worked, and is really bad for a lot of people who have been incarcerated for simple possession.”

McEwen asked Janz if he regrets his association during his 2018 congressional campaign with attorney Michael Avenatti, who has been accused of trying to extort $25 million from Nike by threatening to make public claims that the athletic clothing company improperly paid athletes. Janz ran against incumbent Rep. Devin Nunes in the 22nd Congressional district.
Janz said that candidates can’t control who supports their campaign, and he pointed out that Avenatti did not work for him or donate money to his campaign.
But then he turned his response into an attack on Dyer.
“I’m willing to go out there and say I made a mistake,” Janz said. “In hindsight, it was a bad decision. But I’m sure I don’t regret it as much as Jerry hiring Keith Foster to be his second-in-command … .
“I think that if we’re going to have a debate on who’s supporting who, I think the more important question about leadership is … the people you surround yourself with.”
Foster was convicted in 2017 on federal drug charges and sentenced to four years in prison.

“I’ve made my share of mistakes, but I’ve learned from them, and I’ve tried to be the leader that people expect of me as the police chief, and I’ll be the same as the mayor.” — Jerry Dyer
McEwen then asked Dyer about how he’s answering voters who raise questions about the mistakes he’s admitted to making early on in his career as a police officer — an issue often cited by his opponents. One of those opponents, Elizabeth Arambula, wife of Assemblymember Joaquin Arambula, sat in the CMAC studio next to Janz’s wife during the forum.

The Arambula family has contributed nearly $100,000 to an independent expenditure campaign opposing Dyer’s candidacy for mayor, in part because Dyer talked openly about the child abuse allegations that Joaquin Arambula faced in 2018. Arambula was later acquitted.
Dyer said he has acknowledged his mistakes, although he is honoring his wife’s request not to go into details.
“No. 1, those indiscretions on my part occurred when I was in my 20s,” Dyer said. “There are decisions that I made that I’m not proud of. I’m ashamed of many of them. Again, they were made when I was in my 20s.”
Dyer said he hopes voters will base their decision on whether to support him on his 18 years as the city’s police chief and not on mistakes he made early in his career. “I’ve made my share of mistakes, but I’ve learned from them, and I’ve tried to be the leader that people expect of me as the police chief, and I’ll be the same as the mayor.”
Related Topics:Andrew JanzDevin NuneshomelessnessJerry DyerKeith Fosterlegalized marijuanaMichael AvenattiPresident Donald Trumprecreational marijuana
Up Next