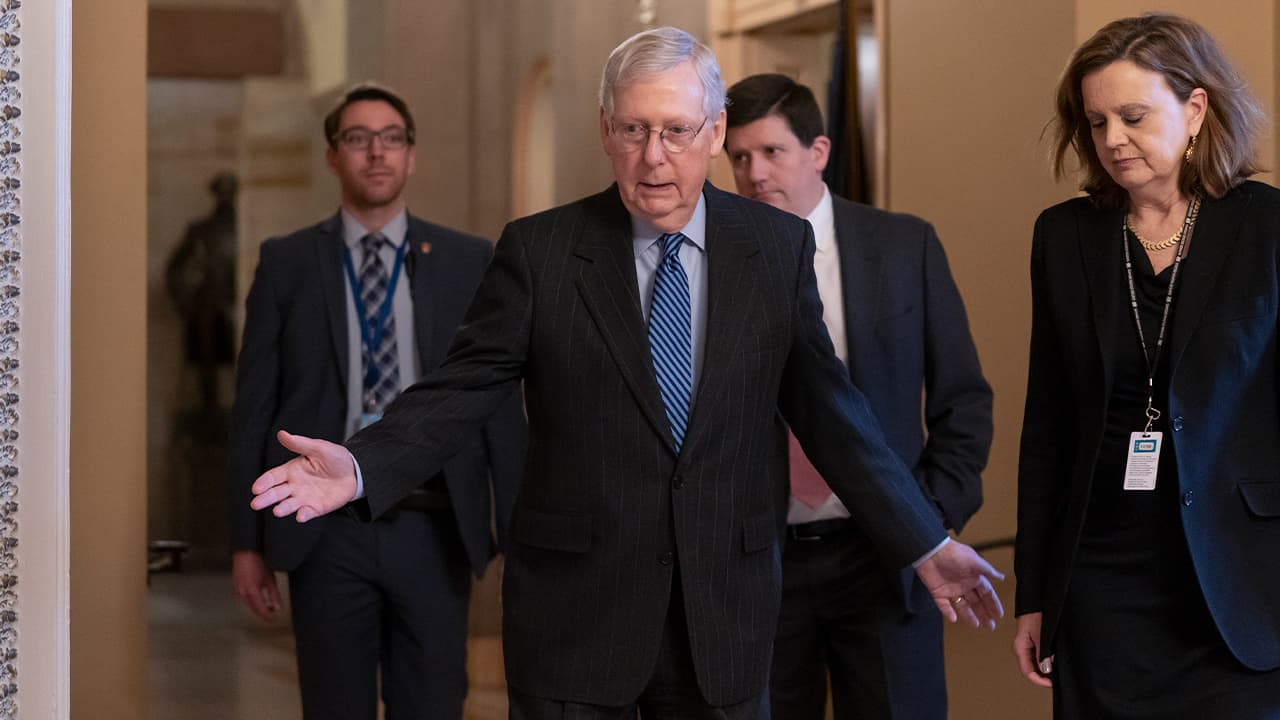 WASHINGTON — Senate Majority Leader Mitch McConnell said Tuesday he has secured the Republican votes needed to start President Donald Trump’s impeachment trial and postpone a decision on witnesses or documents that Democrats want.
McConnell is expected to launch the trial as soon as House Speaker Nancy Pelosi sends the articles of impeachment to the Senate. She is set to meet late Tuesday with her leadership team.
“We have the votes,” McConnell told reporters. He said the question of new witnesses will be addressed later “and not before the trial begins.”

The GOP leader told senators at their closed-door lunch Tuesday has support for his plan, which is modeled after Bill Clinton’s impeachment trial 20 years ago. It would start the trial first and postpone votes on witnesses until later in the process.
“He has 51, for sure,”‘ said Sen. Lindsey Graham, R-S.C., a top ally of the president, exiting the meeting.
Democrats are ramping up pressure on Republicans to insist on hearing from former national security adviser John Bolton and other witnesses, and not to go along with McConnell’s proposal to put off voting on new testimony until later. Senate Minority Leader Chuck Schumer calls it a “trap.”
“The Republican leader seems more concerned with being able to claim he went through the constitutional motions than actually carrying out our constitutional duty,” Schumer said Tuesday. He called it an “Alice in Wonderland logic.” Speaker of the House Nancy Pelosi, D-Calif., arrives at the Capitol in Washington on Tuesday as Democrats prepared largely symbolic resolutions under the War Powers Act to limit the president’s military actions regarding Iran. (AP Photo/J. Scott Applewhite)

McConnell Appears to Have Needed Votes

Just four GOP senators would be needed to deny McConnell his majority, but he appears to have locked up the votes. GOP leaders were conducting a whip count Tuesday to gauge support. Several GOP senators have indicated they want to hear from Bolton and other witnesses, but they are nevertheless standing with McConnell’s plan for starting the trial.
Sen. Mitt Romney, R-Utah, said Tuesday the Clinton process “provided a pathway” to start the trial and consider witnesses “down the road.” He said he supports it.
“I’m comfortable with that process,” Romney said. “And at this stage, I’d like to hear from John Bolton and other witnesses with the right information, but that process will accommodate that.”
Sen. Susan Collins, R-Maine, has also said she supports McConnell’s approach. Others say they are not sure they even need to hear from Bolton or other witnesses.
“It’s not that I don’t want to hear from him,”said Sen. Thom Tillis, R-N.C. “I want to hear from him when the House is willing to do their work and have the same agreement with the ambassador on their side of the Hill.”
Trump faces charges that he abused the power of the presidency by pressuring Ukraine’s new leader to investigate Democrats, using as leverage $400 million in military assistance that is critical for the ally as it counters Russia at its border.
The funding for Ukraine was eventually released but only after Congress intervened.