WASHINGTON — President Donald Trump closed out the old year by reprising a selection of his most familiar falsehoods and putting a few of his predecessor’s accomplishments in his own win column.

His vice president, seeking to justify the U.S. military’s targeted killing of a top Iranian general, helped begin the new year with a baseless claim tying that general to the 9/11 attacks.

A look at some of the Trump administration’s rhetoric on the tumultuous events in Iraq, impeachment, the economy and more:

VICE PRESIDENT MIKE PENCE, listing some of the “worst atrocities” of Iranian Gen. Qassem Soleimani: Trump “took decisive action and stood up against the leading state sponsor of terror to take out an evil man who was responsible for killing thousands of Americans. … (Soleimani) assisted in the clandestine travel to Afghanistan of 10 of the 12 terrorists who carried out the September 11 terrorist attacks in the United States.” — tweets Friday.

“[Trump] took decisive action and stood up against the leading state sponsor of terror to take out an evil man who was responsible for killing thousands of Americans. … (Soleimani) assisted in the clandestine travel to Afghanistan of 10 of the 12 terrorists who carried out the September 11 terrorist attacks in the United States.” — Vice President Mike Pence

THE FACTS: Pence misleadingly ties Soleimani to the Sept. 11, 2001, attacks on New York City’s World Trade Center. There is no evidence that Iran directly supported the 9/11 hijackers, many of them Saudi members of the al-Qaida terrorist group, nor are there any known reports that Soleimani was involved in assisting with their travel to Afghanistan.

First of all, there were 19 hijackers on 9/11, not 12. Pence spokeswoman Katie Waldman later clarified in a tweet that Pence was referring to those hijackers who traveled to Afghanistan through Iran before the attacks.

It’s true that Iran allowed al-Qaida operatives to pass through its borders from Saudi Arabia to Afghanistan without receiving stamps in their passports or with visas obtained at its consulate in Karachi, Pakistan, according to a 19-page, unsigned report found among Osama bin Laden’s personnel effects in the Abbottabad, Pakistan, raid. Fifteen of the hijackers were from Saudi Arabia, two from the United Arab Emirates, one from Egypt, and one from Lebanon.

That is consistent with the 9/11 Commission’s report, which found that some of the Sept. 11 hijackers — possibly eight — passed through Iran.

However, nowhere does the commission’s report mention Soleimani, let alone indicate he was behind the lax travel practices that allowed al-Qaida operatives through. The commission, in particular, “found no evidence that Iran or Hezbollah was aware of the planning for what later became the 9/11 attack” or that even the future hijackers themselves knew about their operation when traveling through Iran.

That makes it a stretch to imply Soleimani knew about plans for the 9/11 attacks and then worked to facilitate them.

After the attacks, al-Qaida members including Osama bin Laden’s son Hamza fled into Iran, but they were ultimately rounded up by the Iranian government and imprisoned.

TRUMP: “We had the best economic year, I think, in our country’s history.” — remarks to reporters Tuesday.

WHITE HOUSE: “President Trump’s pro-growth policies have led to an economic boom that is lifting up Americans of all backgrounds.” — news release Tuesday promoting his first three years in office.

THE FACTS: These are exaggerated boasts. The economy is not the best ever. It has also failed to grow to the extent Trump promised.

Related Story: What a US-Iran War Could Mean for the Economy

While the United States has enjoyed more than a decade of expansion that has created positive momentum during the Trump era, growth has not eclipsed the 3% repeatedly promised by the president and members of his administration. The national economy is healthy, but it has not been as robust as what Trump said he would produce.

In the late 1990s, growth topped 4% for four straight years, a level it has not reached on an annual basis under Trump. Growth reached 7.2% in 1984. The economy grew 2.9% in 2018 — the same pace it reached in 2015 under President Barack Obama — and hasn’t hit historically high growth rates.

Trump criticized Obama during the 2016 campaign for failing to deliver growth above 3%, only to fall short himself, despite White House estimates that the 2017 tax cuts would achieve lasting growth at roughly that level.

Annual growth instead averaged about 2.4% for the first nine months of last year. That’s down from 2.9% in 2018. Many of the figures cited by the White House reflect the continuation of a recovery that began before Trump became president, instead of Trump administration policies. 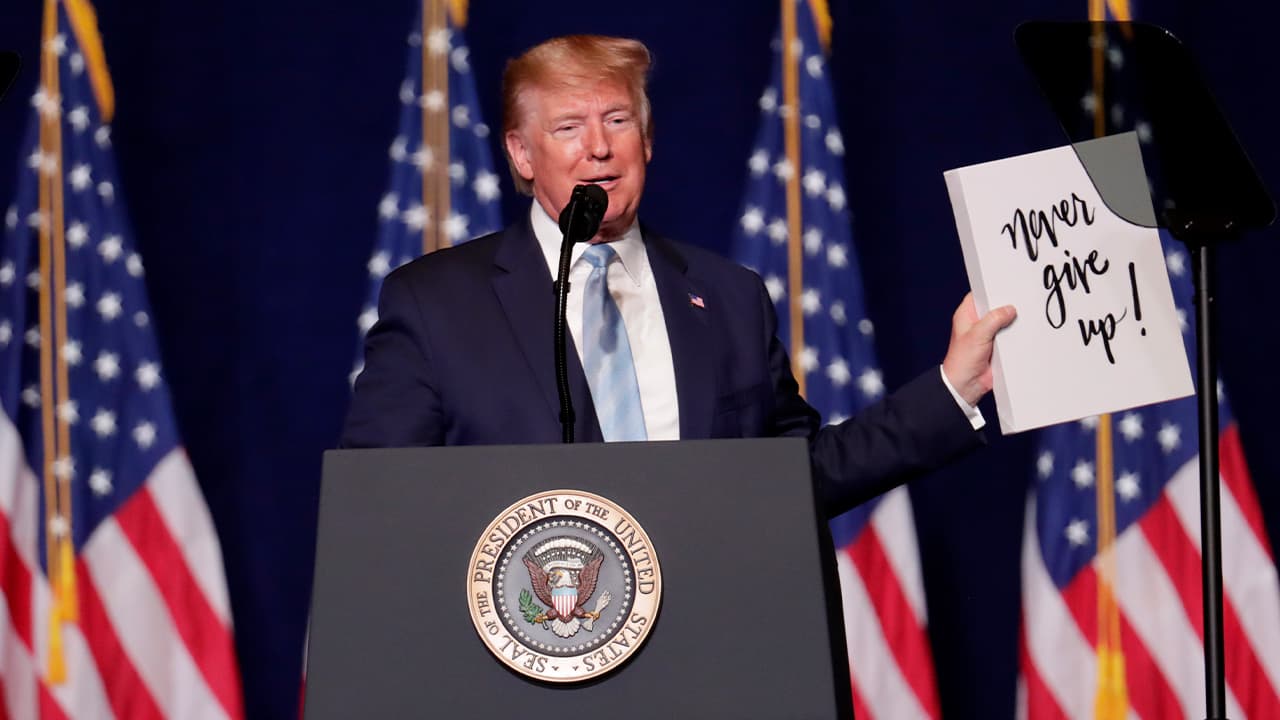 President Donald Trump holds up a sign given to him by a supporter during a rally for evangelical supporters at the King Jesus International Ministry, Friday, Jan. 3, 2020, in Miami. (AP Photo/Lynne Sladky)

TRUMP: “One of my greatest honors was to have gotten CHOICE approved for our great Veterans. Others have tried for decades, and failed!” — tweet Tuesday.

THE FACTS: This was one of Trump’s most frequent fabrications of 2019.

It was Obama who won passage of the Veterans Choice program, which gives veterans the option to see private doctors outside the Department of Veterans Affairs’ medical system at government expense. Congress approved the program in 2014, and Obama signed it into law. Trump expanded it.

THE FACTS: That’s not a complete portrait of his record. The new law has failed in its core mission of protecting whistleblowers who reported potential harm to veterans, according to a government watchdog.

A report released in October by the VA inspector general found that the accountability office established under the 2017 law did not consistently conduct sound and unbiased investigations and may not have protected identities of whistleblowers reporting wrongdoing.

It said the office had “significant deficiencies,” such as poor leadership, shoddy training of investigators and a failure to push out underperforming senior leaders.

Just one senior manager out of the 8,000 employees fired by VA had been removed by an office created to help keep senior-level managers accountable, according to the findings by the inspector general, Michael Missal.

The VA acknowledged many of the findings and said it was working to make changes.

TRUMP: “… An investigation that was illegally started … The Witch Hunt is sputtering badly, but still going on (Ukraine Hoax!). If this … had happened to a Presidential candidate, or President, who was a Democrat, everybody involved would long ago be in jail for treason (and more), and it would be considered the CRIME OF THE CENTURY.” — tweets Thursday.

“… An investigation that was illegally started … The Witch Hunt is sputtering badly, but still going on (Ukraine Hoax!). If this … had happened to a Presidential candidate, or President, who was a Democrat, everybody involved would long ago be in jail for treason (and more), and it would be considered the CRIME OF THE CENTURY.” — President Donald Trump

THE FACTS: Trump, as is typical, is loose in accusing his political rivals of treason and in placing his predicament in the league of mass murders, terrorism and other grotesque events meriting consideration as crimes of a century. Aside from that hyperventilation, though, what to make of his claim that he was investigated illegally?

The Justice Department inspector general’s report that Trump and his allies cite in his defense found “serious performance failures” up the chain of command in the conduct of the bureau’s investigation into ties between Russia and the Trump campaign. It harshly criticized the FBI for how it went about eavesdropping on a former campaign aide and cited a host of other problems, The bureau says it is taking dozens of steps to fix some of its most fundamental operations as a result.

Yet the report found the FBI was justified in opening its investigation and it did not find evidence that the bureau had acted with political bias, a conclusion at odds with Trump’s insistence that he’s the victim of a witch hunt.

Similarly, there is no illegal takeover afoot in the impeachment matter. Democrats are following a process laid out in the Constitution, which gives the House the sole power to impeach a president, which it did. The Senate conducts the impeachment trial.

TRUMP, on the House’s vote last month to impeach him: “What the Democrats did in the House was a disgrace. What they did — how unfair it was. We didn’t get lawyers. We didn’t have witnesses.” — remarks Tuesday to reporters.

THE FACTS: This is a distortion. In the House proceedings, Democrats on the House Judiciary Committee that drafted the articles of impeachment invited Trump and his lawyers to take part and ask for witnesses. The witnesses who did come forward were questioned by Republicans on the committee as well as by Democrats.

Earlier hearings by the House Intelligence Committee did not invite Trump or his team. Those hearings were like the investigative phase of criminal cases, conducted without the participation of the person under investigation. But lawmakers from both parties questioned the witnesses; several were invited at the request of Republicans on the committee. Trump complained about being shut out of that but when the subsequent Judiciary Committee hearings were opened to his team and him, he declined.

House Speaker Nancy Pelosi, D-Calif., has been holding up sending the articles of impeachment to the Republican-controlled Senate, which would hold a trial where Trump almost certainly will be acquitted. She says she wants more clarity about what a trial will look like. 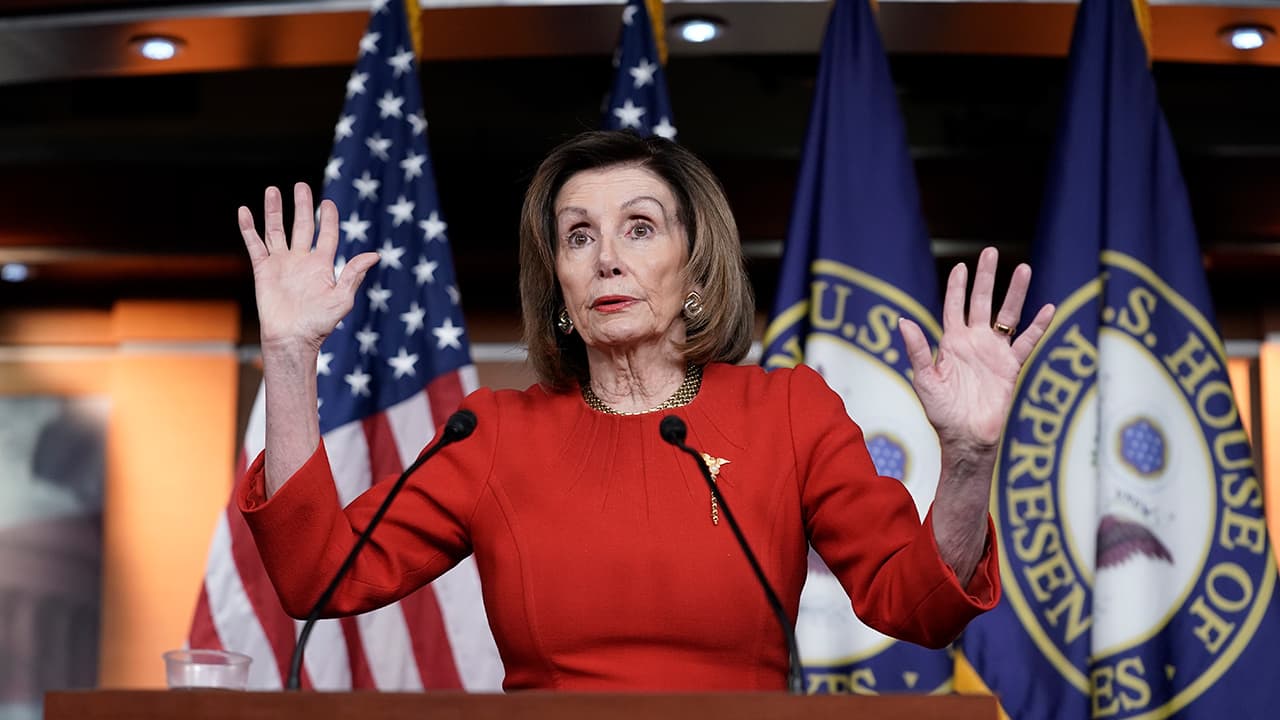 House Speaker Nancy Pelosi, D-Calif., meets with reporters at the Capitol in Washington, Thursday, Dec. 19, 2019, on the day after the House of Representatives voted to impeach President Donald Trump on two charges, abuse of power and obstruction of Congress. (AP Photo/J. Scott Applewhite)

THE FACTS: Not really. People with preexisting medical problems have health insurance protections because of Obama’s health care law, which Trump is trying to dismantle.

One of Trump’s major alternatives to Obama’s law — short-term health insurance — doesn’t have to cover preexisting conditions. Meanwhile, his administration has been pressing in court for full repeal of the Obama-era law, including provisions that protect people with preexisting conditions from health insurance discrimination. Republicans say they’d put new protections in place, but they haven’t spelled them out.

Insurers must take all applicants, regardless of medical history, and charge the same standard premiums to healthy people and those who had medical problems before or when they signed up.

Before the Affordable Care Act, any insurer could deny coverage — or charge more — to anyone with a preexisting condition who was seeking to buy an individual policy.

EDITOR’S NOTE — A look at the veracity of claims by political figures.