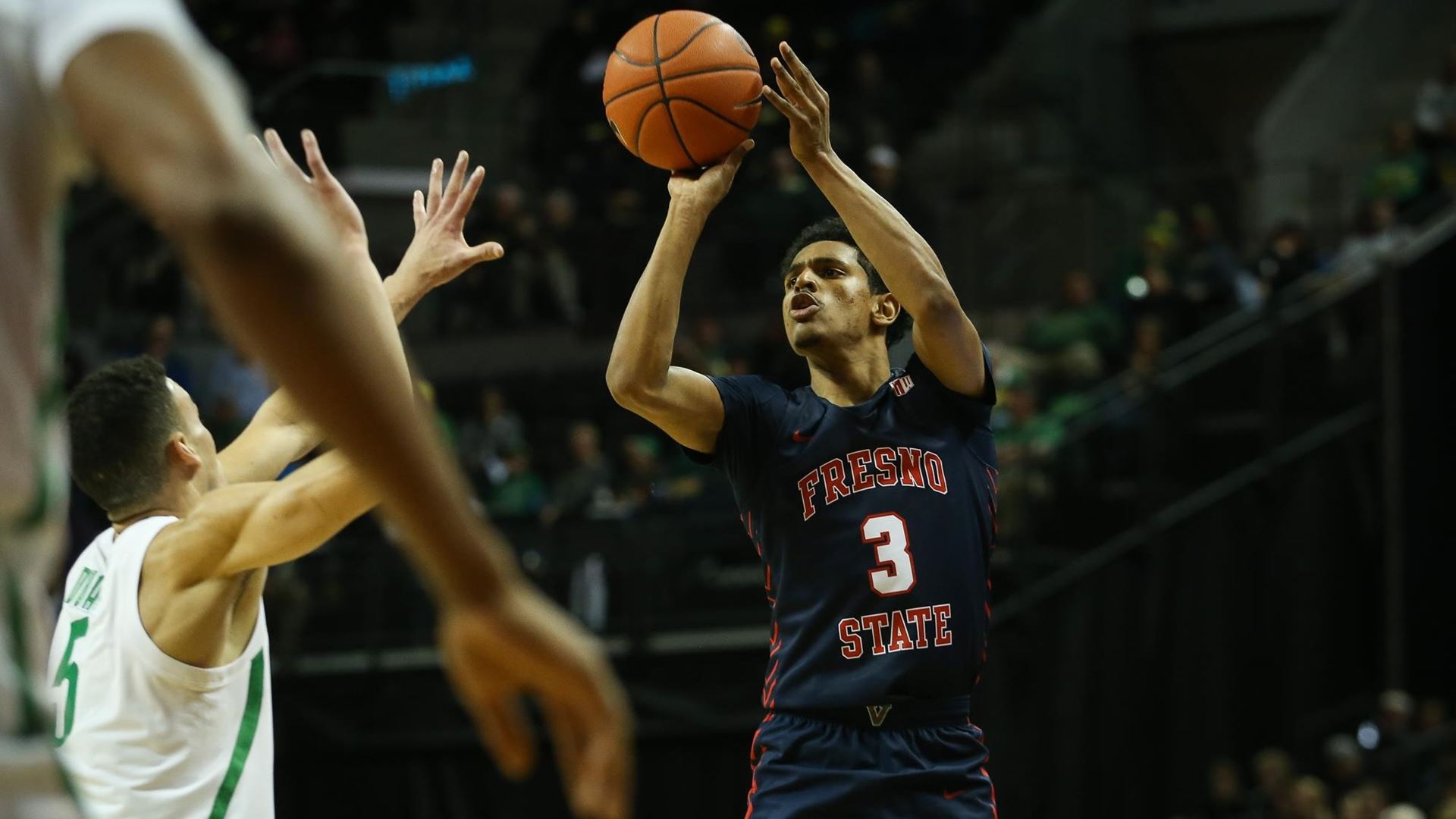 SAN DIEGO — Undefeated and 13th-ranked San Diego State passed the first test of its toughest stretch of the season when it outlasted old friend Justin Hutson and undermanned Fresno State.

Malachi Flynn scored 16 points and Matt Mitchell had 15 for SDSU, which beat the Bulldogs 61-52 Wednesday to remain one of two undefeated teams nationally.
Mitchell had three big baskets in the second half in his first start of the season and Flynn, a transfer guard, scored his 1,000th career point as SDSU (14-0, 3-0 Mountain West) remains on its hottest start in nine seasons. The Aztecs haven’t been this good since 2010-11, when they opened 20-0 behind Kawhi Leonard and reached the Sweet 16 for the first time before finishing 34-3.
“Someone asked me if I wanted to lose a game to take the pressure off and I said ‘Are you insane?’ coach Brian Dutcher said. “I want to win them all. We like the pressure. We want to keep it on and we’ll see as hostile an environment as anybody in the country when we go to Logan and play Utah State next game.”

Utah State was the unanimous preseason pick to repeat as the MWC men’s basketball champion. The Aggies beat the Aztecs 64-57 in the conference tournament championship game to earn an NCAA Tournament berth. The Aztecs missed the postseason.
SDSU and Auburn remain the nation’s only undefeated teams. The Aztecs snapped a five-game losing streak to the Bulldogs, who had won their last three games at Viejas Arena.

Jarred Hyder scored 23 for Fresno State (4-10, 0-3), which was without leading scorer Nate Grimes, out with a wrist injury. And, the Bulldogs continue to be without senior point guard Noah Blackwell, who has an injured right knee.
Mitchel hit a long jumper just inside of nine minutes to go and then drained a 3-pointer for a 46-36 lead.
Earlier in the half, Mitchell had a nice spin-move layup followed by a free throw, and then Flynn made a pretty left-handed layup gave SDSU a 33-23 lead.
“We just played our game,” Mitchell said. “Once you do that and you put all effort into every place, I feel like the result will be what it is. I felt like we came out tonight and we played our game. We do what we’re supposed to do. We executed the game plan and we came out with a win.”

Hutson, a former assistant coach with the Aztecs, said it hurt when Orlando Robinson got fouls. He had scored 27 and 25 points in the two previous games.
“Being short-handed with Nate Grimes out, you couldn’t afford Orlando to sit out,” Hutson said. “But we were able to keep it close in the first half and I knew how smart that staff is that they would go at him. So I left him out in the first half and we kept it close.”
Fresno State swept SDSU last year. But the Aztecs have transfers Flynn, Feagin and Yanni Wetzell this year.
“They got old quick,” Hutson said. “In this business, there’s a saying, ‘Never be young.’ That’s a goal. And they got old quick.”

Fresno State hosts San Jose State (5-10, 1-2) Saturday night. The Spartans have won two straight games.
Tickets are available for as low as $8 when purchased online through a special Star Wars Day promotion (GoBulldogs.com/starwars2020).
The Bulldogs play at New Mexico (13-3, 2-1) on Tuesday at 8 p.m. before having a week off leading into the Jan. 14 rematch with the Aztecs at the Save Mart Center.