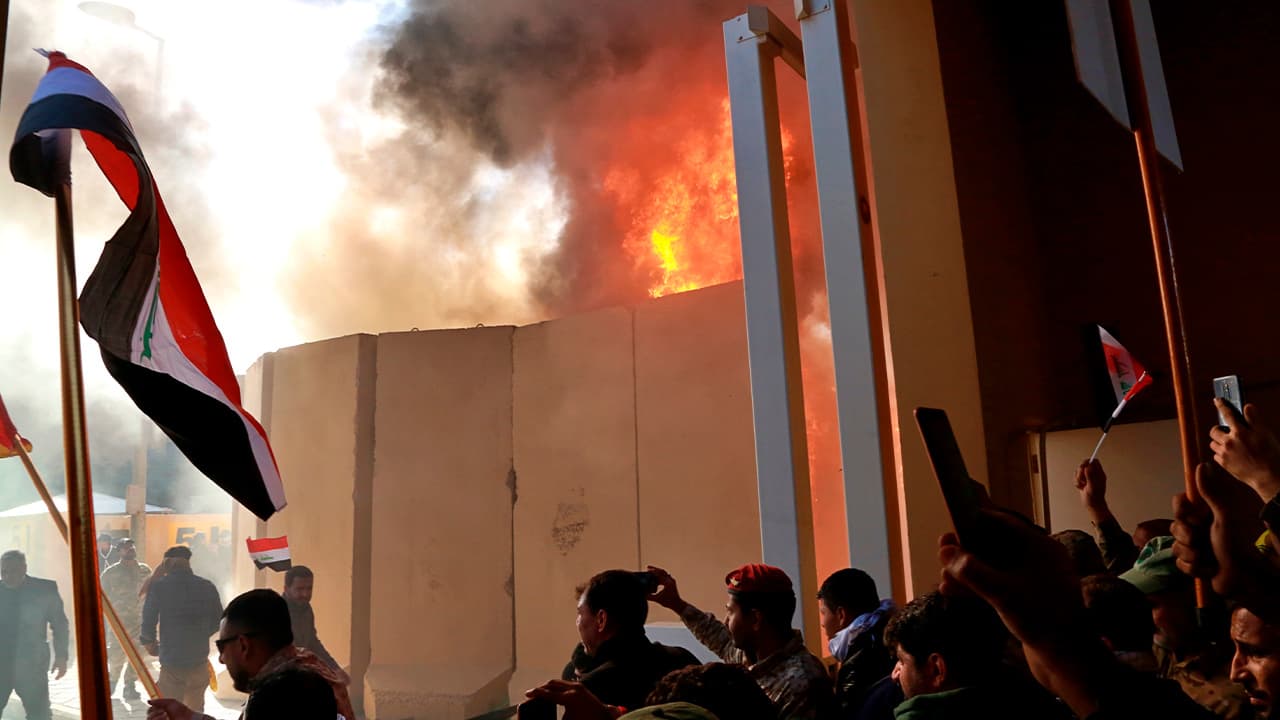 BAGHDAD — Angered by deadly airstrikes targeting an Iran-backed militia, dozens of Iraqi Shiite militiamen and their supporters broke into the U.S. Embassy compound in Baghdad on Tuesday, smashing a main door and setting fire to a reception area in one of the worst attacks on the embassy in recent memory. Shiite militia supporters are seen through a broken window of a checkpoint belonging to U.S. embassy, in front of the U.S. embassy, in Baghdad, Iraq, Tuesday, Dec. 31, 2019. Dozens of angry Iraqi Shiite militia supporters broke into the U.S. Embassy compound in Baghdad on Tuesday after smashing a main door and setting fire to a reception area, prompting tear gas and sounds of gunfire. (AP Photo/Khalid Mohammed)

The Developments Also Represent a Major Downturn in Iraq-U.S. Relations

By early evening, the protesters had retreated from the embassy compound butset up several tents outside where they said they intended to stage a sit-in. Dozens of yellow flags belonging to Iran-backed Shiite militias fluttered atop the reception area and were plastered along the embassy’s concrete wall along with anti-U.S. graffiti. American Apache helicopters flew overhead and dropped flares over the area.
Trump, who is spending the holiday week at his Florida home, is in “close touch” and receiving regular updates from his national security team, said White House press secretary Stephanie Grisham. She echoed the sentiment contained in Trump’s tweet earlier Tuesday.
“As the president said, Iran is orchestrating this attack, and they will be held fully responsible,” Grisham said in an emailed statement. “It will be the president’s choice how and when we respond to their escalation.”
The developments also represent a major downturn in Iraq-U.S. relations that could further undermine U.S. influence in the region and American troops in Iraq, and also weaken Washington’s hand in its pressure campaign against Iran.
Iraq has long struggled to balance its ties with the U.S. and Iran, both allies of the Iraqi government. But the government’s angry reaction to the U.S. airstrikes and its apparent decision not to prevent the protesters from reaching the embassy signaled a sharp deterioration of U.S.-Iraq relations.

Iraqi security forces made no effort to stop the protesters as they marched to the heavily fortified Green Zone after a funeral for those killed in the airstrikes. The demonstrators were allowed to pass through a security checkpoint leading to the area.
The marchers, many of them in militia uniforms, shouted “Down, down USA!” and “Death to America” and “Death to Israel” outside the compound, hurling water and stones over its walls. The mob set fire to three trailers used by security guards along the wall. AP journalists saw some try to scale the walls.
Others then smashed the gates used by cars to enter, and dozens pushed into the compound. The protesters stopped in a corridor after about 5 meters (16 feet), and were only about 200 meters away from the main building. Half a dozen U.S. soldiers were seen on the roof of the main building, their guns were pointed at the protesters.
The protesters raised yellow militia flags and taunted the embassy’s security staff, which remained behind glass windows in the gates’ reception area. They hung a poster on the wall declaring “America is an aggressor” and sprayed graffiti on the wall and windows reading, “Closed in the name of the resistance.”
“This is a victory in retaliation to the American airstrike. This is the initial retaliation, God willing, there will be more,” said Mahmoud, a fighter with the Imam Ali Brigades who was carrying a black bag filled with electricity cables that he said he took from the reception area. The Embassy Urged American Citizens Not to Approach the Compound

A video obtained by the AP showed militiamen trashing the reception area and taking away paperwork.
The embassy, on its Facebook page, urged American citizens not to approach the compound and “to review their personal security and emergency preparedness.”
An Iraqi employee at the embassy told the AP that the embassy’s security team had evacuated some local staff from a rear gate while others left by helicopters and the rest remained inside “safe” areas within the embassy. The employee spoke on condition of anonymity because of not being authorized to speak to journalists.
Multiple officials told the AP that the U.S. ambassador was traveling outside Iraq before the attack on the compound.
Some commanders of militia factions loyal to Iran joined the protesters outside the embassy in a strikingly bold move. Among them was Qais al-Khizali, the head of one of the most powerful Iranian-backed Shiite militias in Iraq who is on a U.S. terror list, and Hadi al-Amiri, the head of the state-sanctioned paramilitary Popular Mobilization Units, the umbrella group for the Iran-backed militias.
Jaafar al-Husseini, a spokesman for Kataeb Hezbollah, said the protesters had no intention of storming the embassy. He told the AP that the sit-in will continue “until American troops leave Iraq and the embassy is closed.”
Yassine al-Yasseri, Iraq’s interior minister, also appeared outside the embassy at one point and walked around to inspect the scene. He told the AP that the prime minister had warned the U.S. that strikes on the Shiite militiamen would have serious consequences.

“This is one of the implications,” al-Yasseri said. “This is a problem and is embarrassing to the government.”

Related Topics:airstrikeattacksBaghdadbreachIranIraqmilitiaShiitesoldiersU.S. Embassy
Up Next