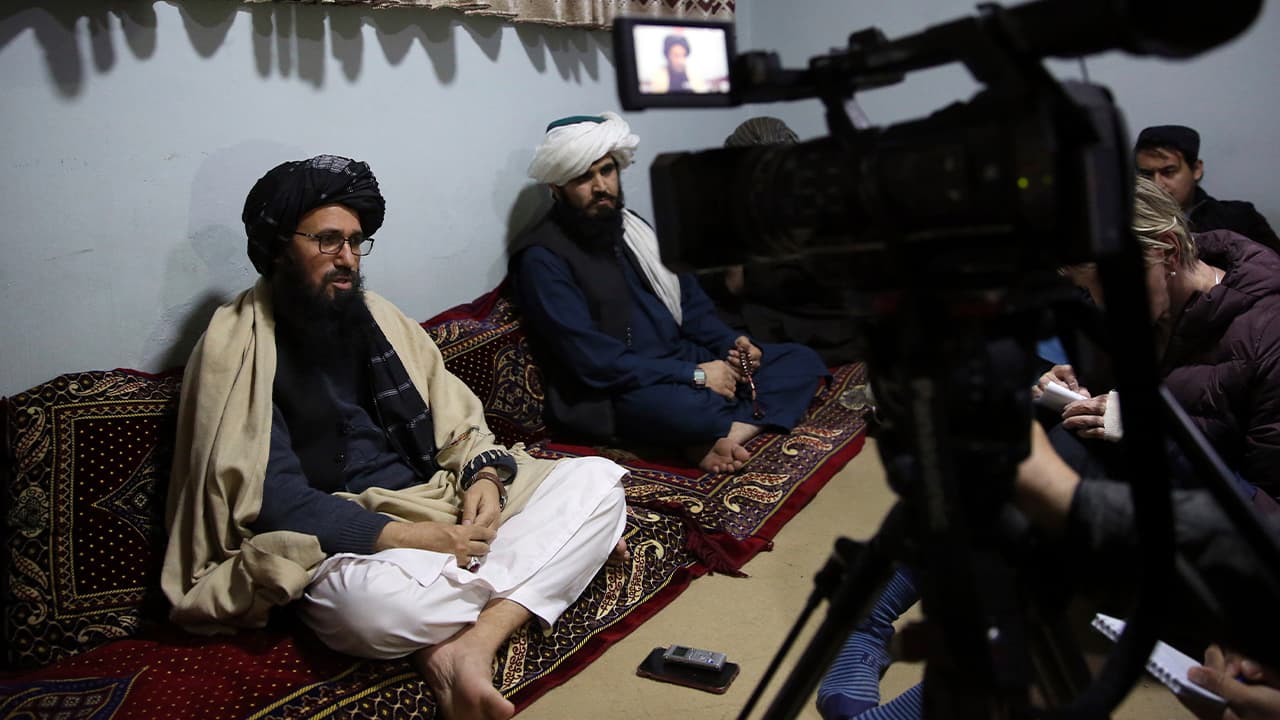 PUL-E-CHARKHI, Afghanistan — Thousands of Taliban prisoners jailed in Afghanistan as insurgents see a peace deal being hammered out between the United States and the Taliban as their ticket to freedom. In this Saturday, Dec. 14, 2019, photo, jailed Taliban are seen after an interview with The Associated Press inside the Pul-e-Charkhi jail in Kabul, Afghanistan. Thousands of Taliban prisoners jailed as insurgents see a peace deal being hammered out between the United States and the Taliban in Qatar as their ticket to freedom. They know prisoner release is a key pillar of any agreement that brings an end to Afghanistan’s 18- year war and Washington’s longest military engagement.(AP Photo/Rahmat Gul)

Taliban Negotiators Have Taken a Similar Tone in the Talks

“We want women to be educated, become engineers, we want women to work in every department,” said one prisoner, Maulvi Niaz Mohammed, though he said the work must be “based on Islam.” He said young Afghans should not fear the Taliban, “it is they who will build our country and develop it.”


“We want women to be educated, become engineers, we want women to work in every department… [Young Afghans should not fear the Taliban], it is they who will build our country and develop it.” — Maulvi Niaz Mohammed
Taliban negotiators have taken a similar tone in the talks. But there is a deep distrust on both sides of the conflict and many in the public worry what will happen if the Taliban, who ruled for five years until they were toppled in the 2001 U.S.-led invasion, regain authority.
On Sunday, the Taliban ruling council agreed to a temporary cease-fire in Afghanistan, providing a window in which a peace agreement with the U.S. can be signed, Taliban officials said. They didn’t say when it would begin.
The Taliban have well-organized communication networks inside Afghan prisons that record the latest arrests, province by province, as well as who is sick and who has died. It all gets delivered to a prisoners’ commission, devoted to their release and headed by Mullah Nooruddin Turabi, who during the Taliban rule served as justice minister and the “virtue and vice” minister in charge of religious police.
During that time, he was widely feared. Turabi was known to personally enforce the movement’s dictates, snatching music tapes from taxi drivers disobeying a ban on music and television, and stalking offices and businesses to search for violators who trimmed their beard or missed one of the five daily calls to prayer. Once in 1996, just days after the Taliban took control of Kabul from warring mujahedeen groups, when the AP was interviewing a Taliban fighter, Turabi slapped the hulking, 6-foot-tall fighter in the face for talking with a foreign woman journalist.

Built in the 1970s to house 5,000 prisoners, Pul-e-Charkhi now has 10,500 prisoners, according to the warden, Akhtar Noorzoi. They are packed in 11 cell blocks surrounded by turrets, guard towers and walls topped with razor wire.
The around 3,000 prisoners classified as Taliban are in their own block. The caution, even fear, felt by the guards and the administrators was unmistakable as they entered the Taliban’s cell block, protected by a phalanx of guards in armored vests and helmets, carrying bulky weapons that fire tear gas shells. Behind them on the dimly lit stairs were another half dozen guards, also in vests and helmets, automatic weapons at the ready.
The prisoners had free rein in a room where they could mingle, pray and study. The room was lined with small desks at which the Taliban sat on the carpeted floor in traditional style.
The AP interviewed the prisoners in a nearby room, unshackled and with no guards or administrators present. The prisoners decided among themselves who among them would be interviewed, without interference — at least none visible — from the administration.
Still, they spoke in whispers as they complained of maltreatment by guards, some of whom they said wanted revenge for personal losses blamed on Taliban attacks, while others fear a Taliban return.
Maulvi Niaz Mohammad emerged as the leader among the prisoners, although no one identified him as such. He was convicted to 15 years. During the Taliban rule, he served with Qari Ahmadullah, a Taliban intelligence commander who controlled much of northern Afghanistan.
He said barely 1,000 of the prisoners in the block are actually Taliban. The rest were accused of being sympathizers or members of the group, often to settle old scores; others were criminals. In this Saturday, Dec. 14, 2019, photo, Jailed Taliban pray inside the Pul-e-Charkhi jail after an interview with The Associated Press in Kabul, Afghanistan. Thousands of Taliban prisoners jailed as insurgents see a peace deal being hammered out in Qatar as their ticket to freedom. Prisoner release is a key pillar of any agreement the U.S. strikes with the Taliban to end Afghanistan’s 18-year war. (AP Photo/Rahmat Gul)

Medicine and Medical Treatment Are Often Slow in Arriving

One, Noorullah, 34, was sentenced to 20 years for killing his wife. He said that in prison he’d found comfort with the Taliban and sees their rule as preferable to the current government — though under the Taliban, he likely would have been sentenced to public execution at the hands of a relative of his wife.
He said that sentence would have been better, since now his family fears revenge attacks by his wife’s relatives. “Why is it better now? I have to pay the judge, pay to the police, just so my family is not bothered.”
One Taliban prisoner who gave his name only as Maulvi Sahab, saying he feared reprisals, said Taliban prisoners were beaten and taunted by guards. Dozens of prisoners were still in prison even after their sentences have been completed, sometimes for one week, one for a year, he said.
Medicine and medical treatment are often slow in arriving when they are for Taliban prisoners, he said. Every concession the Taliban have won has come through protests — refusing to return to cells or comply with orders until eventually some of their demands are met, including the use of mobile phones, which he and several others had in their hands as they spoke.
The prison warden, Noorzoi, rejected the Taliban litany of complaints. He said they promptly receive medical treatment, have access to literacy classes, religious schools and even a gymnasium and are served meat at least three times a week. He said a hospital is under construction.
Treatment, he insisted, was “better than some of them would get in their villages.”

Violent Outbreaks Are Not Uncommon

Pul-e-Charkhi prison is Afghanistan’s most notorious, with a disturbing history of violence, mass executions and torture. Mass graves have been uncovered dating back to the purges carried out by Kabul’s Soviet Union-backed governments of the late 1970s and 1980s. Torture cells and underground holding areas have been unearthed.