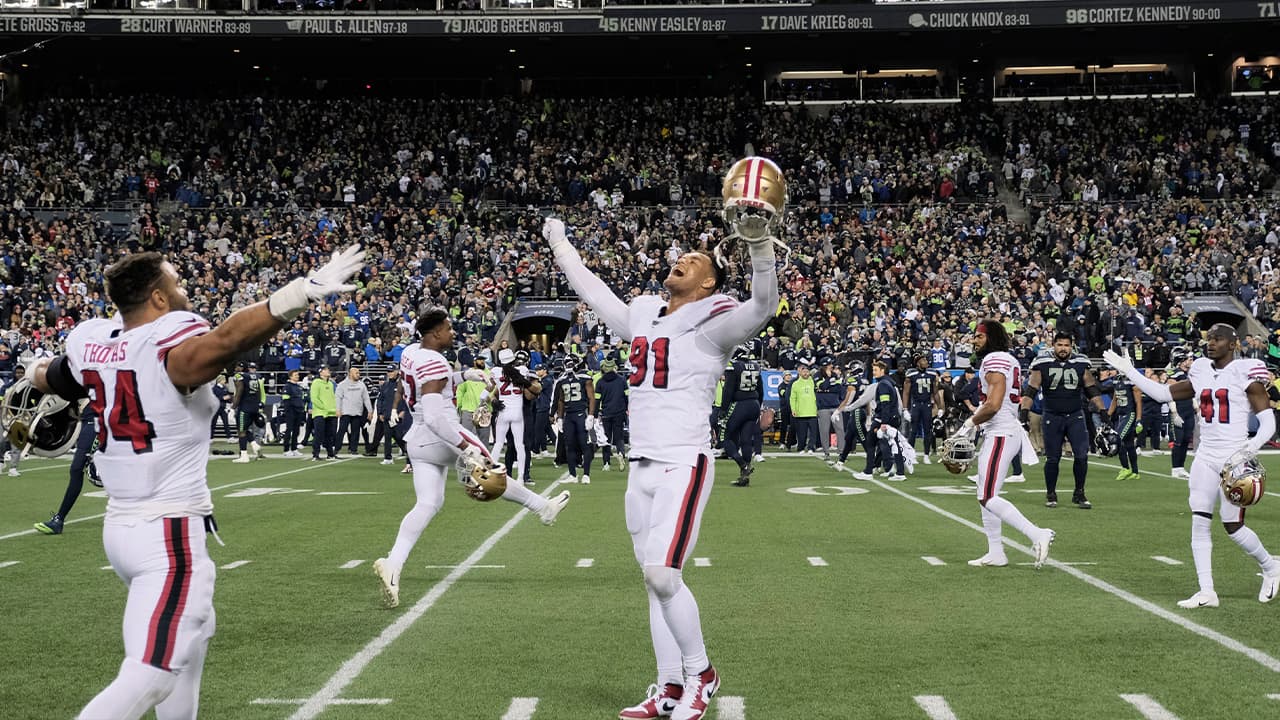 SEATTLE — Richard Sherman once again wore the hat of a division champion as he walked out of the locker room in Seattle. Seattle Seahawks’ DK Metcalf, left, is wrapped up by San Francisco 49ers’ Ahkello Witherspoon as he comes down with a touchdown reception in the end zone during the second half of an NFL football game, Sunday, Dec. 29, 2019, in Seattle. (AP Photo/Ted S. Warren)

“It’s pretty incredible, especially from the start of the season and the hearsay and everything of our team and what we were going to do, and to come out here and get the one seed, it’s a pretty nice feeling,” quarterback Jimmy Garoppolo said.
It was nearly Seattle celebrating what would have been an unlikely comeback victory on a night when Seahawks fans showed up hoping for a division title and eager to celebrate the return of running back Marshawn Lynch.
Seattle took possession at its own 27 with 2:27 left down by five. Russell Wilson drove the Seahawks deep into San Francisco territory and on fourth-and-10, Wilson hit John Ursua for 11 yards to the 1. Wilson spiked the ball, but Seattle was called for delay of game on second down with confusion about whether Lynch should enter the game. Backed up to the 6, Wilson was incomplete on two straight passes — including a third-down pass for Jacob Hollister on which Seattle begged unsuccessfully for pass interference against Fred Warner.
NFL senior VP of officiating Al Riveron said the play was looked at in New York but based on the replay there wasn’t enough evidence to stop the game for a further look.
“I felt him grabbing me but you don’t get every call. I didn’t get that call,” Hollister said.

On fourth-and-goal, Hollister caught a pass underneath but was immediately knocked down by Greenlaw with less than 10 seconds remaining. Replay confirmed Hollister hit the ground before the ball reached the goal line, and San Francisco’s celebration was on. Samuel Was a Nightmare for the Seahawks

Those same fans were silenced in barely four minutes. San Francisco marched downfield with more big plays as Garoppolo hit George Kittle and Deebo Samuel. Mostert capped the drive with his second touchdown — a 13-yard run — and a 26-14 lead with 5:51 remaining.
Seattle scored with 3:36 left on a 14-yard touchdown pass from Wilson to DK Metcalf, but Wilson didn’t have one last magical moment.
Wilson was 25 of 30 for 233 yards. Lynch had 12 carries for 34 yards in his first game since October of last season.
“That was a wild one. We had several different opportunities,” Wilson said. “We came a half-inch short, unfortunately.”
Samuel was a nightmare for the Seahawks, scoring on a 30-yard reverse in the first half and finishing with five catches for 102 yards. Kittle, who didn’t play in the first meeting between the teams in November, had seven catches for 86 yards. Even fullback Kyle Juszczyk had a huge play with a 49-yard catch immediately after Seattle pulled to 13-7 early in the second half.
“You can’t leave the door open, which we did,” Kittle said. “Thankfully we were able to answer every time they did and our defense was able to hold onto them and finish the game.”

Seattle wide receiver Jaron Brown sustained a knee injury in the first quarter and was out for the game. Brown got hit low on the first series and never returned. Seattle was already thin at wide receiver with Malik Turner out due to a concussion.
Mychal Kendricks left in the third quarter with a right knee injury after losing Juszczyk on a 49-yard reception. Kendricks had been dealing with a hamstring injury for several weeks. Seattle Seahawks’ John Ursua, left, makes a catch at the one-yard line to give the team a first down with less than a minute left as San Francisco 49ers’ K’Waun Williams tackles during the second half of an NFL football game, Sunday, Dec. 29, 2019, in Seattle. The 49ers won 26-21. (AP Photo/Stephen Brashear)

San Francisco owns a rare bit of NFL history. The 49ers played the first game of the 2010s and the last game of the decade as well.
San Francisco played on Jan. 3, 2010 — Week 17 of that season — and its game against St. Louis was the first to kick off that day.
The Sunday night game in Seattle was the final NFL game to be played in the 2010s.

Bulldogs Blow Another Lead in Loss to UC Riverside