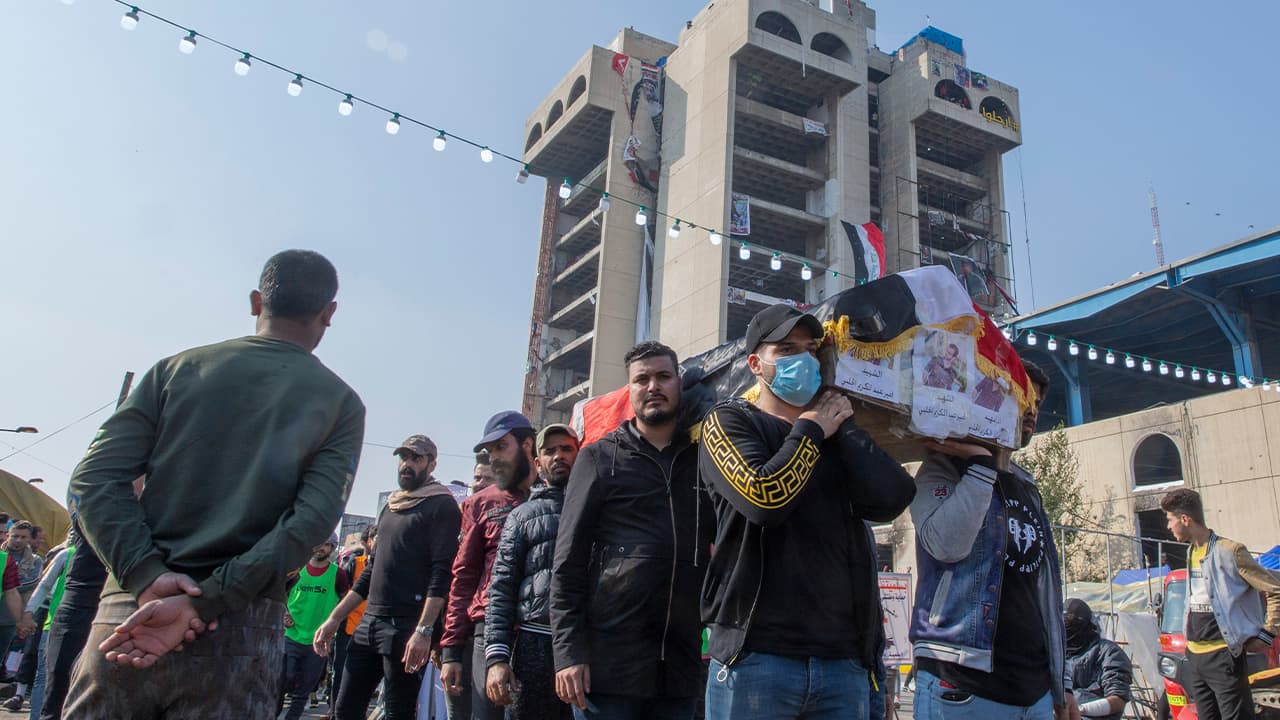 BAGHDAD — Iraq’s president refused Thursday to designate the Iran-backed parliamentary bloc’s nominee for prime minister after he was rejected by anti-government protesters, saying he was prepared to submit his resignation to Parliament.
Barham Saleh said in a statement issued by his office that he would not name the governor of the southern Basra province, Asaad al-Eidani, as the country’s next prime minister “to avoid more bloodshed and in order to safeguard civil peace.”
Al-Eidani’s name was proposed Wednesday by the Fatah bloc, which includes leaders associated with the Iran-supported paramilitary Popular Mobilization Forces. However, he was promptly rejected by Iraqi protesters, who poured into the streets to denounce his nomination over megaphones, calling for an independent candidate.
Saleh, in the statement addressed to the parliament speaker, said his refusal to designate al-Eidani could be construed as a violation of the constitution and said he was therefore putting his resignation at the disposal of Parliament. He stopped short of actually submitting his resignation, leaving it up to the lawmakers to decide “as they see fit.”
The move plunges the war-scarred country into further uncertainty and deepens a political impasse amid unprecedented mass protests that erupted on Oct. 1. The leaderless protesters are calling for the overthrow of Iraq’s entire political class over corruption and mismanagement. The protests, concentrated in Baghdad and the mostly Shiite-inhabited south, have also turned into an uprising against Iran’s political and military influence in the country. Mourners carry the body of their fellow protester Ameer al-Jalabib onto the top of cement blocks that separate them from riot police on a bridge, under a poster with his picture, his name and Arabic that reads “the hero Martyr,” during his funeral in Tahrir Square, Baghdad, Iraq, Thursday, Dec. 26, 2019. Ameer succumbed to his wounds on Wednesday after being injured during anti-government demonstrations on October 27, 2019. (AP Photo/Nasser Nasser)

Shortly after he issued his statement Thursday, Saleh left Baghdad, headed to his hometown in the northern city of Sulaimaniyah.


“This is a victory for the demonstrators and a victory for the blood of the martyrs. Because of street pressure, the candidate of the (political) parties was rejected, and we will not accept and we will not return to our homes if the party candidate is nominated.” — activist Hassanein Gharib
It was not clear how parliament would react to the resignation offer. According to the constitution, parliament has seven days to accept or reject a president’s resignation before it automatically goes into effect, and Saleh’s move did not amount to a resignation.


Related Story: A Scathing Pentagon Report Blames Trump for the Return of ISIS in Syria and

Protesters gathered in Baghdad’s Tahrir Square, which has emerged as a focal point of the protests, celebrated Saleh’s decision.
“This is a victory for the demonstrators and a victory for the blood of the martyrs,” said activist Hassanein Gharib. “Because of street pressure, the candidate of the (political) parties was rejected, and we will not accept and we will not return to our homes if the party candidate is nominated.”
A leading politician and former government official familiar with the latest developments said the situation was now open to all possibilities after Saleh offered to resign. He added that the president traveled to Sulaimaniyah in Iraq’s semi-autonomous Kurdish region to get away from the pressures being exerted on him.
“The situation is very dangerous. Iraq is going through a real crisis that may lead to the collapse of the state,” he warned, speaking on condition of anonymity to divulge sensitive information.

There Are Two Main Blocs in the Iraqi Parliament

Prime Minister Adel Abdul-Mahdi submitted his resignation late last month under mounting pressure from the protesters calling for his ouster. More than 450 people have been killed since October, the vast majority of them protesters killed by security forces firing tear gas and live ammunition.
According to Iraq’s constitution, the largest bloc in parliament is required to nominate the new prime minister, who then has to be designated by the president. A deadline to name a new prime minister has been missed twice over disagreements on which is the largest bloc in the parliament following last year’s elections.

There are two main blocs in the Iraqi Parliament — Sairoon, led by populist Shiite cleric Muqtada al-Sadr, and Fatah, headed by Hadi al-Amiri. But the numbers in the blocs have continued to change since last year’s elections, with an unknown number of lawmakers leaving some blocs and joining others.
Last Saturday, Iraq’s Federal Supreme Court provided guidance in a statement, but stopped short of naming the largest bloc. It said the decision should be based on parliament’s first session after taking office last year. But the court also said it would accept if two or more lists had merged to become the largest bloc.
The same day, President Saleh sent the court’s response to parliament, asking the legislature to say which is the largest bloc.
A Facebook page close to al-Sadr commented on the president’s position saying: “Thank you, Mr. President, for rejecting the candidates that the people reject, a position that history, and the (Iraqi) people and the (Shiite religious) authority will record.”