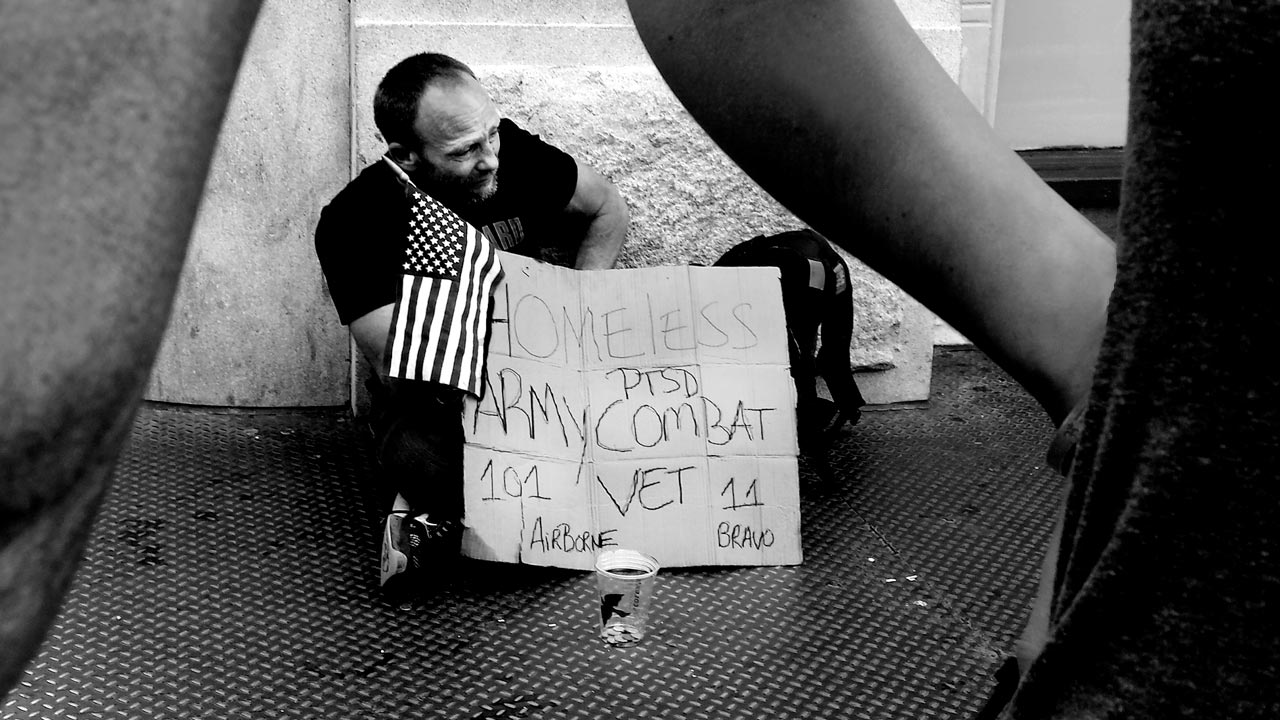 In 1830, nearly 50 years after the end of the Revolutionary War, the artist John Neagle painted a haunting portrait of a homeless veteran named Joseph Winter.
Winter was an immigrant from Germany who volunteered to help deliver American independence. After risking his life to defend a nation that became a beacon of hope for individual liberty and freedom around the world, Winter became a weaver in Pennsylvania.
But as old age approached, he was unable to work and became homeless. As Neagle put it, Winter became “a lone wanderer in a world evincing but little feeling or sympathy for him.”

Too Many Veterans Have No Place to Call Home

The painting reveals a sad truth about our great nation — the problem of veteran homelessness has been with us from the very beginning. While America is the “Land of the Free and the Home of the Brave,” too many of our brave warriors who fought to defend our freedoms never had a place to call home.
But the story of Neagle’s painting also carries with it a more optimistic view of America — it became popular in 1831 and helped raise the nation’s awareness of this problem.
After viewing the portrait of Winter, one observer noted, “It is a burning shame that beggary and scoffing are the lot of those aged benefactors of their country.”

Closer Than Ever to Eliminating Problem

Nearly two centuries after Neagle raised the conscience of a nation, veteran homelessness still exists. But I’m pleased to report that we are closer than ever to eliminating this problem, and there are steps each of us can take to eradicate it.
From 2017 to 2018, the number of veterans experiencing homelessness fell 5.4%, and that number dropped an additional 2.1% from 2018 to 2019.
In the last two fiscal years, the Department of Veterans Affairs and the Department of Housing and Urban Development have helped 124,900 veterans and their families by housing them or preventing them from becoming homeless.


Continued progress is only guaranteed by a continued sense of urgency and work to ensure veterans at risk of homelessness are identified and put in touch with people who can help. That includes dealing with factors that contribute to homelessness, such as unemployment, addiction and mental health.
Still, we know that we’ll only solve the problem once and for all by working with partners across the country, including state and local governments, NGOs, faith-based groups and the private sector.

These efforts have helped 78 regions of the country and three states — Connecticut, Delaware, and Virginia — effectively end veteran homelessness. And more regions are getting closer all the time.
Continued progress is only guaranteed by a continued sense of urgency and work to ensure veterans at risk of homelessness are identified and put in touch with people who can help. That includes dealing with factors that contribute to homelessness, such as unemployment, addiction, and mental health.
It can also include efforts made at the individual level. Caring for those who defended this nation was never meant to be an activity reserved for a single federal department — it’s something we can all do.

Here’s How to Help

If you’re able to help provide affordable housing to a veteran, you can visit this site, https://www.va.gov/homeless/homeless-coordinators.asp, to get in touch with homeless coordinators in your area.
If you work for a company that can help veterans stay employed, you can find community employment coordinators here: https://www.va.gov/homeless/cec-contacts.asp.
And you can find other ways to connect with your community and make donations by visiting https://www.va.gov/homeless/stakeholders.asp.
The holiday season in America is a time for thankfulness, love, and resolutions. Let us be thankful for the 41 million brave men and women who have sworn an oath to defend us since 1775, show them that we love them, and resolve to end finally the plague of veteran homelessness.
About the Author
Robert Wilkie is the secretary of Veterans Affairs. He wrote this for InsideSources.com.

The Debate: Can Politicians Block You on Social Media?