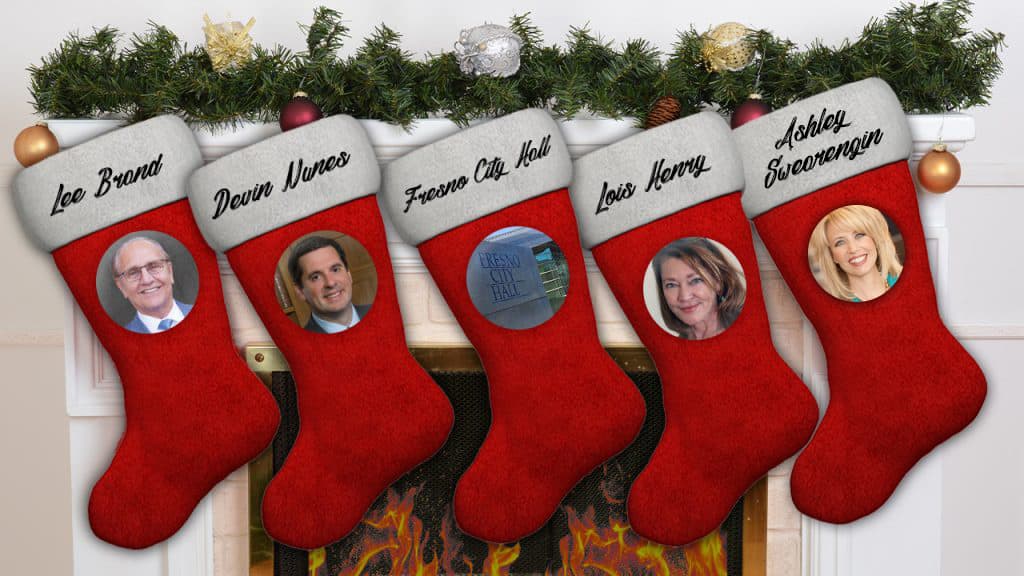 Jolly old Santa Mac is heading down the chimney with a bag of gifts for:
— The seven Fresno Unified trustees, in the words of Toby Keith, “a little less talk and a lot more action” on student achievement. — The Gap, the corporate heart to do right by Fresno by donating land for a no-kill animal shelter by the airport.
— Derrel Ridenour, Darius Assemi and the late David McDonald, a thank-you for your support and love of dogs, otherwise known as “our furry friends.”
— Derek Carr, Quincy Pondexter, the Brothers Lopez, Sloane Stephens, and all the other star professional athletes who give back to Fresno, keys to the city.
—  California, affordable housing that’s truly affordable.
— NIMBYs, dropping the “N” for a “Y” to become Yes in My Back Yard. (I’m pretty sure this gift won’t be opened.)
— Rep. Devin Nunes, a conspiracy theory a month to satiate Fox News — and keep the rest of us laughing off our chairs.
— The San Joaquin River Parkway, the kind of public access people have been dreaming about for decades.
— Lois Henry, thousands of new readers (and supporters) for her SJV Water website. (Her knowledge of Valley water issues is deeper than a west-side well.)
— Kalen DeBoer, the recipe for Turnaround Ala Tedford. I’m sure his old Fresno State football boss will share it.
— California, which is so big and so challenged that it needs two gifts, a variation on the words often attributed to Mark Twain: “Whiskey is for drinking and water is for fighting.” Let’s try, “Water’s for sharing by cities, farmers, and fish, and the more voluntary agreements the better.” (Alas, a gift that will be exchanged for a water lawyer retainer.)
— All who occupy the sanity zone, the rise of a third major political party populated by Blue Dog Democrats and Principled Republicans.
— Mark Arax, another year of poking the bear that is California and the city of untapped potential that is Fresno.
— Armenians around the globe, an American president with the gumption to stand up to Turkey and say “genocide.” (This comes with a raincheck.)
— Ashley Swearengin, a successful year piloting Fresno DRIVE, the 10-year effort to elevate economic and racial equality in our city.
— Fresno residents, passage of a 2020 compromise sales tax proposal that funds more parks and keeps us safer. (This gift was mistakenly delivered in 2018 to a noncompromising city council.)
— Gov. Gavin Newsom, a transformation plan for PG&E that doesn’t cost ratepayers an arm and a leg. (Less focus on Trump, and more on California’s economic divide, too.)
— PG&E, the realization that safety trumps profits.
— Mark Standriff, a role of a lifetime. (On stage, not in politics.)

I will be eternally grateful to @joelabels & my @StageWorksFrsno family for some of the most wonderful experiences in my theater life and some of the dearest friends I will ever have. There will be a hole there that will be hard to fill. #SWFForever https://t.co/ffYE6HkkHI

Merry Christmas, Happy Hanukkah, and to all, a great 2020!