Brand's New Initiative Would Take Out the Trash 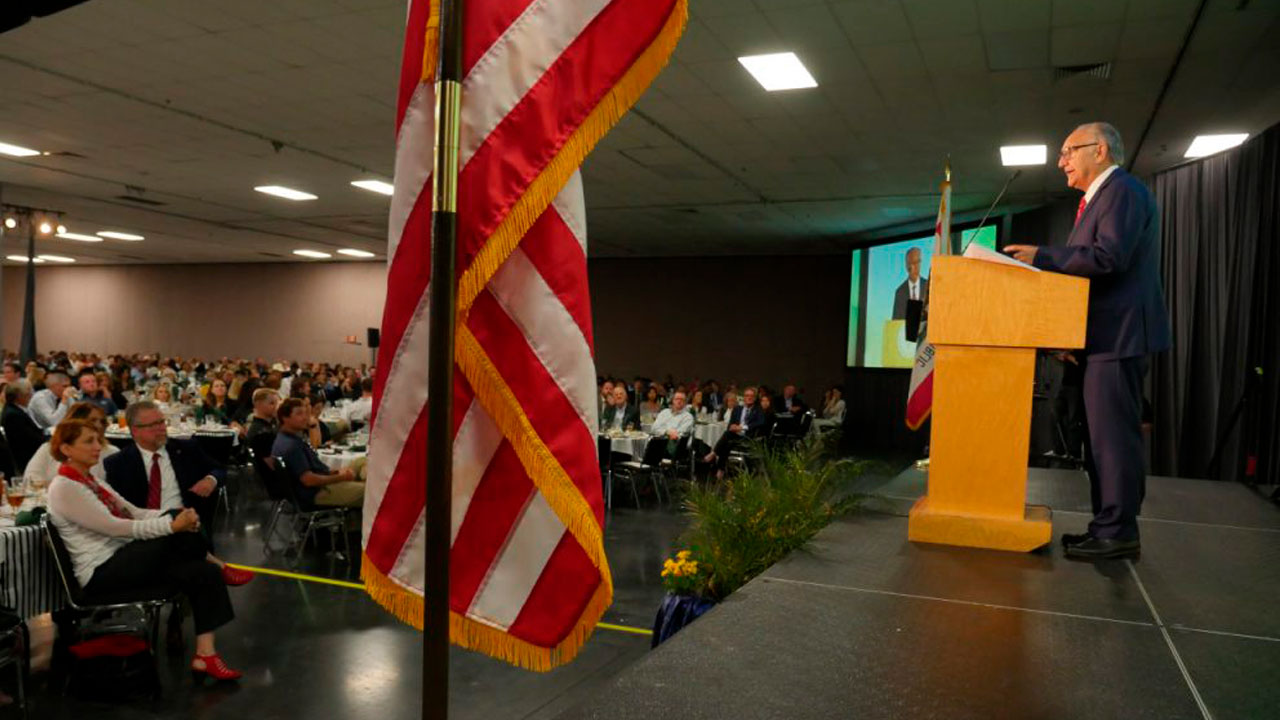 Mayor Lee Brand wants to take out the trash.
Speaking Wednesday to nearly 900 people at his State of the City address at the convention center, Brand announced an initiative he called Keep Fresno Beautiful.
As the name implies, the goal is to pick up trash in and around the city.

Brand said trash was one of the top complaints from residents and visitors.
“It’s ugly and we can do something about it. That means a community-wide effort to clean up Fresno streets, alleys and highways,” Brand said.
Brand said the goal is a long-term effort “to tackle trash in the city of Fresno.”
That includes cracking down on illegal dumping; contracting out cleanup work to agencies who hire veterans, homeless and people in recovery assistant programs; and offering one-time cleanup assistance to property owners, with the condition that those properties are maintained.
Brand wants plenty of help from the community, urging community groups, churches, and the Scouts to adopt neighborhoods.

“Fresno has momentum. We have momentum in our economy, momentum in our downtown, momentum in our neighborhoods, and most of all, momentum in our attitude.” — Mayor Lee Brand
In his third State of the City and his first since announcing he would not run for reelection, Brand delivered speech expected of a leader proud of the city he runs. He spelled out his accomplishments and goals at the event hosted by the Fresno Chamber of Commerce.

“Fresno has momentum. We have momentum in our economy, momentum in our downtown, momentum in our neighborhoods, and most of all, momentum in our attitude,” Brand said.
Brand encouraged disparate sides to put aside differences and “finish strong — together.”
“The state of our city is strong. But our strength is being threatened by forces that seek to create the diseases in order to sell the remedy. I seek the better angels of our natures. I seek grace in the middle of outrage. I seek the sustainable solution when the mob calls for impulsive action, and I seek the light through darkness,” Brand said.
During his speech, Brand touted reduced violent crime, faster planning department action on permits, and increased FAX bus ridership.
He also noted the launch in the last year of the rental housing registry with 85,000 units signed up, the creation of a motel owners group to help clean up Parkway Drive, and a 311 non-emergency call system.

Prior to his speech, Brand honored Debra Rush of Breaking the Chains with a key to the city.
Rush once lived life on the streets as a prostitute. Now she helps other women turn their lives around by providing shelter and counseling.

The mayor said there were 2,000 responses to an online survey asking what residents want in their next police chief. The city also held community meetings in each council district. Chief Jerry Dyer is scheduled to retire in October after 18 years at the job.
“I got the message from people that they want to see community-based policing,” Brand said. “Some segment wanted to see someone new from outside the force; some wanted some people in the current force. I’m keeping all my options open. I want to be fair. This has probably been one of the most democratic and transparent processes the city has ever done.”

At least two internal candidates have applied for the job. Deputy chief Mike Reid confirmed his interest Wednesday with GV Wire. The 25-year veteran joins police Capt. Mark Salazar in seeking to take the helm from Dyer, who last month announced he is running for mayor.
Brand said a screening committee would pare the candidates to three or so before he and city manager Wilma Quan make their choice.
The recruitment period closes June 30. The Miguel And Garry Show Continues At City Hall