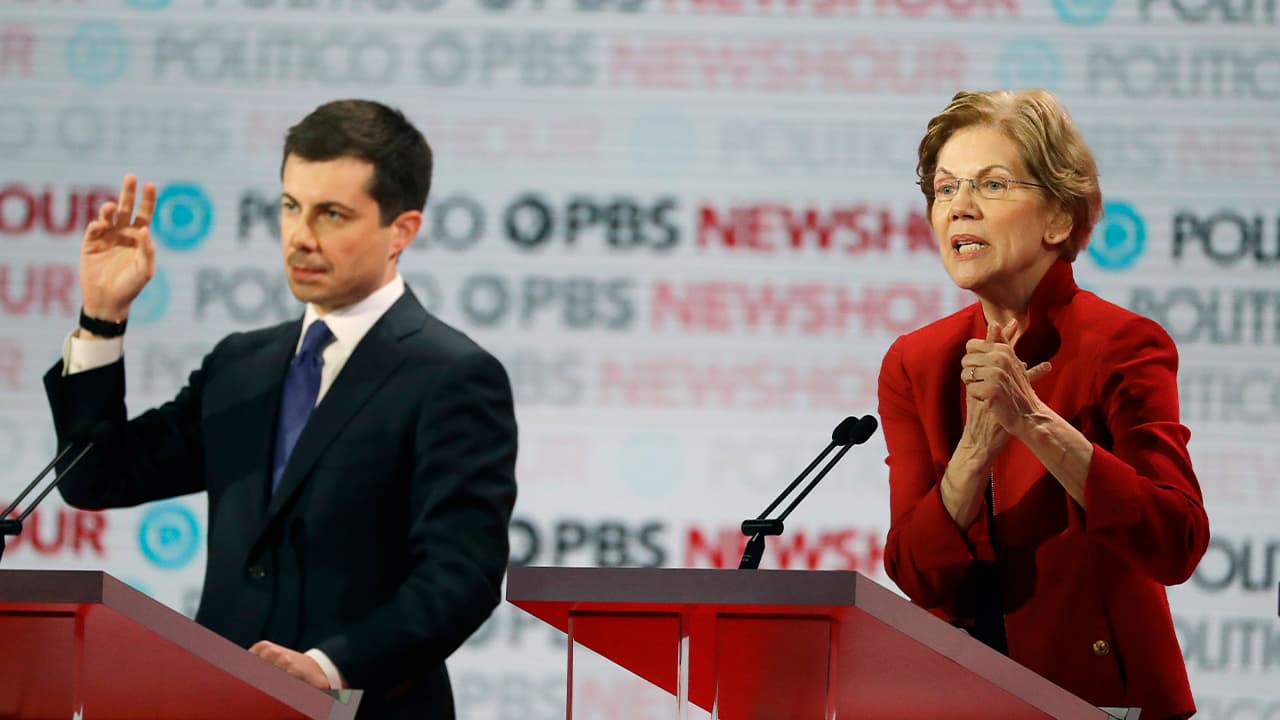 
“Billionaires in wine caves should not pick the next president of the United States.” — Elizabeth Warren
Buttigieg, the 37-year-old mayor of South Bend, Indiana, has emerged as an unlikely presidential power player, gaining ground with a centrist message. Warren, the Massachusetts senator who has become his progressive foil, attacked Buttigieg’s fundraising practices. And Minnesota Sen. Amy Klobuchar, who is competing with Buttigieg for moderate voters, challenged his limited governing experience.
The debate came a day after a highly contentious vote to impeach President Donald Trump, which showed in dramatic relief how polarized the nation is over his presidency. With the Republican-controlled Senate likely to acquit him, the stakes are high for Democrats to select a challenger who can defeat Trump in November.
The forum highlighted the choice Democrats will have to make between progressive and moderate, older and younger, men and women and the issues that will sway the small but critical segment of voters who will determine the election. The candidates sharply disagreed about the role of money in politics, the value and meaning of experience and the direction of the American health care system.
In the most pointed exchange, Warren zeroed in on Buttigieg’s recent private meeting with wealthy donors inside a California “wine cave,” the details of which were recounted in a recent Associated Press story.
“Billionaires in wine caves should not pick the next president of the United States,” she charged.
Buttigieg, who has surged into the top tier of the Democratic Party’s 2020 primary in part because of his fundraising success, did not back down. “We need to defeat Donald Trump,” he responded, noting that Trump’s reelection campaign has already accumulated hundreds of millions of dollars. “We shouldn’t try to do it with one hand tied behind our back.”
The focus on Buttigieg at the Los Angeles debate highlighted his strength in the Democratic Party’s turbulent primary contest just 46 days before voting begins, with polls showing him at or near the lead in Iowa’s kickoff caucus. But the confrontation also raised broader concerns about the direction of the race: Democrats are not close to unifying behind a message or messenger in their quest to deny Trump a second term.


“We need to defeat Donald Trump. We shouldn’t try to do it with one hand tied behind our back.” — Pete Buttigieg
In fact, as the debate revealed, the party is still consumed by a high-stakes tug-of-war between feuding factions that must ultimately come together in order to beat Trump. One side, led by Warren and Vermont Sen. Bernie Sanders, is demanding transformational change to the U.S. economy and political system. The other, led by former Vice President Joe Biden, Buttigieg and Klobuchar, prefers a more cautious return to normalcy after Trump’s turbulent reign.
Klobuchar repeatedly dinged Buttigieg as “mayor,” noting that he lost his only statewide campaign in Indiana as well as his bid to become the Democratic National Committee chairman.
“I have not denigrated your experience as a local official. I have been one,” Klobuchar said. “I just think you should respect our experience when you look at how you evaluate someone who can get things done.”
Buttigieg responded: “You actually did denigrate my experience, senator.”’
Biden, having seemingly regained his footing as the establishment favorite in the crowded contest, sidestepped any missteps or damaging attacks. But in the debate’s final moments, he engaged in a heated exchange with Sanders over health care.
Sanders has proposed a “Medicare for All” single-payer system, which Biden dismissed as “unrealistic.” Biden pushed a plan that he says would build on “Obamacare,” but Sanders argued that Biden would just be keeping the status quo. Feud Softened by the Time Moderators Posed Their Final Question

The focus of attention throughout the night, however, was Buttigieg.
The small-city mayor, who would be the first openly gay president, has grappled with questions about his ties to Wall Street and wealthy donors for several weeks. In recent days, he hosted wealthy donors at a California wine cave, disclosed consulting work for a big insurance company that preceded layoffs and released a list of wealthy bundlers.
His challenges with black voters are well documented, but suddenly, Buttigieg’s corporate connections are beginning to alienate the party’s progressive activists.
“I do not sell access to my time,” Warren said of Buttigieg’s aggressive fundraising schedule.
“As of when, Senator?” Buttigieg fired back, referring to Warren’s reliance on wealthy donors before becoming a presidential candidate.
The feud softened by the time moderators posed their final question: Is there another candidate onstage whom you would like to ask forgiveness from or give a gift to?
Buttigieg said it would be a gift for anyone on stage to become president “compared to what we’ve got.” And he called for unity once Democrats pick their nominee.
“Let’s make sure there’s not too much to ask forgiveness for by the time that day comes,” he said.
When it was her turn, Warren’s voice briefly quivered when she said she’d ask for forgiveness. Sometimes, she said, she gets “a little worked up” and “a little hot.” But “I don’t really mean to.”

Ending With Just Seven on Stage

Democrats faced a silent challenge Thursday. For the first time this primary season, no black or Latino candidate appeared onstage. The omission was embarrassing, at best — and politically dangerous, at worst — as Democrats fight to convince people of color that they’re not taking their vote for granted.
Asked what message the lack of diversity on the debate stage sends, Sanders tried to shift the conversation back to a discussion about climate change. Admonished by one of the moderators to stick to the question, Sanders countered that people of color will suffer “the most if we do not deal with climate change.”
The only nonwhite candidate on stage, Andrew Yang, called it “both an honor and a disappointment” to be the only candidate of color on the debate stage. He said he missed California Sen. Kamala Harris, who folded her campaign this month, and New Jersey Sen. Cory Booker, who failed to qualify for the debate. “I think Cory will be back,” Yang predicted.
For most of the political world, Thursday’s debate marks the informal conclusion of the first year of the 2020 presidential campaign.
It has been a turbulent season that began with more than 20 candidates and ends with just seven on stage. The infighting on display, however, and the relatively large number of candidates, could lead to a long, expensive and painful nomination fight ahead.
The next debate is scheduled for Jan. 14, just 20 days before voting begins in Iowa.