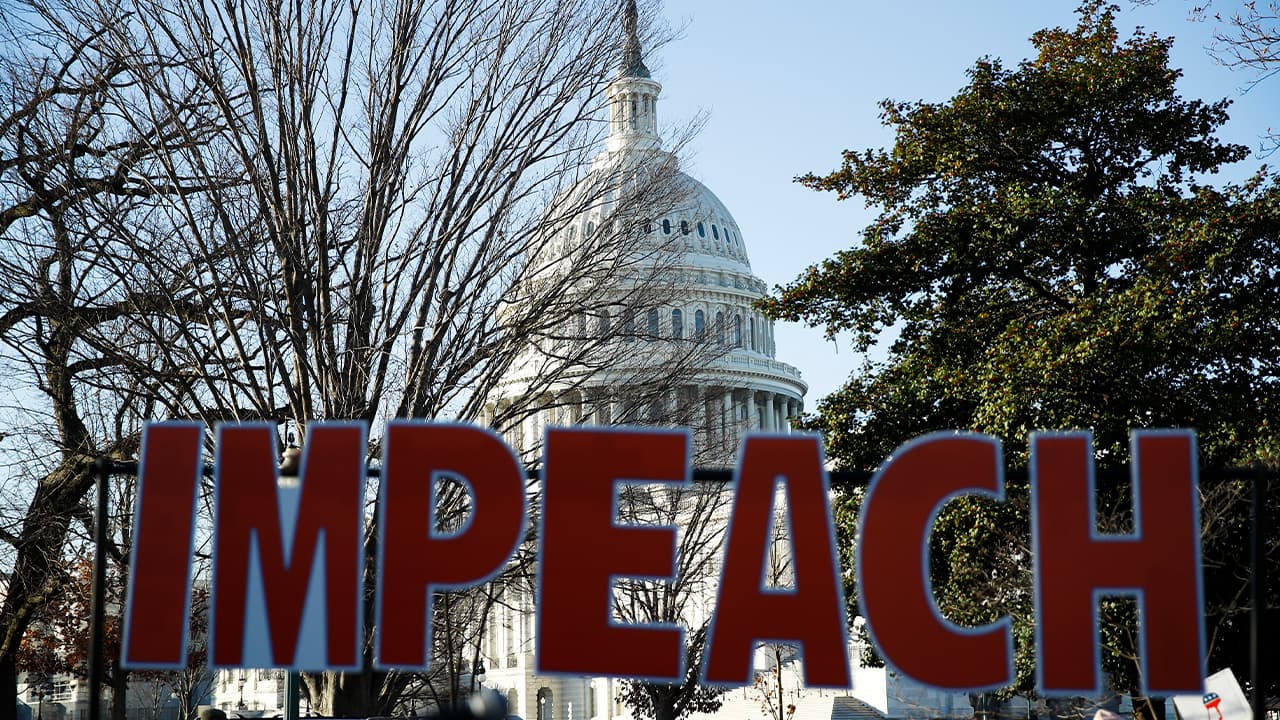 WASHINGTON — The U.S. House pressed toward its historic votes to impeach President Donald Trump on Wednesday, arguing over the charges he faces and the legitimacy of the probe that brought Congress and the day that will leave a lasting mark on his tenure at the White House.
Speaker Nancy Pelosi, who arrived at the back of the chamber as the day long session was underway, has the Democratic votes needed to make Trump just the third U.S. president to be impeached, exercising what she called “one of the most solemn powers granted to us by the Constitution.”

“This is a democracy defining moment,”said Rep. Jim McGovern, D-Mass., the chairman of the Rules Committee, as the proceedings began. “This is about protecting our democracy.”
Democrats overwhelmingly approved the rules for the debate, 228-197, with just two defections from Pelosi’s ranks, an early indication of how the votes will eventually fall on the articles of impeachment.
No Republicans supported the procedural vote, but Democrats picked up backing from Rep. Justin Amash, the Michigan conservative, who left the GOP this year to become an independent over his support for impeachment.
Trump tweeted his outrage: “Can you believe that I will be impeached today by the Radical Left, Do Nothing Democrats, AND I DID NOTHING WRONG! A terrible thing.”
The rare undertaking to impeach a president, set to unfold over more than six hours of debate, has split the lawmakers in Congress much the way Americans have different views of Trump’s unusual presidency and the articles of impeachment against him. Final votes were expected late in the evening. Republicans Tried, and Failed, to Halt What One Called the ‘Unfair, Rigged’ Process

According to a tally compiled by The Associated Press, Trump was on track to be formally charged by a House majority. No Republicans were expected to vote for impeachment as the president’s party stands firmly with Trump, and the Senate, where the GOP has the majority, is expected to acquit him in a trial next year.

The president, who is expected to depart later for a rally in the election battleground state of Michigan, fired off a furious letter to Pelosi on Tuesday d enouncing the “vicious crusade” against him but acknowledging he was powerless to stop the expected outcome.
Trump implores Americans to “read the transcript,” but the facts of his July phone call with the Ukraine president were largely confirmed by witnesses in the impeachment inquiry. Trump asked Volodymyr Zelenskiy to investigate Democrats and his 2020 political rival Joe Biden. At the time, the newly elected Ukraine leader was hoping for a coveted White House visit to showcase his standing with the U.S., his country’s most important ally. He was also counting on nearly $400 million in military aid as his country confronts a hostile neighbor, Russia.
The question for lawmakers, and Americans, is whether those actions, and the White House’s block on officials testifying for the House investigation, are impeachable offenses.
Republicans swiftly started offering the first of several procedural motions expected during the day to halt or delay the proceedings. “So we can stop wasting America’s time on impeachment, I move that the House do now adjourn,” said Rep. Andy Biggs, R-Ariz., the chairman of the conservative House Freedom Caucus. It was defeated on a party-line vote. Then Republicans then tried to force a vote condemning the actions of Democratic committee leaders, based on objections to the way the Democrats conducted hearings leading to Wednesday’s votes. That also went nowhere on a party-line vote.
Minority Leader Kevin McCarthy, R-Ca.,, suggested that Republicans çould try to undo the vote someday. “Maybe a future Congress would even expunge this vote,” he told Fox News, deriding the months-long impeachment proceedings as the quickest in history. Portraying Himself as a Blameless Victim

From Alaska to Florida, tens of thousands of Americans marched in support of impeachment Tuesday evening, from a demonstration through a rainy Times Square to handfuls of activists standing vigil in small towns. They carried signs saying “Save the Constitution – Impeach!!!!” and “Criminal-in-Chief.”
Trump appeared to intend his lengthy, accusatory message less for Pelosi than for the broad audience of citizens — including 2020 voters — watching history unfolding on Capitol Hill.
He accused the Democrats of acting out of “Trump Derangement Syndrome,” still smarting from their 2016 election losses. “You are the ones bringing pain and suffering to our Republic for your own selfish, personal political and partisan gain,” he wrote.
Portraying himself as a blameless victim, as he often does, Trump compared the impeachment inquiry to the “Salem Witch Trials.” Asked later if he bore any responsibility for the proceedings, he said, “No, I don’t think any. Zero, to put it mildly.”
But the House impeachment resolution says that Trump abused the power of his office and then tried to obstruct the investigation in Congress like “no other” president in history. ”President Trump, by such conduct, has demonstrated that he will remain a threat to national security and the Constitution if allowed to remain in office,” it says.
Centrist Democratic lawmakers, including many first-term freshmen who built the House majority and could risk their reelection in districts where the president is popular, have announced they would vote to impeach.

Senate Majority Leader Mitch McConnell set the partisan tone for the next step, as attention will shift to the Senate which, under the Constitution, is required to hold a trial on the charges. That trial is expected to begin in January.


“Impeachment is a political decision. The House made a partisan political decision to impeach. I would anticipate we will have a largely partisan outcome in the Senate. I’m not impartial about this at all.” — Senate Majority Leader Mitch McConnell
“I’m not an impartial juror,” McConnell declared. The Republican-majority chamber is all but sure to acquit the president.
Lawmakers crossing party lines face consequences. One freshman Democrat, Jeff Van Drew of New Jersey, is indicating he will switch parties to become a Republican after opposing impeachment. Earlier this year, Michigan conservative Rep. Justin Amash left the GOP when he favored impeachment.


Related Story: Liberty and Law Are Under Attack Worldwide. Consider the Impeachment Crisis in ...

One new Democrat congressman, Jared Golden of Maine, said he would vote to impeach on abuse of power but not obstruction.
Hoping to dispatch with lengthy Senate proceedings, McConnell rejected Senate Democrats’ push for fresh impeachment testimony and made a last-ditch plea that House Democrats “turn back from the cliff” of Wednesday’s expected vote.
“Impeachment is a political decision,” McConnell said. “The House made a partisan political decision to impeach. I would anticipate we will have a largely partisan outcome in the Senate. I’m not impartial about this at all.”
McConnell’s remarks Tuesday effectively slammed the door on negotiations for a deal proposed by the Democratic leader, Sen. Chuck Schumer, who wants to call top White House officials for the Senate trial. The U.S. Capitol building, center, and part of the Washington Monument, right, are seen at sunrise, Wednesday, Dec. 18, 2019, on Capitol Hill in Washington. President Donald Trump is on the cusp of being impeached by the House, with a historic debate set Wednesday on charges that he abused his power and obstructed Congress ahead of votes that will leave a defining mark on his tenure at the White House. (AP Photo/Julio Cortez)