WASHINGTON — Democrats propelled President Donald Trump’s impeachment toward a historic vote by the full U.S. House as the Judiciary Committee on Friday approved charges of abuse of power and obstruction of Congress. It’s the latest major step in the constitutional and political storm that has divided Congress and the nation.

“The President looks forward to receiving in the Senate the fair treatment and due process which continues to be disgracefully denied to him by the House.” — Trump’s press secretary, Stephanie Grisham

The House is expected to approve the two articles of impeachment next week, before lawmakers depart for the holidays.

The partisan split in the committee vote — 23 Democrats to 17 Republicans — reflects the atmosphere in Congress. The Democratic-majority House is expected to approve the charges against Trump next week, but the Republican-controlled Senate is likely to acquit him after a January trial.

Trump is accused, in the first article, of abusing his presidential power by asking Ukraine to investigate his 2020 rival Joe Biden while holding military aid as leverage, and, in the second, of obstructing Congress by blocking the House’s efforts to probe his actions.

“Today is a solemn and sad day,” Chairman Jerrold Nadler, D-N.Y., told reporters after the session, marking the third time in U.S. history the panel had voted to recommend impeaching a president. He said the full House would act ”expeditiously.”‘

After the milestone votes, Trump’s press secretary, Stephanie Grisham, labeled the proceedings a “desperate charade” and said, “The President looks forward to receiving in the Senate the fair treatment and due process which continues to be disgracefully denied to him by the House.”

Minutes After the Morning Session Opened, It Was Gaveled Shut

Voting was swift and solemn, with none of the fiery speeches and weighty nods to history that defined the previous two days of debate, including 14 hours that stretched nearly to midnight Thursday. Nadler abruptly halted that rancorous session so voting could be held in daylight, for all Americans to see.

Nadler, who had said he wanted lawmakers to “search their consciences” before casting their votes, gaveled in the landmark but brief morning session at the Capitol.

Lawmakers responded “aye” or “yes” for the Democrats, and simple: “no’s” from the Republicans.

“The article is agreed to,” Nadler declared after each vote.

The top Republican on the panel Rep. Doug Collins of Georgia immediately said he would file dissenting views.

Minutes after the morning session opened, it was gaveled shut.

Trump is only the fourth U.S. president to face impeachment proceedings and the first to be running for reelection at the same time. The outcome of the eventual House votes pose potentially serious political consequences for both parties ahead of the 2020 elections, with Americans deeply divided over whether the president indeed conducted impeachable acts and if it should be up to Congress, or the voters, to decide whether he should remain in office. 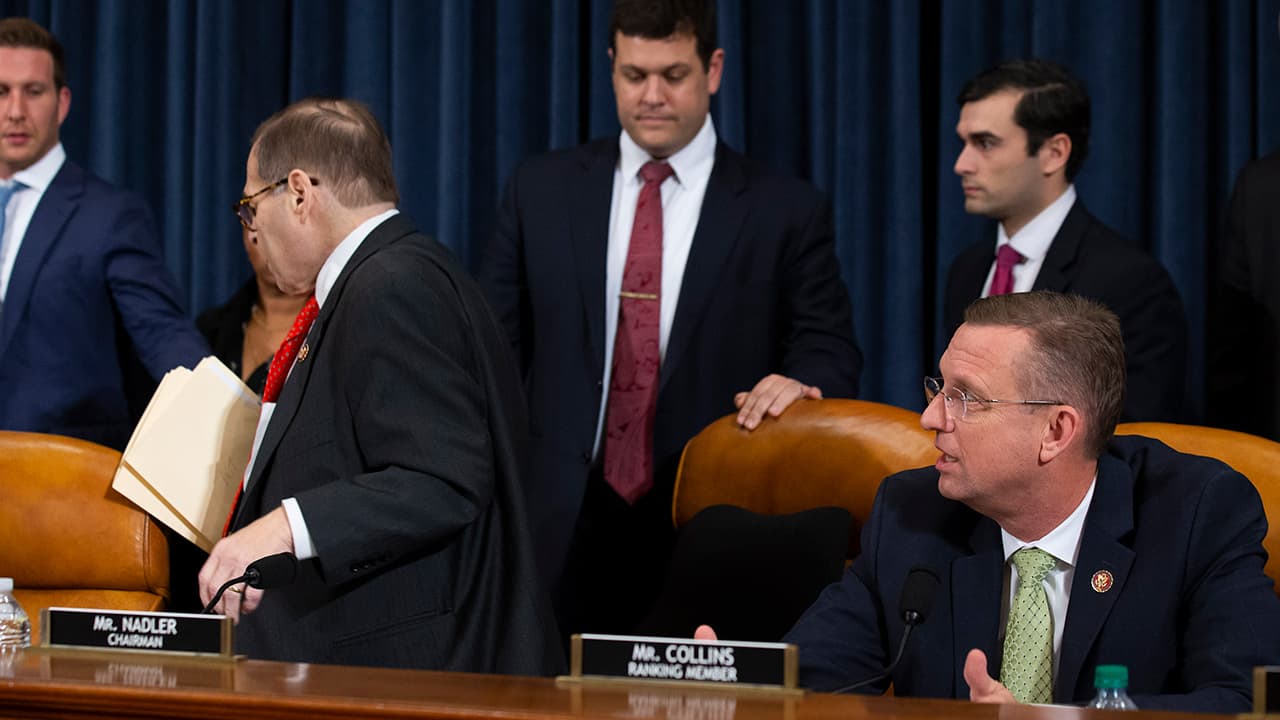 House Judiciary Committee Chairman Rep. Jerrold Nadler, D-N.Y., left, leaves as ranking member Rep. Doug Collins, R-Ga., seated right, speaks after adjournment following a marathon debate during a markup of the articles of impeachment against President Donald Trump, on Capitol Hill, Thursday, Dec. 12, 2019, in Washington. The House Judiciary Committee abruptly postponed a historic vote, shutting down a divisive 14-hour session that dragged with sharp partisan divisions but has been expected to end with the charges being sent to the full House for a vote next week. (AP Photo/Alex Brandon)

The President Has Refused to Participate in the Proceedings

The president took to Twitter early Friday to praise the panel’s Republicans as “warriors.” After the vote he said at the White House that Democrats were making fools of themselves, describing the proceedings as he often does: “a witch hunt,” “scam,” and ”hoax.”

The president has refused to participate in the proceedings, tweeting criticisms as he did Thursday from the sidelines, mocking the charges against him in the House’s nine-page resolution as “impeachment light.” But House Speaker Pelosi said the president was wrong and the case against him is deeply grounded.

Trump insisted anew that when he asked Ukraine to “do us a favor’,’ in the July phone call that sparked impeachment, he was referring to the U.S., not a political favor for himself. He derided the government officials who testified that he pressured Ukraine and claimed he was benefiting politically from impeachment.

The president has refused to participate in the proceedings, tweeting criticisms as he did Thursday from the sidelines, mocking the charges against him in the House’s nine-page resolution as “impeachment light.” But House Speaker Pelosi said the president was wrong and the case against him is deeply grounded.

Democrats contend that Trump has engaged in a pattern of misconduct toward Russia dating back to the 2016 election campaign that special counsel Robert Mueller investigated. And they say his dealings with Ukraine have benefited its aggressive neighbor Russia, not the U.S., and he must be prevented from “corrupting” U.S. elections again and cheating his way to a second term next year.

“It is urgent,” Pelosi said.

But Senate Majority Leader Mitch McConnell said late Thursday on Fox News, “There is zero chance the president will be removed from office.” He said he was hoping to have no GOP defections in the Senate trial next year.

Giuliani Showed Up at the White House on Friday

The Judiciary Committee session drew out over two days, much of time spent in fights over amendments.

Rep. David Cicilline, D-R.I., argued there was “overwhelming evidence” that the president with his lawyer Rudy Giuliani, in pushing Ukraine to investigate rival Biden, was engaged in an abuse of power “to corrupt American elections.″

Bringing even more attention to the situation, Giuliani showed up at the White House on Friday. Just back from Ukraine, hei was expected to brief Trump on his search for information. Many GOP lawmakers are trying to ignore Giuliani, blaming him for Trump’s predicament.

“My vote is no,” said Rep. Louie Gohmert, R-Texas. Then, before the tally was announced, he inquired how his vote was recorded by the clerk. “I want to make sure.” 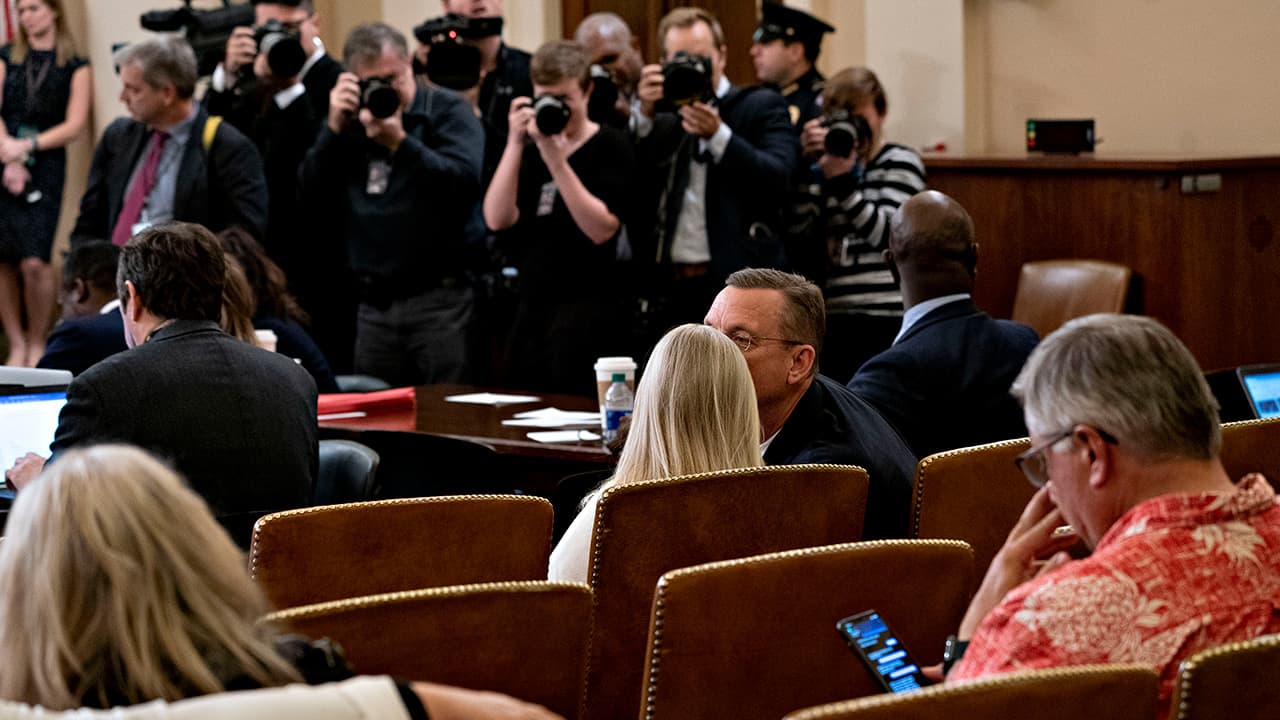 Debate Over Amendments Had Dragged on With Familiar Arguments

Nadler said late Thursday night, after presiding over the two-day session, “I want the members on both sides of the aisle to think about what has happened over these past two days and to search their consciences before they cast their final votes.”

The Republicans on the panel, blindsided by the move to Friday, were livid. When Nadler announced it, they started yelling “unbelievable” and “they just want to be on TV.” Congress was to be out of session on Friday, and many lawmakers had other plans, some outside Washington.

“This is the kangaroo court that we’re talking about” stormed Rep. Doug Collins of Georgia, the top Republican on the panel, who said he had not been consulted on the decision.

Debate over amendments had dragged on with familiar arguments: Democrats cited evidence they said showed Trump’s misconduct, while Republicans insisted the entire investigation was bogus. Typical was the first amendment, offered by GOP Rep. Jim Jordan of Ohio, who tried to delete the first charge against Trump. “This amendment strikes article one because article one ignores the truth,” he declared.

Rep. David Cicilline, D-R.I., argued there was “overwhelming evidence” that the president with his lawyer Rudy Giuliani, in pushing Ukraine to investigate rival Biden, was engaged in an abuse of power “to corrupt American elections.″

It was defeated, 23-17, on a party line vote, as were all the others that followed.