Their goal: To protect communities such as Redwood Estates, where giant redwoods loom over the houses of tech workers who live in the wooded community just 20 miles from the heart of Silicon Valley. With California’s increasingly warm, dry and overgrown landscape, wildfire has become a perpetual danger.

Among the most important tools the state has against fires is to mimic their effects: thinning trees and brush by hand to reduce the amount of vegetation that would become fuel in a fire, and using controlled burns to keep undergrowth and shrub lands in check.

State lawmakers committed more than $200 million annually to fire prevention efforts and Gov. Gavin Newsom wants to spend even more, motivated by infernos such as one last year that killed 85 people in the town of Paradise, some who died in their cars while trying to flee.

Yet officials say efforts to make areas such as this road corridor in Northern California more fire safe are undercut by property owners who refuse to let fire crews work on their property. Offered the choice between clearing vegetation-choked areas or retaining greenery that acts as a shield against the din of the nearby highway, a small minority opted for privacy over safety or said they’d do the work themselves.

That means patches of low-lying shrubs and some thickets of trees will remain when the job wraps up next year. As a result, future fires will retain potential avenues to spread into residential areas and threaten people and property. 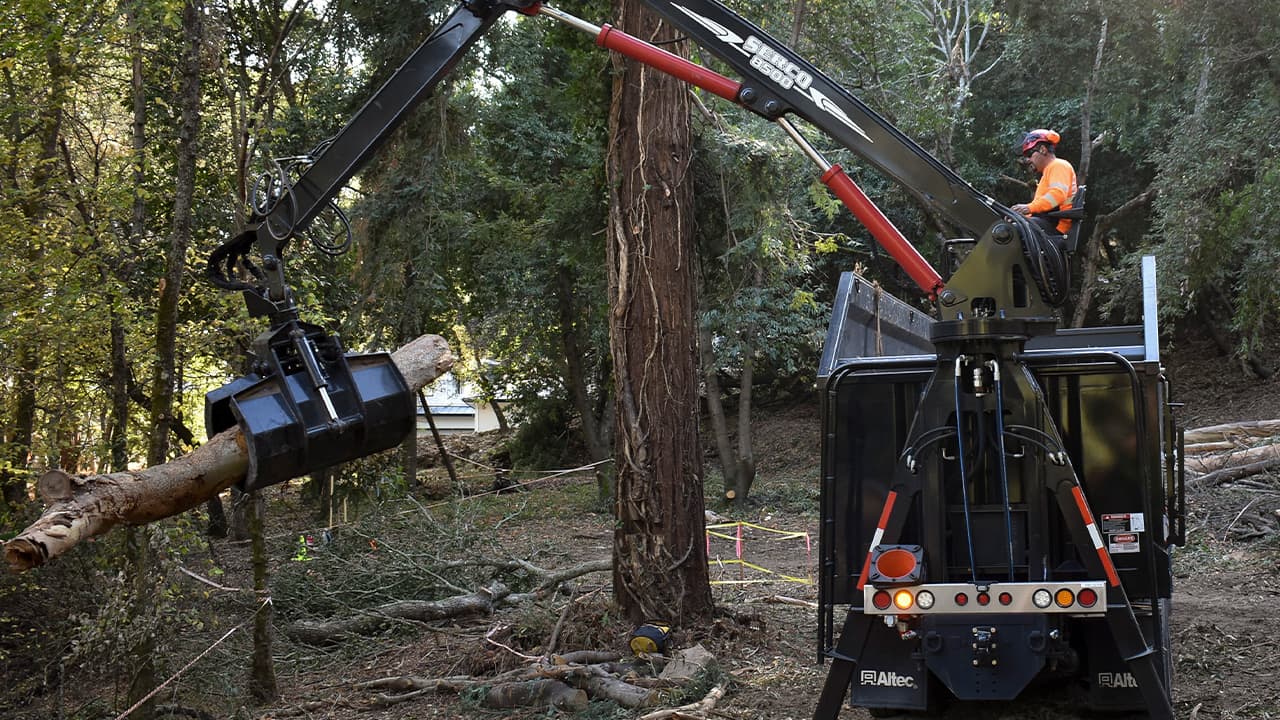 An employee of ArborWorks loads eucalyptus logs onto a truck after a stand of the highly-flammable trees was removed as part of wildfire prevention efforts on Wednesday, Nov. 20, 2019, near Holy City, Calif. Climate change and decades of lax land management practices put the U.S. West on a collision course with out-of-control wildfires. (AP Photo/Matthew Brown)

“It’s a chink in the armor,” said Ed Orre, division chief with Cal Fire, the state’s firefighting and fire prevention agency. “If that property catches fire, then you get a chain-reaction, domino effect… It compromises the effectiveness of the entire project.”

“It’s a chink in the armor. If that property catches fire, then you get a chain-reaction, domino effect… It compromises the effectiveness of the entire project.” — Ed Orre, division chief with Cal Fire, the state’s firefighting and fire prevention agency

Climate change and decades of lax land management practices put the U.S. West on a collision course with out-of-control wildfires, and authorities are now rushing to limit the potential damage from blazes that threaten year-round.

Since 1970, the amount of land burned each year in California has increased five-fold. Across the 11 western states, acreage burned annually has doubled since 1984. Over the past three years, fires have killed 149 people and destroyed almost 25,000 homes across the state.

California is now nearly 3 degrees warmer than in 1990 due to climate change, with hotter temperatures during the Golden State’s long dry season removing moisture from plants and soils, said Park Williams, a climate scientist at Columbia University.

“I see the recent wildfires as a tidal wave — it’s going to be very hard to stop that,” Williams said.

Many of the Community’s Original Cabins Are Gone

Some common but non-native plants — including eucalyptus trees, cheatgrass and pernicious shrubs such as French and Scotch broom — burn more readily than native species.

Although it’s not feasible to manually thin all the forests and shrub land in California, targeted efforts to remove flammable vegetation in areas of high human activity can effectively reduce the chance of major fires.

“If we’re going to do field treatment, we have to do it where it matters most — where people live and work,” Balch said.

The changes in climate and development are on display Redwood Estates, which was conceived in the 1920s as a vacation community, an escape from the city where families could weekend in small cabins in the Santa Cruz Mountains.

A promotional film from the community’s early days reveals that much of the surroundings were once bare of trees, due to logging and the use of the land for ranching and vineyards.

Today those same views are largely blocked by thick stands of redwoods, oak and eucalyptus.

Many of the community’s original cabins are gone, replaced by larger single-family homes that in some cases push right up to the property line. That leaves little space between houses and the forest, meaning embers could easily leap from house to house in a fire.

Much of the surrounding land is also private, and real estate development grew unchecked for much of the past century. The area has a long history of large wildfires, yet the land on which Redwood Estates sits has not burned since the 1800s, said Jeff Bates, a lifelong resident of and manager for the local homeowners association. 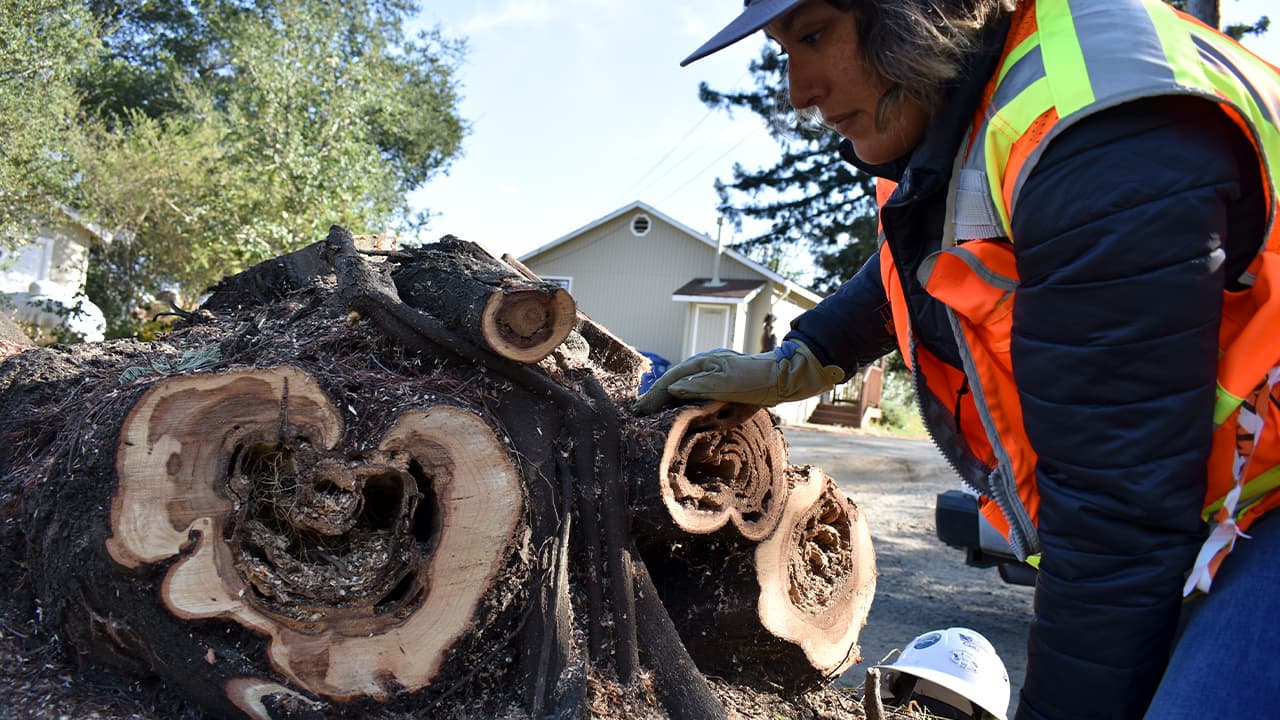 Biologist Jessica Gonzalez marks a tree stump where a San Francisco dusky-footed woodrat was found after workers cut down the tree as part of fire prevention efforts along a crowded highway corridor on Wednesday, Nov. 20, 2019, near Redwood Estates, Calif. (AP Photo/Matthew Brown)

Route 17, which gets about 80,000 vehicles daily and is flanked by hundreds of homes, is the only direct way into or out of the area. Given the highway’s high traffic volume and frequent backups, a quick escape from an approaching fire is unlikely. Bates said a county emergency official told him that in the event of a major fire, “You folks are on your own.”

The most important prevention strategy is education — teaching people about what starts accidental fires, and how to minimize them. They recommend avoiding highly flammable materials for roofs and decks, and not planting fire-prone non-native species.

While lightning strikes can start wildfires, today more than 95% in California are started by people — mostly accidentally. Fires are sparked by downed power lines, campfires, mechanical equipment such as chainsaws, and even hot vehicle exhaust pipes touching dry grass.

Managing the risk of wildfires isn’t only the job of firefighters, say experts.

The most important prevention strategy is education — teaching people about what starts accidental fires, and how to minimize them. They recommend avoiding highly flammable materials for roofs and decks, and not planting fire-prone non-native species.

Yet these steps won’t entirely keep the flames away.

“California is in the fire sweet spot,” said Williams, the climate scientist. “Some big fires are probably inevitable.”