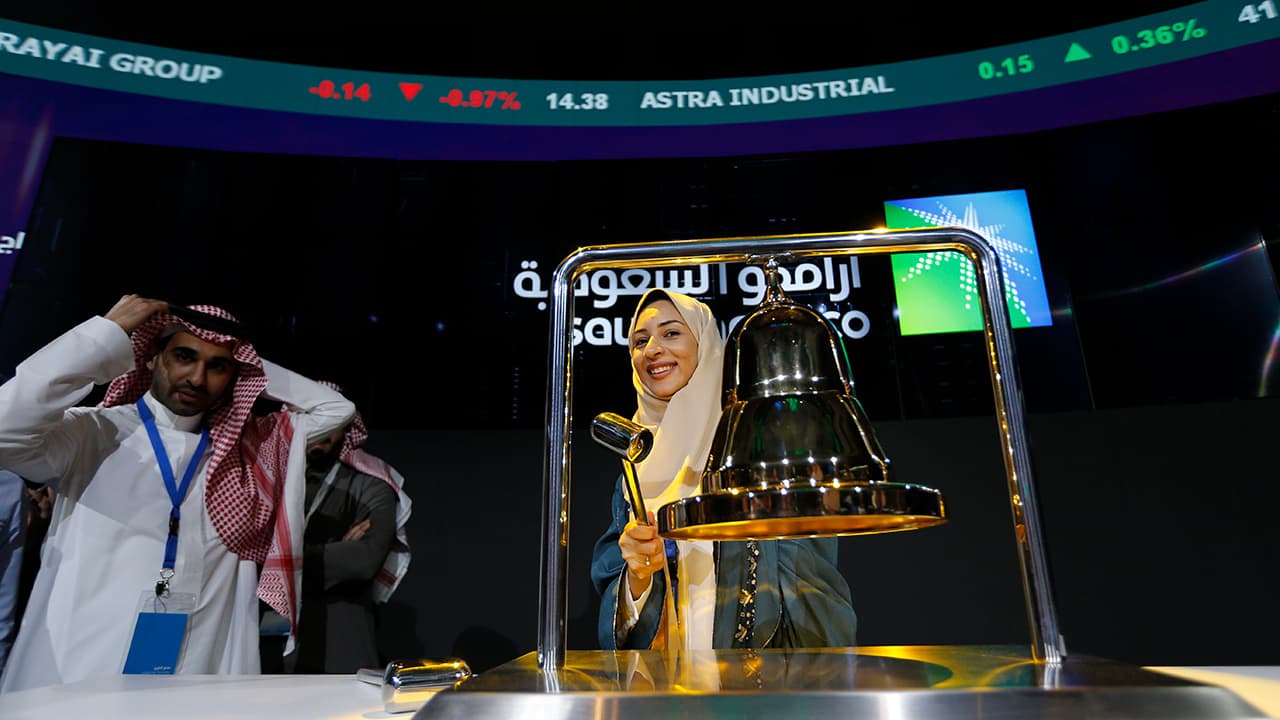 RIYADH, Saudi Arabia — Saudi Arabian oil company Aramco surpassed Apple as the world’s most valuable public company Wednesday when its shares made their debut on the Saudi stock exchange, part of an ambitious shift away from the very fossil fuels the country’s economy depends on.


“A local Saudi offering is, by all accounts, a friendly audience of Saudi investors.” — Gianna Bern, the author of ‘Investing in Energy’ and lecturer at the University of Notre Dame
The shares’ 10% rally brought state-owned Aramco’s value to $1.88 trillion. The 1.5% of the company that is listed has raised $25.6 billion, a record for an initial public offering. As of Tuesday’s close in the U.S., Apple was valued at $1.19 trillion.

Despite the success of the sale, the kingdom’s decision not to list the company on a larger foreign exchange points to concerns that a global flotation would raise. Listing shares outside Saudi Arabia would open up the company to greater disclosure rules and expose it to foreign laws at a time when the country is under scrutiny for its role in regional conflicts as well as for the killing of a dissident journalist.
“A local Saudi offering is, by all accounts, a friendly audience of Saudi investors,” said Gianna Bern, the author of “Investing in Energy” and lecturer at the University of Notre Dame. She said the real test for Aramco will be a global offering, in another jurisdiction, such as London or Asia. Aramco, however, has said it will not sell more shares for at least another year.
Wednesday’s shares were sold mainly to investors in the region: a 0.5% stake to individual retail investors in Gulf Arab states and 1% to institutional investors.
Non-Saudi investors contributed just 23% of the institutional investment generated in the IPO, according to lead adviser Samba Capital. Saudi companies and government institutions raised 51% of the overall demand, Samba Capital said. The Sale Raises Capital for the Public Investment Fund

Some analysts said that the surge on the first day of trading suggests heavy buying from investors close to the crown prince to make the operation a hit.
Crown Prince Mohammed bin Salman plans to use the money raised from the sale of a sliver of the kingdom’s crown jewel to diversify the country’s economy and fund major national projects that create jobs for millions of young Saudis entering the workforce.
The sale raises capital for the Public Investment Fund overseen by Prince Mohammed, but it is only part of a much larger transformation program to move the economy away from reliance on oil exports for revenue.
The share sale also has been an exercise in national prestige, with the 34-year-old crown prince looking for the flotation to value Aramco at $2 trillion.
Zachary Cefaratti, chief executive officer of Dalma Capital, which manages Saudi equity funds that invested in Aramco, said the company could on day two of trading become the first in the world valued at over $2 trillion if the stock gains another 10%.
The shares rose sharply in the first moment of trading Wednesday to hit the 10% limit on stock price fluctuation allowed by Saudi regulators. That pushed the price to 35.2 riyals, or $9.39 a share, where it held until closing at 3 p.m.

The Kingdom’s Reputation Has Been Stained

The $2 trillion value was considered too high for many international investors, particularly as global oil prices are under pressure from rising production in other countries, especially the United States, and amid a global push toward renewable energy.

Still, Aramco remains an attractive investment locally. It was the most profitable company in the world last year, earning $111 billion in net income
Aramco, which has exclusive rights to produce and sell the kingdom’s energy reserves, was founded in 1933 with America’s Standard Oil Co. before becoming fully owned by Saudi Arabia four decades ago. In this Oct. 25, 2018, photo, candles, lit by activists, protesting the killing of Saudi journalist Jamal Khashoggi, are placed outside Saudi Arabia’s consulate, in Istanbul, during a candlelight vigil. (AP File Photo/Lefteris Pitarakis)

To encourage Saudi citizens to buy and keep hold of Aramco stock, the company says it will pay a dividend to shareholders of at least $75 billion. Saudi citizens who hold their shares for six months from the first day of trading can also receive up to 100 bonus shares, or one for every 10 held. The government also made it easier to access credit for Saudis to buy stock.
The result was that just over 5 million individuals, nearly all of them Saudi nationals out of a population of around 20 million citizens, generated subscriptions of $13 billion.
With oil prices hovering around $63 a barrel, the kingdom needs a break-even oil price of $87 a barrel to balance its budget and climb out of deficit, according to Monica Malik, chief economist at Abu Dhabi Commercial Bank.
One of the biggest expenditures is government salaries for the millions of Saudis who work in the public sector. Aramco’s flotation helps generate billions of dollars to invest in projects that benefit private businesses and keep unemployment from rising beyond current levels of roughly 12%.
In the lead-up to the flotation, there had been a strong push for Saudis, including princes and businessmen, to contribute to what’s seen locally as a moment of national pride, and even duty.
A brief ceremony as trading started on Wednesday saw a countdown in Arabic, the sounding of a bell, a light show with music and applause all around. At the celebration at the Fairmont hotel in Riyadh, Aramco Chairman Yasir Al-Rumayyan, described the sale as “a proud and historic moment for Saudi Aramco and our majority shareholder, the kingdom.”