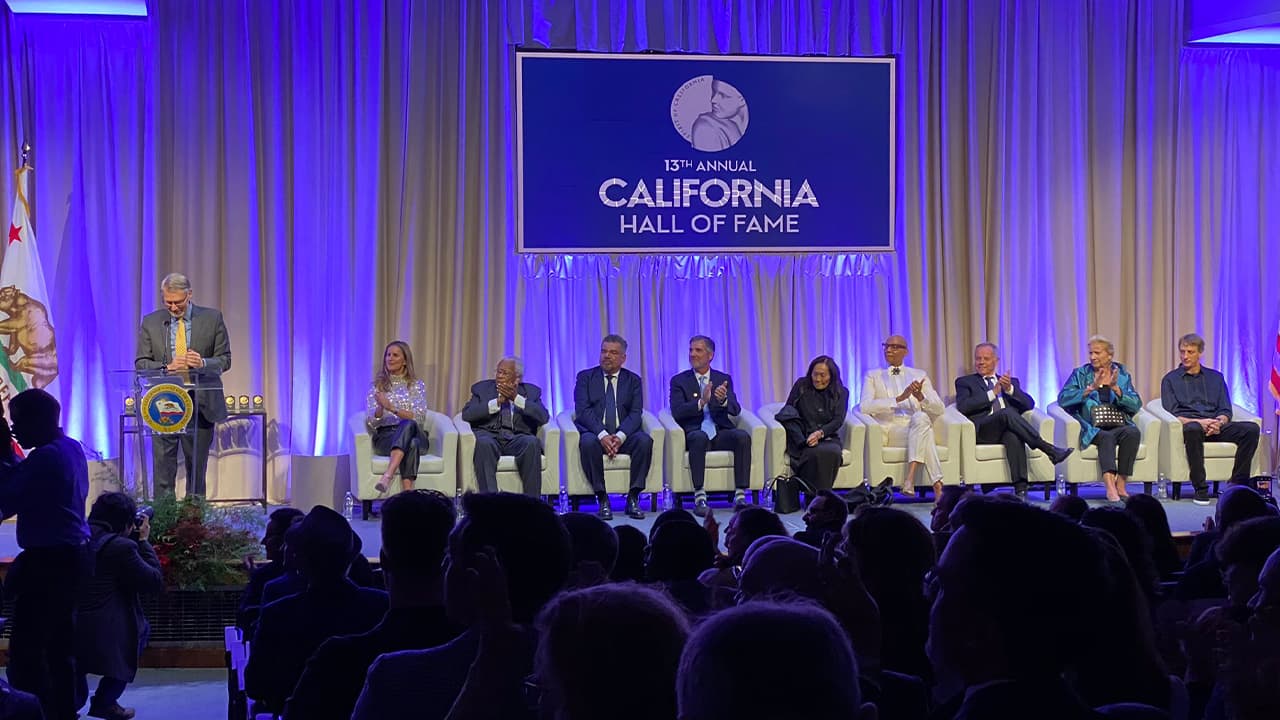 Hawk did a few turns on his skateboard on a half-pipe erected outside the California Museum, where the event was held.
“It’s a huge honor,” Hawk said. “When I started skating a long time ago, it was the furthest thing from cool. It was not something you chose as a career.””
“I’m a very proud Californian. All my dreams were born here, they were fulfilled here,” Chastain said, noting that she used to drive two hours each way from San Jose to play for the Sacramento Storm women’s soccer team.
Cordova’s brother accepted her medal. She offered her thanks in a video from Antarctica, where she was preparing to head to the South Pole.
Gov. Gavin Newsom and his wife, Jennifer Siebel Newsom, chose the 13th class of inductees into the Hall of Fame, which started in 2006.

RuPaul and Hawk Both Were Born and Raised in San Diego

“We love to say about our state, ‘the future happens here first. We’re America’s coming attraction,” the governor said, calling the inductees examples of that spirit.
RuPaul and Hawk both were born and raised in San Diego. Chastain was born in San Jose. Lopez was born in Los Angeles.
RuPaul, wearing a white suit and a sparkling brooch in place of a tie, called the event “lovely and beautiful.”
His parents emigrated to California from Louisiana and RuPaul said he was proud to continue the spirit of trailblazing that led many people to the state.
Angelou was an internationally known poet, lecturer, actor, producer and civil rights activist who lived in California at various times — she once was employed as a San Francisco cable car conductor. She died in 2014 at 86.
Her son, Guy Johnson, said that as a boy, he thought of Angelou as a troublemaker because she was always getting blackballed or fired for “speaking up when she saw unfairness and injustice around her.”
“She would take me aside and warn me about the insidious qualities of racism and prejudice and then tell me to always fight against the prison of ignorance,” he said.

‘This Is the Greatest Place Politically’

Lawson, 91, was a key strategist and coordinator for peaceful civil rights protests in the 1960s, which led to his being expelled from Vanderbilt University although he later returned to teach there. Lawson moved to Los Angeles in 1974 and was pastor of Holman United Church until 1999. Houston is best known for her “Farewell to Manzanar,” a memoir about her experiences as a young girl in a California internment camp for Japanese Americans during World War II.
Houston compared the racism directed against Japanese Americans to some current views on minorities.
“Today, there are all too many politicians and irresponsible media who find scapegoats to blame for the country’s problems and more and more I think, those scapegoats are immigrants,” she said.
Lopez mentioned growing up during a grape boycott by Latino farmworkers and made a reference to current immigrant labor.
“This is the greatest place politically,” he said. “This country does not run without the labor of Latinos and I would say to anybody: ‘Do not bite the hand that feeds you.’”
Cordova attended high school in the Los Angeles suburb of La Puente and went on to Stanford University. She also is a one-time chancellor of the University of California, Riverside.
Puck arguably rose to success with the opening of his Southern California restaurant Spago in 1982. He currently lives in Los Angeles.
Turley is an award-winning vintner and owner of Marcassin Vineyard in Sonoma County.
Related Topics:California Hall of FameGov. Gavin NewsomJennifer Siebel NewsomMaya AngelouRuPaulskateboardingTony Hawk
Up Next