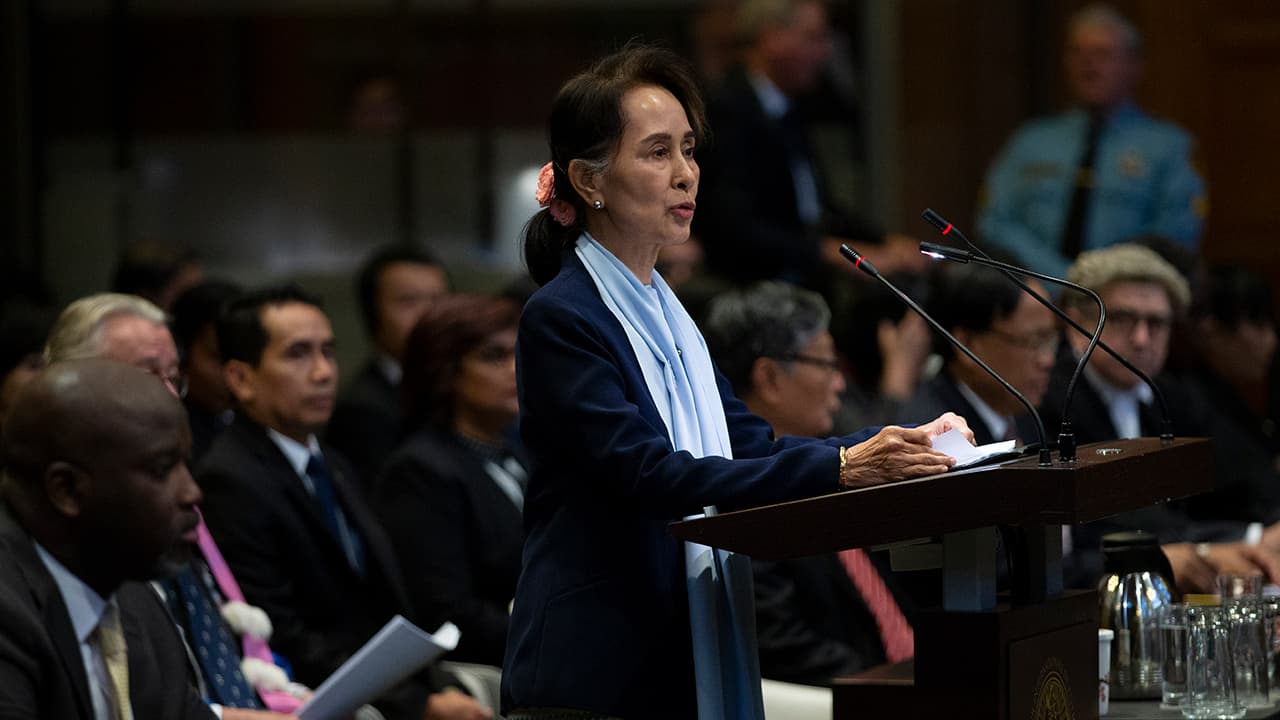 THE HAGUE, Netherlands — Nobel Peace Prize winner and former political prisoner Aung San Suu Kyi denied Wednesday that Myanmar’s armed forces committed genocide, telling the United Nation’s top court that the mass exodus of Rohingya people from the country she leads was the unfortunate result of a battle with insurgents.

The image of the former pro-democracy icon appearing before the International Court of Justice to defend the army that kept her under house arrest for 15 years was striking. Suu Kyi, who as Myanmar’s state counselor holds an office similar to prime minister, was awarded the 1991 peace prize in absentia for championing democracy and rights under the nation’s then-ruling junta.
Myanmar’s accusers have described a deliberate campaign of ethnic cleansing and genocide that drove more than 700,000 Rohingya to neighboring Bangladesh.
Addressing the world court in The Hague in her additional role as Myanmar’s foreign minister, Suu Kyi calmly refuted allegations that army personnel killed civilians, raped women and torched houses in 2017.
She said the allegations stemmed from “an internal armed conflict started by coordinated and comprehensive armed attacks … to which Myanmar’s defense services responded. Tragically, this armed conflict led to the exodus of several hundred thousand Muslims.” Yasmin Ullah, center, and other representatives of the Rohingya community take their seats for “Right of Reply” after two days of hearings at the International Court of Justice in The Hague, Netherlands, Wednesday, Dec. 11, 2019. Myanmar leader Aung San Suu Kyi defended Myanmar Wednesday and denied genocide accusations against the Rohingya Muslim minority in a case filed by Gambia at the ICJ, the United Nations’ highest court. (AP Photo/Peter Dejong)

Gambia Alleges That Genocide Occurred and Is Still Ongoing

Rohingya representatives and rights group said they were appalled by Suu Kyi’s testimony.

Suu Kyi said the armed forces had tried “to reduce collateral damage” during fighting in 12 locations. Conceding that excessive force might have been used and that one helicopter may have killed “non-combatants,” she said Myanmar is investigating what happened and should be allowed to finish its work.

“Can there be genocidal intent on the part of a state that actively investigates, prosecutes and punishes soldiers and officers who are accused of wrongdoing?” she asked the court.
Rights groups joined Rohingya representatives in slamming the claims Suu Kyi and Myanmar’s legal team made in The Hague.
George Graham, humanitarian advocacy director at Save the Children, said Suu Kyi’s remarks “fly in the face of all the evidence gathered by the U.N., and the testimony our own teams have heard from countless survivors.”
“Rohingya families have faced patterns of unimaginable horrors in a campaign of violence. Children and their parents have been systematically killed, maimed and raped,” he said, adding that “the government of Myanmar has failed at every turn to punish those responsible.” Supporters of Myanmar’s leader Aung San Suu Kyi hold and wear her picture outside the International Court of Justice on the second day of three days of hearings in The Hague, Netherlands, Wednesday, Dec. 11, 2019. Aung San Suu Kyi will represent Myanmar in a case filed by Gambia at the ICJ, the United Nations’ highest court, accusing Myanmar of genocide in its campaign against the Rohingya Muslim minority. (AP Photo/Peter Dejong)

Amnesty International’s Nicholas Bequelin, accused Suu Kyi of trying to downplay the severity of crimes committed against the Rohingya and “wouldn’t even refer to them by name or acknowledge the scale of the abuses. Such denials are deliberate, deceitful and dangerous.”