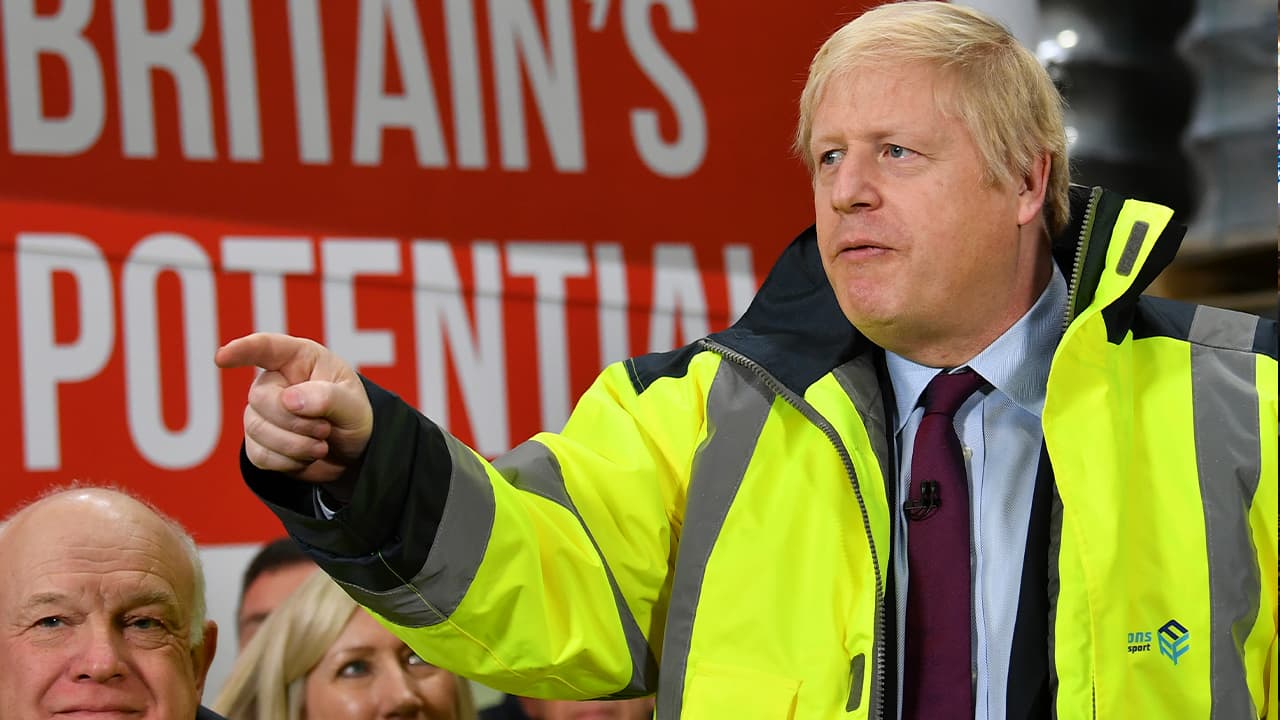 LONDON — With two days until Britain’s election, Prime Minister Boris Johnson’s final push to drive home his key message about Brexit was overshadowed Tuesday by criticism of his ham-fisted response to the image of a sick child sleeping on a hospital floor and allegations that he exploited a terrorist knife attack for political gain. Britain’s Prime Minister Boris Johnson sits in the cab to break through a symbolic wall with the Conservative Party slogan ‘Get Brexit Done’, during an election campaign event at the JCB manufacturing facility in Uttoxeter, England, Tuesday Dec. 10, 2019. The Conservative Party are campaigning for their Brexit split with Europe ahead of the UK’s General Election on Dec. 12. (Stefan Rousseau/PA via AP)

Opinion Polls Give the Conservatives a Lead Over Labour

He said the family had not been contacted by Johnson or his office since the attack, although Johnson’s office said “the PM has expressed his deepest condolences to Mr. Merritt for his tragic loss – an experience no family should have to go through.”
Johnson, meanwhile, tried to focus voters on the prospect of an uncertain result and a divided Parliament, which would endanger his plan to lead Britain out of the European Union on Jan 31.
All 650 seats in the House of Commons seats are up for grabs in the election, which is being held more than two years early in a bid to break the political impasse over Brexit.
Opinion polls give the Conservatives a lead over Labour, but all parties are nervous about the verdict of a volatile electorate that is weary after years of wrangling over Brexit.
“Polls can be wrong,” Johnson said Tuesday. “We need to be fighting for every vote.”
He accuses Labour of offering more “dither and delay” on Brexit. The opposition party says it will negotiate a new divorce deal with the EU and then give voters a choice between leaving on those terms and remaining in the bloc.
“Forty-eight hours from now, our country can choose between going forward, punching through the current deadlock … or we can remain stuck in neutral,” Johnson said during a visit to a construction equipment factory in central England, where he drove a bulldozer through a plastic foam wall with “Gridlock” written on it.

Merritt’s interview was another late hurdle in a campaign that had gone smoothly for Johnson, until a newspaper ran a photo of 4-year-old Jack Williment-Barr sleeping on the floor of the Leeds General Infirmary as he awaited treatment because no bed was free. The opposition Labour Party led by Jeremy Corbyn painted the boy’s plight as a symptom of Britain’s ailing health system, which has suffered under years of Conservative government austerity measures.

A video of the prime minister briefly declining to look at a cellphone photo of Jack on a journalist’s phone — and then placing the phone in his pocket — has been viewed more than 1 million times.
The incident quickly became caught up in a storm of social media claims, counterclaims and conspiracies.
Several prominent journalists, including the political editors of the BBC and ITV, tweeted a claim by anonymous Conservative officials that a party worker had been punched by a protester while Britain’s health secretary visited the hospital.
When footage emerged showing that no assault had taken place, they apologized — but a media storm was already raging.
Some social media users circulated claims that the photo of Jack, first published by the Yorkshire Evening Post, was staged. Editor James Mitchinson tweeted his reply to one such reader, explaining how the newspaper had verified the story.
“I would be happy to meet you over a coffee to offer you an explanation as to how sophisticated and corrosive the proliferation of fake news is, and what to do to guard against being conned by it,” he wrote. Britain’s Electoral Laws, Like Those of Most Countries, Were Written Before the Dawn of the Internet

Young Jack later was diagnosed with tonsillitis and flu, and eventually sent home.
The controversy about the photo comes amid a campaign marred by misleading social media images and attack ads.