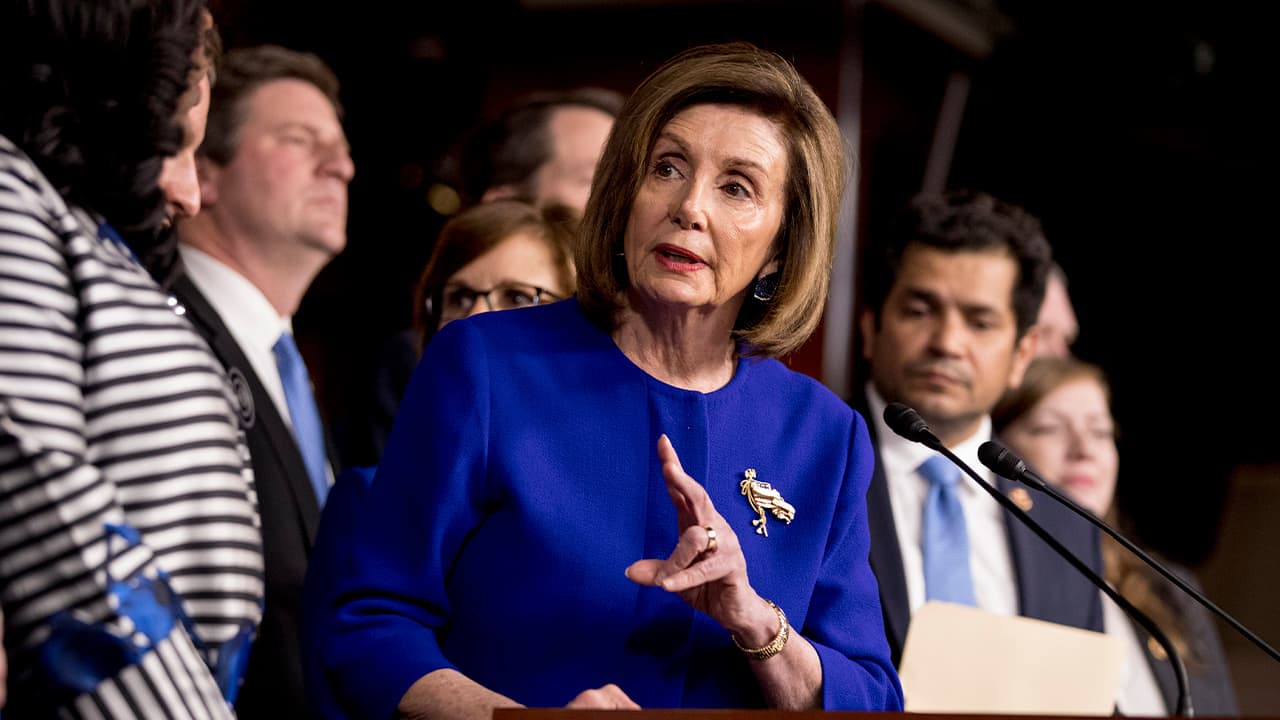 WASHINGTON — House Speaker Nancy Pelosi on Tuesday announced agreement on a modified North American trade pact, handing President Donald Trump a major Capitol Hill win on the same day that Democrats announced their impeachment charges against him.
The California Democrat said the revamped U.S.-Mexico-Canada Agreement is a significant improvement over the original North American Free Trade Agreement, crediting Democratic negotiators for winning stronger provisions on enforcing the agreement.
“There is no question of course that this trade agreement is much better than NAFTA,” Pelosi said in announcing the agreement, saying the pact is “infinitely better than what was initially proposed by the administration.”
Trump said the revamped trade pact will “be great” for the United States.
“It will be the best and most important trade deal ever made by the USA. Good for everybody – Farmers, Manufacturers, Energy, Unions – tremendous support. Importantly, we will finally end our Country’s worst Trade Deal, NAFTA!,” the president said in a tweet.

America’s great USMCA Trade Bill is looking good. It will be the best and most important trade deal ever made by the USA. Good for everybody – Farmers, Manufacturers, Energy, Unions – tremendous support. Importantly, we will finally end our Country’s worst Trade Deal, NAFTA!

Rep. TJ Cox (D – Fresno) applauded the announcement in a news release.
“I hear every day about how market uncertainty has made it nearly impossible for family farms to make ends meet,” Cox said. “International trade has changed dramatically since NAFTA’s signing in 1994. I’m proud that the agreement we’re unveiling develops a framework for 21st century trade and shows multilateral agreements can bring shared prosperity.”
In Mexico City, Mexican Foreign Relations Secretary Marcelo Ebrard said Monday night that there would be a meeting of the three countries’ negotiating teams Tuesday “to announce the advances achieved” on the trade agreement. U.S. Trade Representative Robert Lighthizer is slated to appear.

Pelosi Has Negotiated With the Administration Extensively

The announcement came on the same morning that Democrats outlined impeachment charges against Trump. The pact is Trump’s top Capitol Hill priority along with funding for his long-sought border fence.
Vice President Mike Pence, a foot soldier in the administration’s campaign to sell the accord, said Pelosi had “acquiesced” in slating the pact for a vote this year. Weeks of back-and-forth, closely monitored by Democratic labor allies such as the AFL-CIO, have brought the two sides together. Pelosi is a longtime free trade advocate and supported the original NAFTA in 1994. Trump has accused Pelosi of being incapable of passing the agreement because she is too wrapped up in impeachment.
The original NAFTA badly divided Democrats but the new pact is more protectionist and labor-friendly, and Pelosi is confident it won’t divide the party, though some liberal activists took to social media to carp at the agreement.
“There is no denying that the trade rules in America will now be fairer because of our hard work and perseverance. Working people have created a new standard for future trade negotiations,”said AFL-CIO President Richard Trumka. “President Trump may have opened this deal. But working people closed it.”
Business groups like the U.S. Chamber of Commerce also chimed in to support the long-delayed agreement.
“We are optimistic this development will open the door to final approval of USMCA on a bipartisan basis by the end of the year, which will especially benefit American farmers, manufacturers, and small businesses,” Thomas Donohue, CEO of the U.S. Chamber of Commerce, said in a statement.

“This agreement has been the result of painstaking bipartisan negotiations over the past year, and would not have been possible if not for the willingness of President Trump to work patiently with Democrats to get something done that he knew was in the best interests of American workers, farmers and manufacturers,” said Sen. Rob Portman, R-Ohio, a former U.S. trade representative.