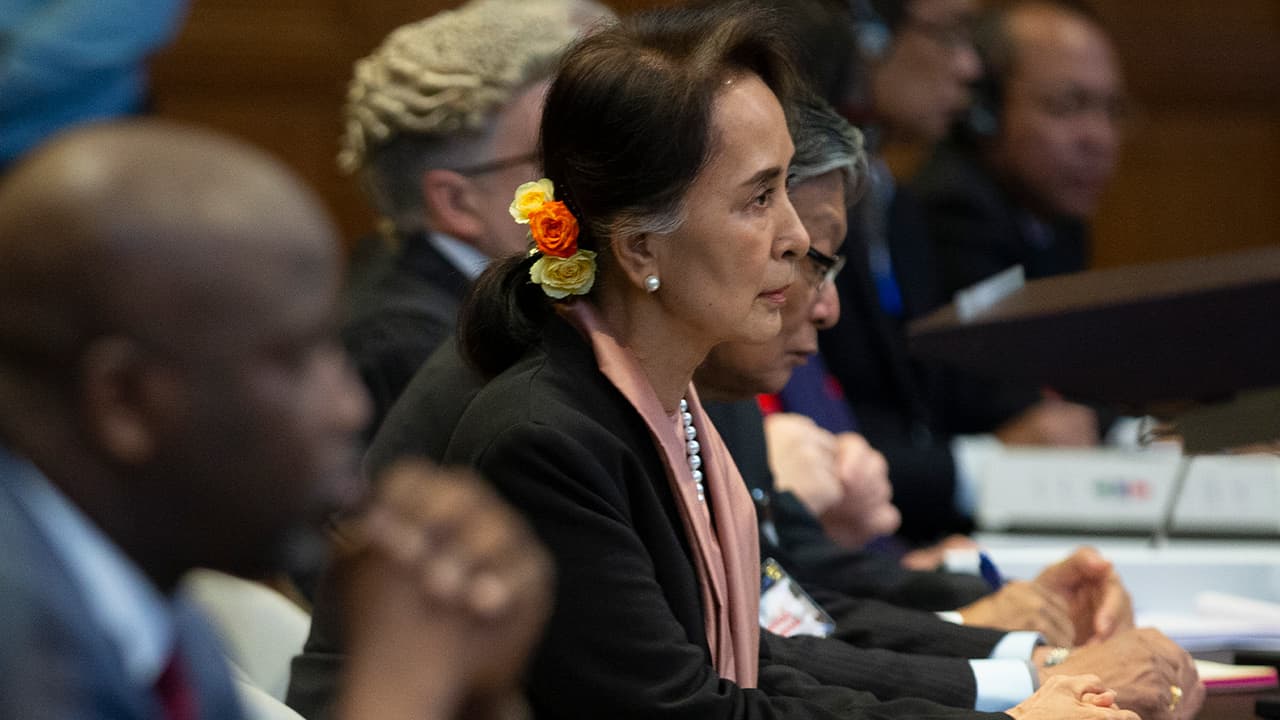 THE HAGUE, Netherlands — Twenty-eight years to the day after Aung San Suu Kyi’s husband and sons accepted her Nobel Peace Prize while she remained under house arrest in Myanmar, the former pro-democracy icon appeared in a United Nations court ready to defend her country’s army from allegations of committing genocide against the Rohingya minority.


“It is indeed sad for our generation that 75 years after human kind committed itself to the words ‘never again’, another genocide is unfolding right before our eyes. Yet we do nothing to stop it.” — Justice Minister Aboubacarr Tambadou
Suu Kyi looked on attentively from the front bench at the International Court of Justice in The Hague Tuesday as a legal team for Gambia detailed accounts of killings – including of women and children – sexual violence and the destruction of tens of thousands of Muslim minority homes in northern Rakhine state.

Acting on behalf of the 57-country Organization of Islamic Cooperation, Gambia is asking the world court to take “all measures within its power to prevent all acts that amount to or contribute to the crime of genocide.”
Opening Gambia’s case, Justice Minister Aboubacarr Tambadou urged the court to “tell Myanmar to stop these senseless killings, to stop these acts of barbarity that continue to shock our collective conscience, to stop this genocide of its own people.”
“It is indeed sad for our generation that 75 years after human kind committed itself to the words ‘never again’, another genocide is unfolding right before our eyes,” Tambadou said. “Yet we do nothing to stop it.”
“This is a stain on our collective conscience,” he said.
Myanmar’s army began a crackdown on the Rohingya in August 2017 in response to an insurgent attack. More than 700,000 Rohingya fled to neighboring Bangladesh to escape what has been called an ethnic cleansing campaign involving mass rapes, killings and the torching of homes. Journalists wait for Myanmar’s leader Aung San Suu Kyi to enter the court room of the International Court of Justice for the first day of three days of hearings in The Hague, Netherlands, Tuesday, Dec. 10, 2019. Aung San Suu Kyi will represent Myanmar in a case filed by Gambia at the ICJ, the United Nations’ highest court, accusing Myanmar of genocide in its campaign against the Rohingya Muslim minority. (AP Photo/Peter Dejong)

Detailing Graphic Accounts of Rape, Mutilation and the Killing of Children

The head of a U.N. fact-finding mission on Myanmar warned in October that “there is a serious risk of genocide recurring.” The mission also found that Myanmar should be held responsible in international legal forums for alleged genocide against the Rohingya.
Myanmar has strongly denied the charges but says it stands ready to take action against wrongdoers if there is sufficient evidence.
A statement on the website of the Ministry of the Interior said recently that the renewed international pressure on the country was due to a lack of understanding of “the complexities of the issue and the narratives of the people of Myanmar.”
Beyond detailing graphic accounts of rape, mutilation and the killing of children by soldiers in a three-hour presentation, Gambia’s representatives underscored what they said was Myanmar’s “ongoing genocidal intent” and the government’s continued incitement of racial hatred.
They said there is “overwhelming” evidence of genocide and they want steps taken to prevent “extrajudicial killings or physical abuse; rape or other forms of sexual violence; burning of homes or villages; destruction of lands and livestock, deprivation of food” and other acts “calculated to bring about the physical destruction of the Rohingya group in whole or in part.”
Scores of Rohingya supporters gathered outside the court behind a banner marked “Stop Genocide.” Some carried photos of Suu Kyi with “Shame” and “agent of the military” written under them.

In Myanmar, Hundreds of People Have Rallied

An extraordinary scene is set for Wednesday, when Suu Kyi – once a shining light for democracy and a global beacon of hope for human rights – is expected to defend the actions of the armed forces despite having spent 15 years under military-ordered house arrest.


As the crowd waved national flags and listened to music and poetry, a popular local singer told them “Mother Suu is the bravest human being in the world — her weapon is love.”
Suu Kyi, who was awarded the 1991 Nobel Peace Prize for championing democracy and rights under Myanmar’s then-ruling junta, is leading the Myanmar delegation in her capacity as foreign minister.
A group of seven Nobel peace prize winners has called on her “to publicly acknowledge the crimes, including genocide, committed against the Rohingya. We are deeply concerned that instead of condemning these crimes, Aung San Suu Kyi is actively denying that these atrocities even occurred. “

They wrote in a signed statement ahead of the hearing, which runs until Thursday, that “Aung San Suu Kyi must be held criminally accountable, along with her army commanders, for crimes committed.”
In Myanmar, hundreds of people have rallied to show support for her in recent days.
At one rally, around 700 people, including many members of Suu Kyi’s National League of Democracy party, gathered outside the colonial-era City Hall in Yangon, Myanmar’s largest city.
As the crowd waved national flags and listened to music and poetry, a popular local singer told them “Mother Suu is the bravest human being in the world — her weapon is love.”