Putin Sits Down With New Ukraine Leader for First Time 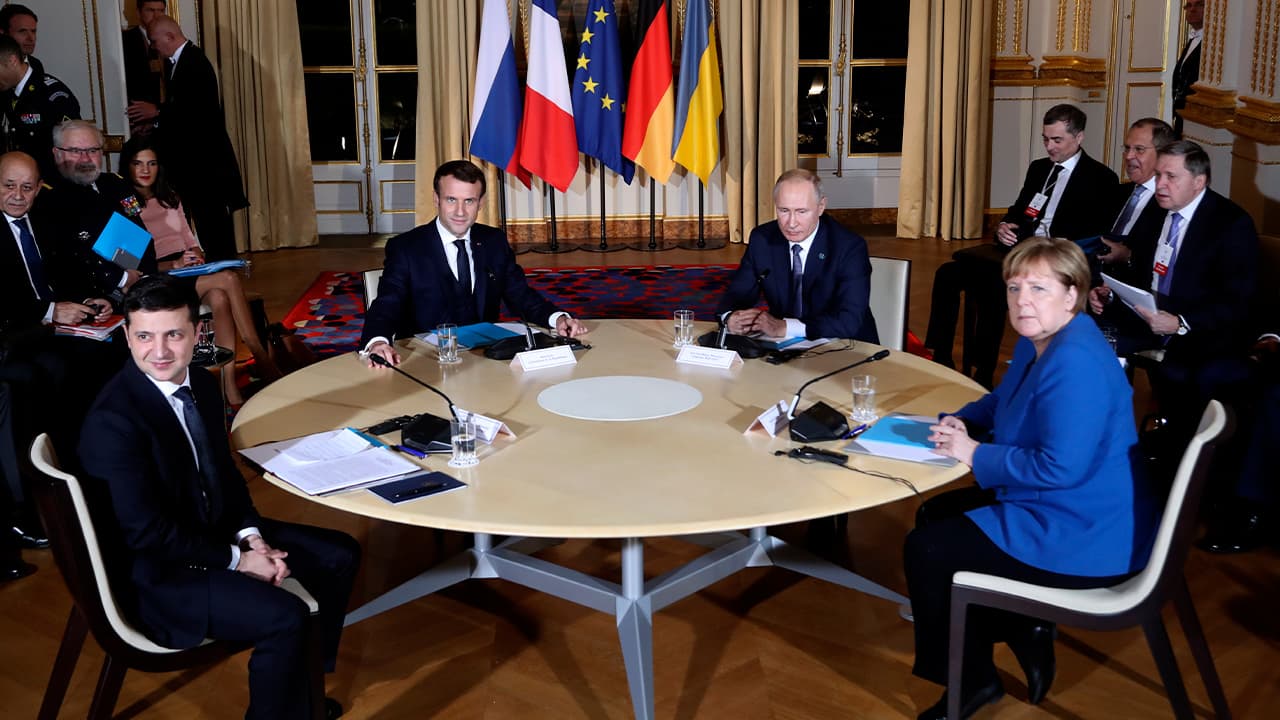 PARIS — Russian President Vladimir Putin and Ukrainian President Volodymyr Zelenskiy met for the first time Monday at a summit in Paris to try to end five years of war between Ukrainian troops and Russian-backed separatists.
Both leaders sat down at the French presidential palace along with the leaders of France and Germany for talks focused on reviving a 2015 peace agreement for eastern Ukraine that has largely stalled. The war has killed 14,000 people since 2014, emboldened the Kremlin and reshaped European geopolitics, and Zelenskiy in particular is keen for it to end.
A major breakthrough is unlikely, and Ukrainian protesters in Kyiv are heaping pressure on Zelenskiy not to surrender too much to Putin at their first face-to-face meeting.
But the fact that Putin and Zelenskiy met at all was a significant step after years of war. Putin and Zelenskiy faced each other across the table, flanked by French President Emmanuel Macron and German Chancellor Angela Merkel. Putin and Zelenskiy are expected to hold a separate one-on-one meeting later.
Whatever happens, the summit is the biggest test yet for Zelenskiy, a comic actor and political novice who won the presidency this year in a landslide — partly on promises to end the war.
The 2015 peace agreement helped to reduce the intensity of the fighting but Ukrainian soldiers and Russia-backed separatists have continued to exchange fire across World War I-style trenches along a front line that slices through eastern Ukraine.
While Zelenskiy still enjoys broad public support, he has been embarrassed by the scandal around his discussions with U.S. President Donald Trump that have unleashed an impeachment inquiry in Washington. The U.S. is an important military backer for Ukraine, which is hugely out-gunned by Russia. French President Emmanuel Macron, right, welcomes Russian President Vladimir Putin wave at the Elysee Palace Monday, Dec. 9, 2019 in Paris. A long-awaited summit in Paris is aiming to find a way to end the war in Ukraine, after five years and 14,000 lives lost in a conflict that has emboldened the Kremlin and reshaped European geopolitics. (AP Photo/Thibault Camus)

Some Ukrainians Fear Zelenskiy Will Be out-Maneuvered by Putin

While the U.S. was never part of this peace process, U.S. backing has strengthened Ukraine’s overall negotiating position vis-a-vis Russia in the past. Now that support is increasingly in doubt, after the Trump administration froze military aid earlier this year and is increasingly focused on Trump’s re-election bid. With U.S. influence waning around the world, many in Kyiv see one clear winner: Russia.

Russia Denies Providing Troops and Weapons to Help the Separatists

But with progress stalled, the leaders haven’t met since 2016. Monday’s summit is the first involving Zelenskiy and Macron, who has sought to improve relations with Russia.
To pave the way for the talks in Paris, Ukraine and Russia struck a prisoner exchange deal in September and agreed on a troop and heavy weapons pullback from two locations in eastern Ukraine. Russia has also released three Ukrainian navy ships that were seized a year ago.
Zelenskiy said he hopes they will help achieve a lasting cease-fire and a deal to exchange all prisoners held by the warring parties.
Russia denies providing troops and weapons to help the separatists, but has maintained political support and sent aid. It argues that people in eastern Ukraine feel stronger cultural and linguistic ties with Russia than with Western-leaning Kyiv.
Russia’s interior minister announced Monday that about 125,000 residents of rebel-controlled regions in eastern Ukraine have been given Russian passports since April. Putin issued a decree allowing residents of Ukraine’s Donetsk and Luhansk regions to apply for Russian citizenship under a simplified procedure. The move was condemned in Kyiv as the latest sign of Russian interference in Ukraine’s domestic affairs.
The Kremlin hopes that an end to the conflict could also lead to the eventual lifting of EU sanctions against Russia linked to the fighting, which European businesses have pushed for. The EU and U.S. imposed separate sanctions on Russia over its annexation of Ukraine’s Crimean Peninsula in 2014.
The EU is expected to extend sanctions this week by another six months. Arriving for meetings in Brussels on Monday, German Foreign Minister Heiko Maas said: “At the moment I see no grounds to change anything in the European Union’s sanctions policy toward Russia in this matter. It would be good if we could get there at some point.”

Saudi Gunman Tweeted Against US Before Naval Base Shooting