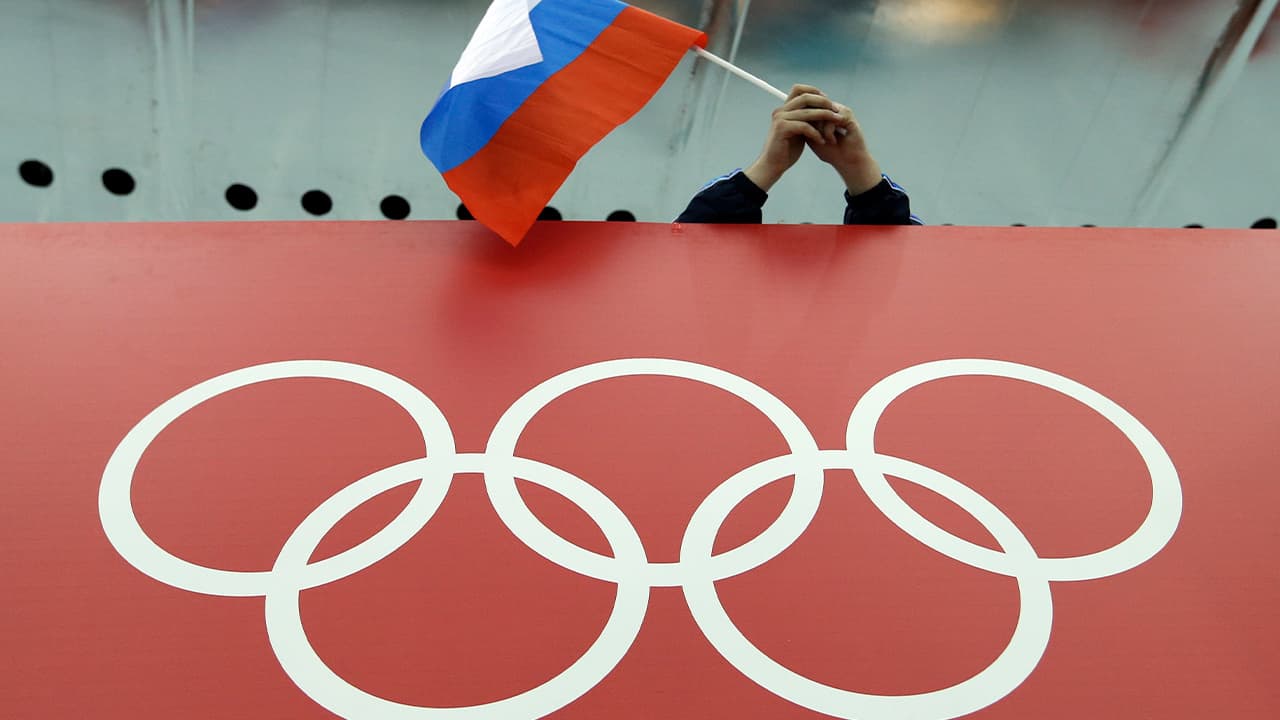 LAUSANNE, Switzerland — Russia was slapped Monday with a four-year ban from international sports events, including next summer’s Tokyo Olympics, over a longstanding doping scandal, although its athletes will still be able to compete if they can show they are clean competitors. FILE – In this Feb. 23, 2014 file photo Veleriya Obarevich, right, and Yan Shamilov carry a Russian flag with the message “Thank you, Putin!” written across it in Russian through Olympic Park ahead of the 2014 Winter Olympics closing ceremony in Sochi, Russia. The World Anti-Doping Agency banned Russia on Monday Dec. 9, 2019 from the Olympics and other major sporting events for four years, though many athletes will likely be allowed to compete as neutral athletes. (AP Photo/David Goldman, file)

The Latest Round of Sanctions Were Imposed Because of Tampering

Going forward, “they cannot use the name of the country in the name of the team,” WADA president-elect Witold Bańka told The Associated Press.
Legal fallout from the WADA ruling at CAS seems sure to dominate preparations for the Tokyo Olympics, which open July 24.
Russian Prime Minister Dmitry Medvedev urged sports organizations to appeal and said WADA’s ruling was “a continuation of this anti-Russian hysteria which has already become chronic.”
The latest round of sanctions were imposed because tampering with the Moscow data was a new violation of anti-doping rules committed as recently as January.
Handing over a clean database to WADA was a key requirement given to Russia 15 months ago to help bring closure to a scandal that has tainted the Olympics over the last decade.
WADA investigators and the IOC agreed that evidence showed Russian authorities corrupted data from the Moscow lab that was long sealed by security forces. Hundreds of potential doping cases were deleted and evidence falsely planted to shift the blame onto whistleblowers.
“Flagrant manipulation” of the data was “an insult to the sporting movement worldwide,” the IOC said last month.
Athletes whose data was manipulated in the 2012-15 testing period now face disciplinary cases by their sport’s governing body.

The Decision to Appeal Has Been Stripped From RUSADA Chief Executive

“Yes, we do know who those athletes are. They will be kept out of the (Tokyo) Games,” said British lawyer Jonathan Taylor, chairman of the WADA panel whose proposed sanctions were unanimously approved Monday. FILE – In this May 24, 2016, file photo, lab technicians work at Russia’s national drug-testing laboratory in Moscow, Russia. The Russians were running out of time. Experts from the World Anti-Doping Agency were heading to Moscow to finally receive the trove of data they’d been seeking for two years. Instead of getting ready to hand it over, Russian authorities stayed busy in a round-the-clock endeavor to keep changing, deleting and manipulating the data. Granular details of the plot are sprinkled throughout WADA’s previously confidential 89-page report, obtained by The Associated Press. Among the most brazen projects, the report says, was the rewriting of memos to make it look as though the man who exposed the plot was leveraging the Russian doping scheme to line his own pockets. (AP Photo/Alexander Zemlianichenko, File)

Russia has stuck to its claim that deceptive edits in the data were in fact made by WADA’s star witness, Grigory Rodchenkov. The former Moscow lab director’s flight into the witness protection program in the United States was the subject of an Oscar-winning documentary.
“As usual, Russia has disregarded all of its promises and obligations to clean sport,” Rodchenkov said Monday in a statement from his lawyers.
Sports fans worldwide will still be watching top-tier events from Russia in the next four years despite the hosting ban.
In soccer, St. Petersburg will still host four games at the 2020 European Championship and the 2021 Champions League final, because European soccer body UEFA is not bound by the ruling. Nor is the Formula 1 racing series, which goes to Sochi’s Olympic Park for a race each year.
“The contract is valid through 2025,” Russian Grand Prix spokeswoman Tatyana Rivnaya told the AP in a telephone interview.
World championships in lower-profile Olympic sports — including luge in two months and wrestling in 2022 — could stay in Russia due to legal difficulties moving them.
“There will be practical issues,” Taylor acknowledged, “and we can’t ignore those.”
However, Taylor said a block on Russia bidding for or being awarded sports events in the next four years would have a longer effect beyond the ban.

Related Topics:athletesInternationalpunishmentRussiasanctionsscandalSportsSwitzerlandTokyo Olympics
Up Next

Nunes' Reliably Red District Remains So, But Is Slipping