The records show that Parnas and Nunes were in frequent contact last April, when Giuliani was publicly calling for an investigation of Biden.

The report released Tuesday includes phone records obtained from AT&T and Verizon that show Giuliani also was in frequent contact with the White House and with Lev Parnas, a Giuliani associate who is under indictment on charges of using foreign money to make illegal campaign contributions. Prosecutors said the donations by Parnas and Igor Fruman, another Giuliani associate with Ukraine ties, were made while the men were lobbying U.S. politicians to oust the U.S. ambassador to Ukraine.

Giuliani, who has said he knew nothing about illegal campaign donations, was trying to get Ukrainian officials to investigate the son of Trump’s potential Democratic challenger, Joe Biden. Parnas and Fruman had key roles in Giuliani’s quest.

The records show that Parnas and Nunes were in frequent contact last April, when Giuliani was publicly calling for an investigation of Biden.

House Intelligence Chairman Adam Schiff, who sparred with Nunes during public impeachment hearings, said he was going to “reserve comment” on the Republican’s appearance in the report. But he added that, while Trump was “digging up dirt” on Biden, “there may be evidence that there were members of Congress who were complicit in that activity.”

Schiff said it may be the role of others to investigate further, but did not elaborate. 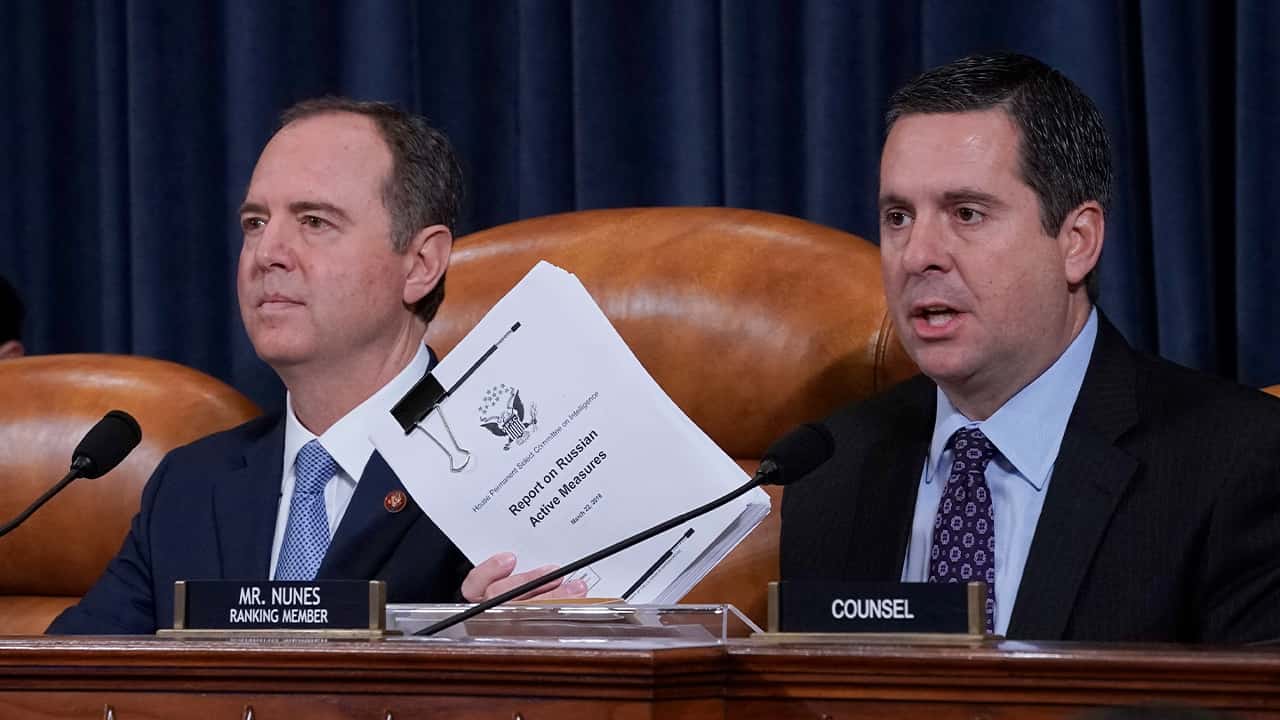 Rep. Devin Nunes, R-Tulare, the ranking member of the House Intelligence Committee, joined at left by Chairman Adam Schiff, D-Calif., holds up a document he is submitting as the panel prepares to listen to former White House national security aide Fiona Hill, and David Holmes, a U.S. diplomat in Ukraine, on Capitol Hill in Washington, Thursday, Nov. 21, 2019, during a public impeachment hearing of President Donald Trump’s efforts to tie U.S. aid for Ukraine to investigations of his political opponents. (AP Photo/J. Scott Applewhite)

‘Nunes Should Have Recused Himself From the Impeachment Hearings’

Joseph Bondy, a lawyer representing Parnas, said on Twitter that Nunes should have recused himself from the impeachment hearings. Parnas has been providing documents to the Intelligence committee in compliance with a subpoena, the report says.

Devin Nunes, you should have recused yourself at the outset of the #HIC #ImpeachingHearings. #LetLevSpeak https://t.co/HeG8kFEDwl

The report also shows extensive contact between Giuliani and the White House. On April 24, Giuliani had three phone calls with a number associated with the Office of Management and Budget, and eight calls with a White House number.

Nunes’ office did not immediately respond to a request for comment.

After Solomon published an article critical of Yovanovitch on April 7, phone records show numerous calls between Giuliani, Parnas, Nunes, and Solomon. For instance, on April 10, Giuliani and Nunes talked on three short calls in rapid succession, followed by a text message, and ending with a nearly 3-minute call. Later that day, Parnas and Solomon had a 4-minute, 39-second call.

The report also shows extensive contact between Giuliani and the White House. On April 24, Giuliani had three phone calls with a number associated with the Office of Management and Budget, and eight calls with a White House number.

One of Giuliani’s calls with the White House was 4 minutes, 53 seconds, and another was 3 minutes, 15 seconds. Later that night, the State Department phoned Yovanovitch and abruptly called her home because of “concerns” from “up the street” at the White House.