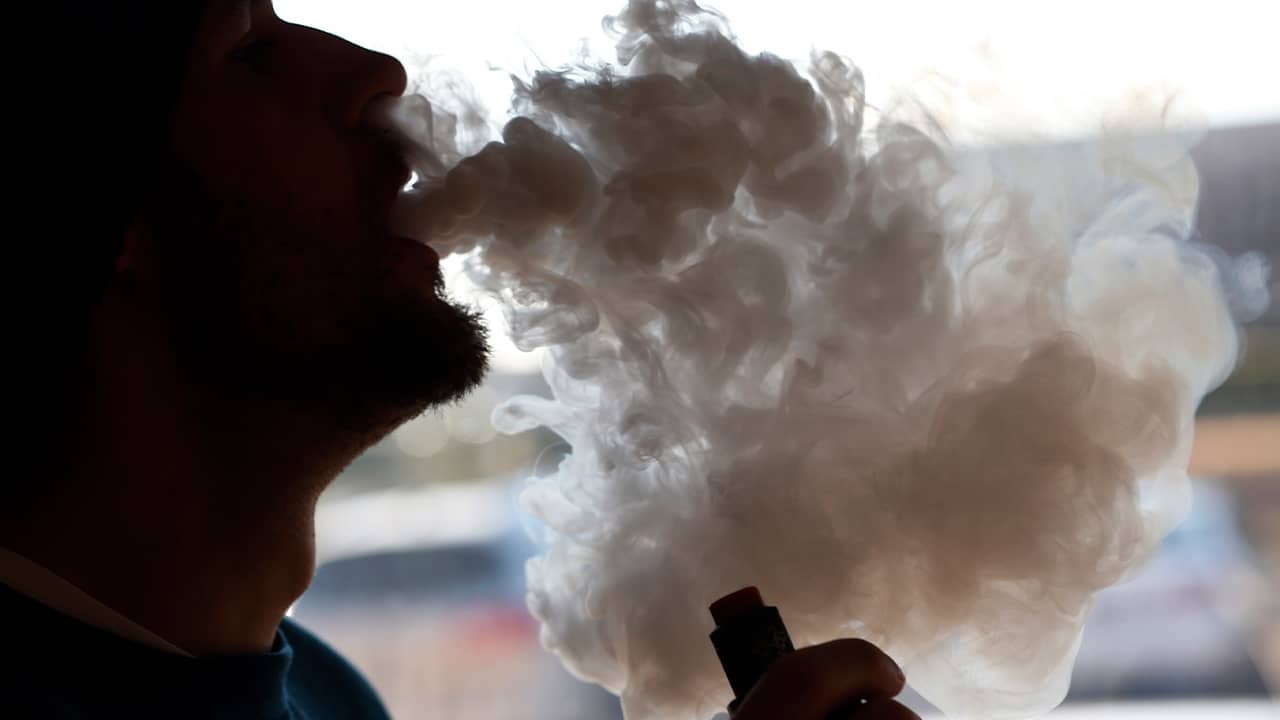 NEW YORK — As health officials scrutinize marijuana vaping, it’s increasingly on law enforcement’s radar, too.
From New York City to Nebraska farm country to California, authorities have seized at least 510,000 marijuana vape cartridges and arrested more than 120 people in the past two years, according to an Associated Press tally derived from interviews, court records, news accounts and official releases.

In states with and without legal marijuana markets, drug investigators, highway patrols and local police departments have been adjusting to searching for a form of marijuana that comes in small packages, doesn’t smell like pot and might look like legal nicotine vapes — or require discerning what’s legal and not in states that allow marijuana use.
California officials seized 7,200 cartridges in October from a Los Angeles warehouse tied to a state-licensed company that made Kushy Punch-brand vapes. The state later revoked the company’s license.
Kushy Punch has said the cartridges were old, unusable and not meant for distribution. The brand says it’s looking for new manufacturing partners.
Meanwhile, the Los Angeles County Sheriff’s Department Narcotics Bureau may soon start tallying vape seizures when busting allegedly illegal pot dispensaries, Capt. Holly Francisco said.
Vaping rapidly gained ground in the past few years among marijuana users as a fast-acting and discreet alternative to smoking the drug. Thirty-three states have legalized marijuana at least for medicinal use, but bootleg vape “carts” — short for cartridges — have cropped up there and elsewhere, selling for roughly $20 to $50 apiece.
The illicit marijuana vape market nationwide is estimated at as much as $2.5 billion this year — roughly equivalent to the market for legal pot cartridges, according to cannabis market researchers BDS Analytics and Arcview Market Research. 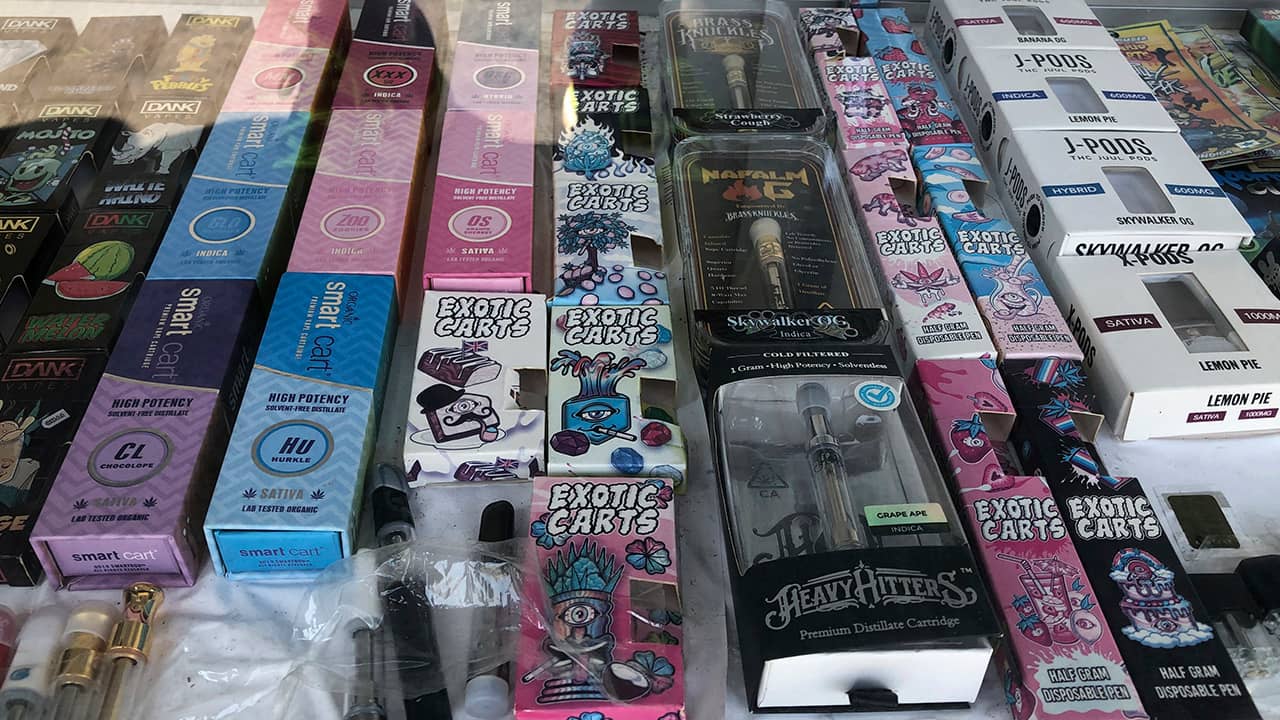 The lung-illness outbreak raised alarms about vaping as over 2,200 people fell ill and at least 47 died in the past nine months. Health officials have urged people to avoid vaping, particularly black-market products containing THC, which many of the sick said they had used.

Juvenile court pot vape possession cases have increased roughly threefold in the county in about a year, Rich said. Meanwhile, she’s prosecuting two people charged in September with marijuana trafficking after a seizure of 1,971 THC vapes shipped from California. Rich said they were labeled with such flavors as banana, tangelo and Girl Scout cookie.
In Minnesota, authorities have noted a sizeable rise in illicit THC cartridges over the last three or four years, according to Brian Marquart of the state Department of Public Safety.
“It’s been a challenge of training officers what to look for, what to do in their investigations, as well as educating the public as to what they may be purchasing if they’re purchasing on the street,” he said.
Minnesota allows medical marijuana sales, but like many states restricts them to registered patients and approved dispensaries.
Officers and prosecutors have had to ponder how criminal laws designed for plant-form marijuana apply to the small but concentrated cartridges, and how to sample as many as 77,000 of them for testing, Marquart said. That seizure, in the Twin Cities suburb of Coon Rapids, included “Dank” vapes, an underworld brand of sorts that has come up in the vaping illness investigation.
While some big busts stem from investigations and stings, others arise simply from traffic stops.

Pot Vapes Will Remain a Priority for Black-Market Suppliers

The Utah State Patrol has rolled up more than 39,000 THC cartridges this year. Indiana troopers said they netted 50,000 vapes, plus about 250 pounds (113 kilograms) of plant-form marijuana, in March after pulling over a truck near Indianapolis for a traffic infraction.
Indiana State Police spokesman Sgt. Matt Ames said THC cartridges have proliferated over the past year as neighboring Michigan and Illinois have agreed to legalize recreational weed.
“People are under the assumption now that marijuana is an accepted drug,” Ames said, but “we are going to enforce the law of Indiana.”
In New York City, a detective on a DEA-managed task force was staking out a Manhattan storage facility in July when he saw three men unload boxes from a truck, according to a court complaint. A search of the truck and a storage unit yielded 24,000 THC vapes and about 230 pounds (104 kg) of pot, according to the complaint and the DEA.
The men pleaded guilty this fall to felony marijuana possession and were sentenced to three years’ probation. One of their lawyers, Tony Mirvis, called it “a fair and equitable resolution” for his client.
The DEA’s Donovan expects pot vapes will remain a priority for black-market suppliers and the authorities who pursue them.
“That’s not going to go away,” he said.

Iran Says It Killed ‘Rioters’ in Deadliest Unrest in Decades

How the Gunfights in North Mexico That Left 23 Dead Unfolded