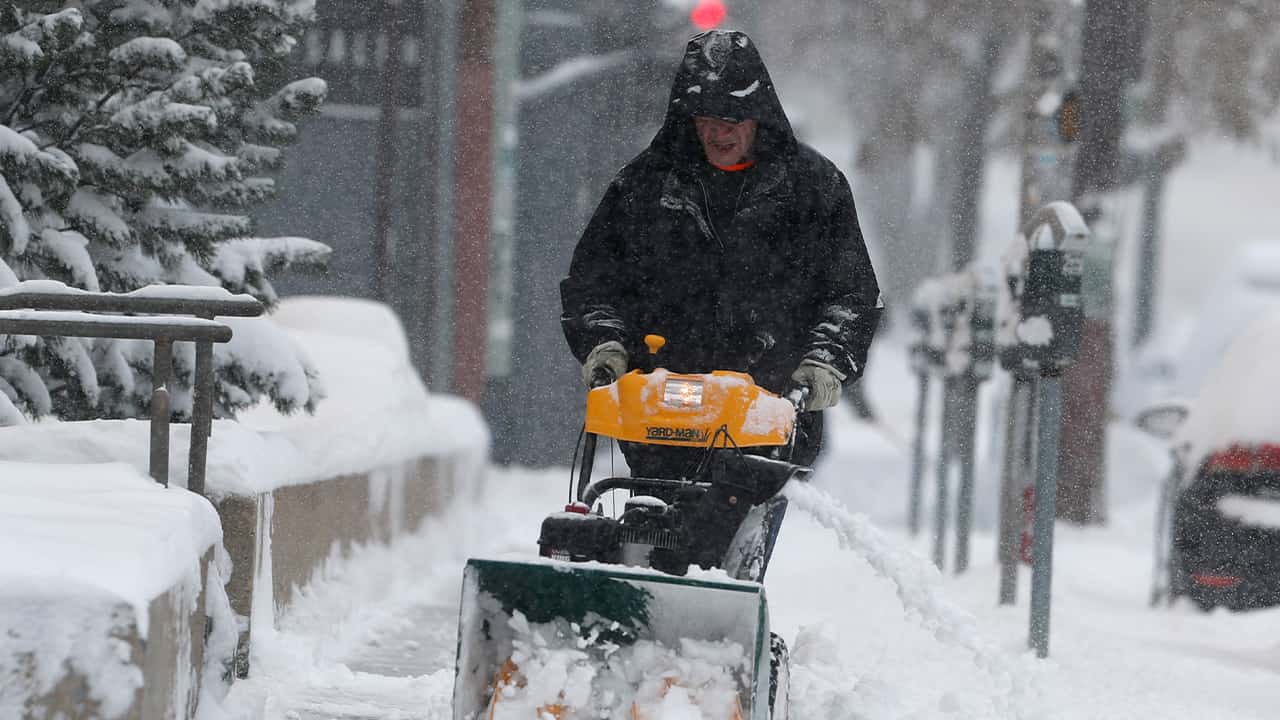 MINNEAPOLIS — A storm packing heavy, blinding snow and fierce winds that wreaked havoc as it whipped through Colorado, Wyoming and Nebraska marched into the upper Midwest on Wednesday as anxious Thanksgiving travelers buckled up and barreled headlong into a busy, if not perilous, holiday week.
The wintry storm that left at least one person dead was expected to push eastward into South Dakota, Iowa, Michigan, Minnesota and Wisconsin, while a “bomb cyclone” weather phenomenon was expected to simultaneously topple trees, knock out power and dump snow as it rolled into California and Oregon.
The one-two punch made for a double whammy of early wintry weather that threatened to scramble plans for millions of people nationwide during one of the busiest travel weeks of the year. Those who left early were confronted with icy and snow-covered roads that made it difficult — if not impossible — to navigate and prompted law enforcement in many places not to even try.
“Stay put,” Kansas Highway Patrol Trooper Tod Hileman urged drivers in a tweet, even as a stretch of Interstate 70 on the state’s western border with Colorado reopened after temporarily closing Tuesday at the height of the storm.
Many travelers headed his warning, filling hotels in the area and the National Weather Service said that Dell Rapids had already received 6 inches of snow while many areas around Sioux Falls had about 4 inches.
Meanwhile, children from South Dakota to Wisconsin got an early start on their holiday weekend, waking up to the news that dozens of school districts canceled classes.

Minnesotans prepared Wednesday for a winter-like blast that’s expected to deliver heavy snow and powerful winds that had officials warning drivers to stay off the roads at least until the winds died down a bit. The University of Minnesota Twin Cities campus canceled classes starting late Tuesday and was not expected to resume operations until Thursday.


“It’s one of those things, you couldn’t make it up if you tried.” — Brent Hewett in Chanhassen, Minnesota
St. Paul Public Schools and the University of St. Thomas also canceled classes as travel conditions deteriorated. National Weather Service meteorologist Brent Hewett in Chanhassen, Minnesota, said the storm could dump 6 inches of snow in central and southern Minnesota, while some areas could see a foot or more snow.
Western and northern Wisconsin could be buried beneath 8 to 12 inches and as much as 20 inches in the far northern area of the state with 12 to 15 inches of lake-effect snow near Lake Superior. To the south, in the Milwaukee area where the temperature reached 50 degrees, the storm brought rain and thunder. raw, blustery day is forecast Wednesday, with winds up to 35 mph. Forecasters said another storm could arrive this weekend, just as people are returning from Thanksgiving.
“It’s one of those things, you couldn’t make it up if you tried,” Hewett said of back-to-back storms falling around the holiday.
On Tuesday, weather-related damage was widespread nationwide. Authorities on both sides of the California-Oregon border reported numerous crashes and closed roads. The National Weather Service urged people to wait to travel for the holiday until the weather improved.
At Denver International Airport, about 10 inches of snow mixed with winds that limited visibility prompted the cancellation of about 30% of the airport’s average daily 1,600 flights. Two men point toward plane arrivals on a flight information board at San Francisco International Airport in San Francisco, Tuesday, Nov. 26, 2019. Northern California and southern Oregon residents are bracing for a ‘bomb cyclone’ that’s expected at one of the busiest travel times of the year. (AP Photo/Jeff Chiu)

About 1,100 People Spent the Night at the Airport

The storm dumped nearly 3 feet of snow in parts of northern Colorado and closed long stretches of highways there and in Wyoming. One person was killed, and two others were injured when a tractor-trailer jackknifed and was hit by two other trucks on Interstate 70 near the Colorado ski town of Vail.
Southwest Airlines canceled about 200 flights. Spokesman Brad Hawkins said it would take “a couple of days” to get stranded passengers on other flights because there are few during the pre-Thanksgiving travel crush. That makes it hard for airlines to rebook passengers.
About 1,100 people spent the night at the airport, including many cadets from the Air Force Academy near Colorado Springs who either missed flights or wanted to get to the airport before road conditions deteriorated, airport spokeswoman Alex Renteria said.
Among them was cadet Sadie Luhman, whose trip to the airport took three hours — twice the normal driving time. She got to the airport at 1 a.m., 10 hours before her scheduled flight to Chicago for Thanksgiving.
“I just wanted to beat the storm. We kind of left in the middle of it so it kind of didn’t work, but we got here,” she told Denver news station KCNC-TV.
Airport workers handed out blankets, diapers, baby formula, toothbrushes and toothpaste to passengers who camped out on floors and in chairs.
Many government offices closed in the Denver area and Cheyenne, Wyoming, along with colleges and schools not already on holiday break. In Nebraska, several school districts canceled classes Wednesday, and the southwestern city of Sidney had received about 8 inches of snow.

Storm Expected to Dump Snow on Airport in Minneapolis

Blizzard and wintry weather warnings extended into the Great Lakes states with the storm bringing high winds and snow to Michigan, Minnesota and Wisconsin and a chance of snow over the weekend for parts of New England, said Alex Lamers, a National Weather Service meteorologist.
“That could be a coast-to-coast storm,” he said. In this still image taken from a Caltrans remote video traffic camera, traffic is stopped along Interstate 80 because of multiple spinouts, Tuesday, Nov. 26, 2019, in Truckee, Calif. Northern California and southern Oregon residents are bracing for a “bomb cyclone” weather phenomenon that’s expected at one of the busiest travel times of the year. The National Weather Service says the storm expected Tuesday into Wednesday could be like nothing experienced in the area for 20 years. (Caltrans via AP)

Multiple roads were closed in southern Oregon due to downed trees and power lines and blizzard-like driving conditions and others were reduced to a single lane, the Oregon Department of Transportation said.
The bomb cyclone — a rapid drop in air pressure — could bring waves of up to 35 feet, wind gusts of up to 75 mph and heavy snow in the mountains.
Snow temporarily shut down part of Interstate 80 north of Lake Tahoe, near the Nevada-California line.

Angela Smith said the Oceanfront Lodge, a hotel she manages in Crescent City, in far Northern California, lost power briefly during rain and strong winds. She said the hotel is ready to withstand heavy downpours.
“It’s blowing pretty good outside but because we’re right on the coast, everything was built to ensure the safety of people,” Smith said.
Forecasters warned of “difficult to impossible travel conditions” across much of northern Arizona later this week as that storm dumps about 2 feet of snow. The approaching storm accelerated the annual winter closure of the highway leading to the North Rim of the Grand Canyon by five days.