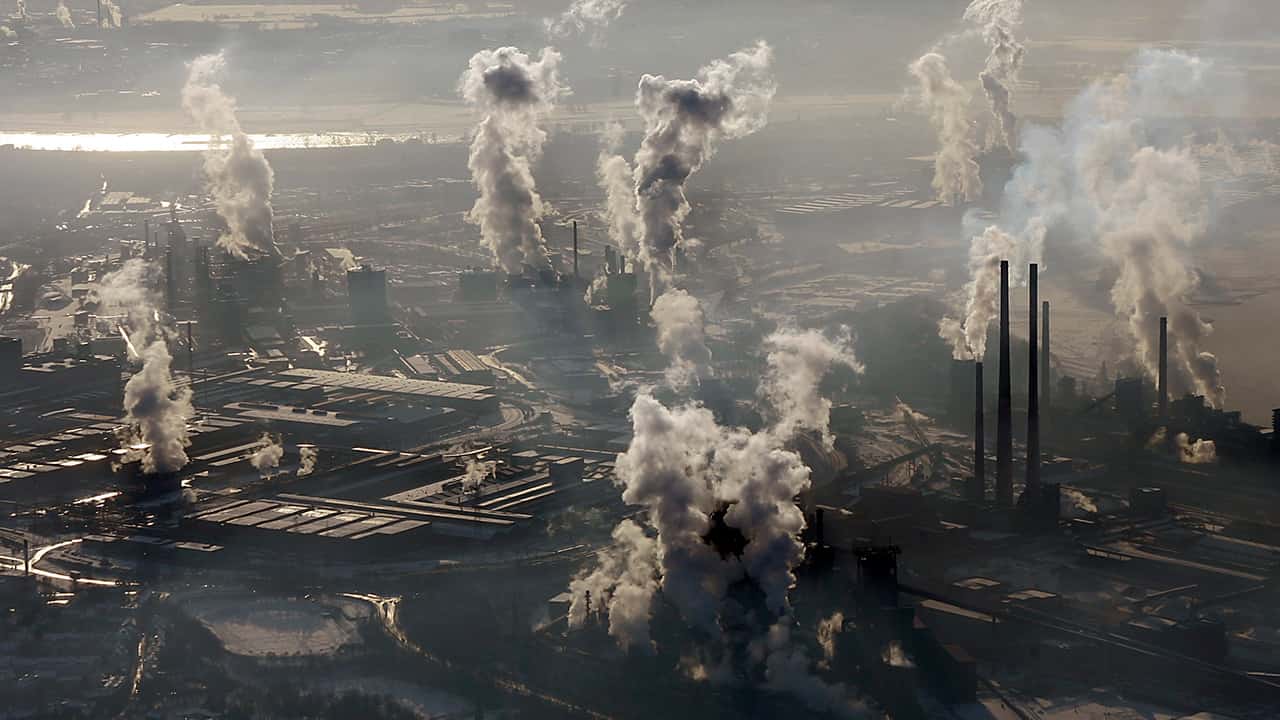 FILE – This Jan. 18, 2019 file photo shows a cyclist amidst morning smog in New Delhi, India. Beth Gardiner’s new book “Choked” documents how air pollution is responsible for seven million premature deaths around the world. Inger Andersen, head of the U.N. Environment Program, says the world needs ‘quick wins to reduce emissions as much as possible in 2020.’ Ahead of a global climate summit in Madrid next week, her agency published a report Tuesday showing the amount of planet-heating gases released into the atmosphere hitting a new high last year. (AP Photo/Manish Swarup, File)

National Pledges Would Leave the World 5.8 Fahrenheit Warmer by 2100

“What we are looking at is really that emissions need to go down by 55 percent by 2030,” said John Christensen, lead author and director of the UNEP-Danish Technology Institute Partnership.
Even the less ambitious goal of capping global warming at 3.6 F would require annual emissions cuts of 2.7% between 2020 and 2030, UNEP said.
That currently seems unlikely.


“What we are looking at is really that emissions need to go down by 55 percent by 2030.” — John Christensen, lead author and director of the UNEP-Danish Technology Institute Partnership
At present, national pledges would leave the world 5.8 Fahrenheit warmer by 2100 than pre-industrial times, with dramatic consequences for life on Earth, the U.N. agency said. Getting the world back on track to 1.5C would require a fivefold increase in measures pledged so far, it calculated.
Last week, UNEP published a separate report, which found that countries are planning to extract more than twice the amount of fossil fuels from the ground than can be burned in 2030 if the 1.5C target is to be met.
This includes countries such as Norway, which touts its green credentials while it continues to drill for oil in the North Sea.
Officials appealed to governments that have already laid out targets for reducing their emissions to see if they can do more, and insisted that industries like power, transport, building and shipping can find opportunities to lower their emissions too.

“As individuals, we have a choice about how we live, what we eat and how we go about our business … and opportunities to live a lower-carbon life,” said Andersen.
Governments’ plans to reduce emissions haven’t been universally welcomed, however.
A $60-billion package of measures agreed by the German government recently has been criticized as a further burden on businesses, while environmentalists say it is too little, too late. Presenting a study Tuesday showing average surface air temperatures in the country have already risen by 1.5C since 1881, German Environment Minister Svenja Schulze insisted that Europe’s industrial powerhouse “is one of the countries that is doing a lot.”
“There are other countries which are quitting climate accords,” she added, without explicitly naming the United States, which under President Donald Trump announced its withdrawal from the Paris Agreement.
Experts agree that the longer countries continue burning fossil fuels, the more warming will be “locked in” as emissions stay in the atmosphere for years or even decades.


Related Story: California Is on Track to Miss Its Climate Targets—by a Century

Conversely, the sooner countries take steps to wean themselves off gas, coal and oil — such as by ending government subsidies for fossil fuels — the more warming will be prevented in the long term.
“There has never been a more important time to listen to the science,” U.N. Secretary-General Antonio Guterres said of the UNEP report. “Failure to heed these warnings and take drastic action to reverse emissions means we will continue to witness deadly and catastrophic heatwaves, storms and pollution.”