The failed stunt, which ranks high on the list of embarrassing auto industry rollouts, came just after CEO Elon Musk bragged about the strength of “Tesla Armor Glass” on the wedge-shaped “Cybertruck.”

On a Los Angeles-area stage with Musk, Tesla design chief Franz von Holzhausen hurled a softball-sized metal ball at the driver’s side window to demonstrate the strength of the glass, which Musk called “Transparent Metal Glass.” It shattered.

“Oh my … God,” Musk said, uttering an expletive. “Maybe that was a little too hard.”

They tried it a second time on the left passenger window, which spider-cracked again.

Musk recovered with a one-liner: “At least it didn’t go through. That’s a plus side.”

The failure overshadowed the truck’s slick unveiling, with some analysts panning its looks. The truck, a stainless-steel covered triangle, resembles the much derided Pontiac Aztek SUV sold by General Motors in the early 2000s. 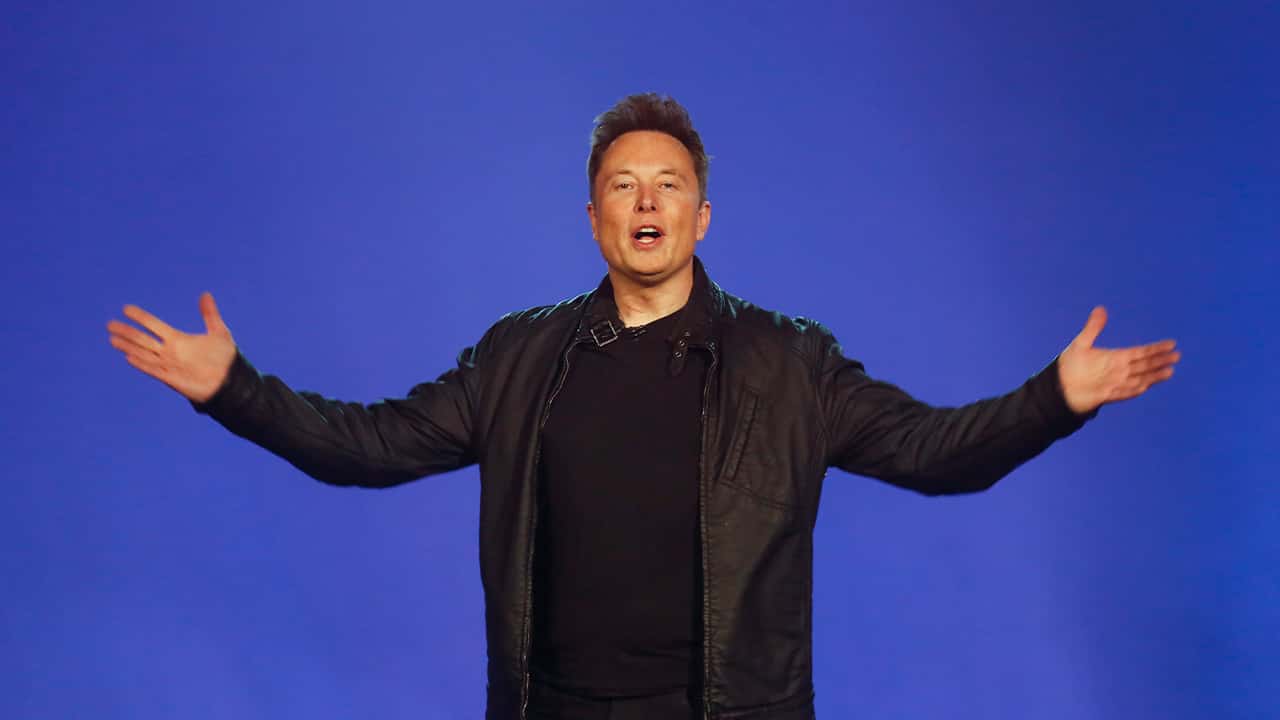 Investors apparently didn’t like the stunts or the truck’s futuristic design, which is aimed at getting a foothold in the most profitable part of the U.S. auto market. Tesla shares fell almost 6% in midday trading Friday.

“Tesla’s Cybertruck reveal will likely disappoint current pickup truck owners, and we see the vehicle remaining a niche and not a mainstream product. While we are pleased to see Tesla enter the most profitable segment of the North American passenger car market, we do not see this vehicle in its current form being a success.” — Cowen Investment Research analyst Jeffrey Osborne

“Tesla’s Cybertruck reveal will likely disappoint current pickup truck owners, and we see the vehicle remaining a niche and not a mainstream product,” Cowen Investment Research analyst Jeffrey Osborne wrote in a note to investors. “While we are pleased to see Tesla enter the most profitable segment of the North American passenger car market, we do not see this vehicle in its current form being a success.”

Over the years, such stunts have been common at highly rehearsed auto industry unveils. But there have been some embarrassing mishaps. At Detroit’s auto show earlier this year, an Infiniti concept electric SUV missed its introduction when it wouldn’t start and the company couldn’t move it onto the stage.

Perhaps the most famous miscue came in Detroit in 2008 when Chrysler showed off the new Ram pickup truck with a cattle drive outside the convention center. But some of the cattle started mating, drawing attention away from the vehicle.

“You can rehearse it 100 times, and the 101st is the time you do it before the public and it fails,” said Bud Liebler, who was head of marketing and communications at Chrysler from 1980 through 2001.

He was in charge when Chrysler became famous for auto-show stunts, including driving a Jeep Grand Cherokee up the entry steps and through the front windows of Detroit’s convention center in the 1990s.

Liebler said he considers the Tesla event a “fiasco,” but said Musk did the only thing he could when the glass broke. He joked about it and continued on with the show. “It’s got to be an embarrassment,” Liebler said.

With the Cybertruck, Tesla was aiming for Detroit’s profit machine, the full-sized pickup.

The truck came onstage with lasers and flames, and a demonstration of its stainless steel skin developed by Musk’s SpaceX rocket company went well. Von Holzhausen swung a sledge hammer at the driver’s side door, and it bounced away harmlessly without any damage.

The electric pickup truck will be in production in 2021, Musk said.

With the truck, Tesla is gunning for buyers with fierce brand loyalty.

Many pickup truck buyers stick with the same brand for life, choosing a truck based on what their mom or dad drove or what they decided was the toughest model, said Erik Gordon, a professor at the University of Michigan Ross School of Business. 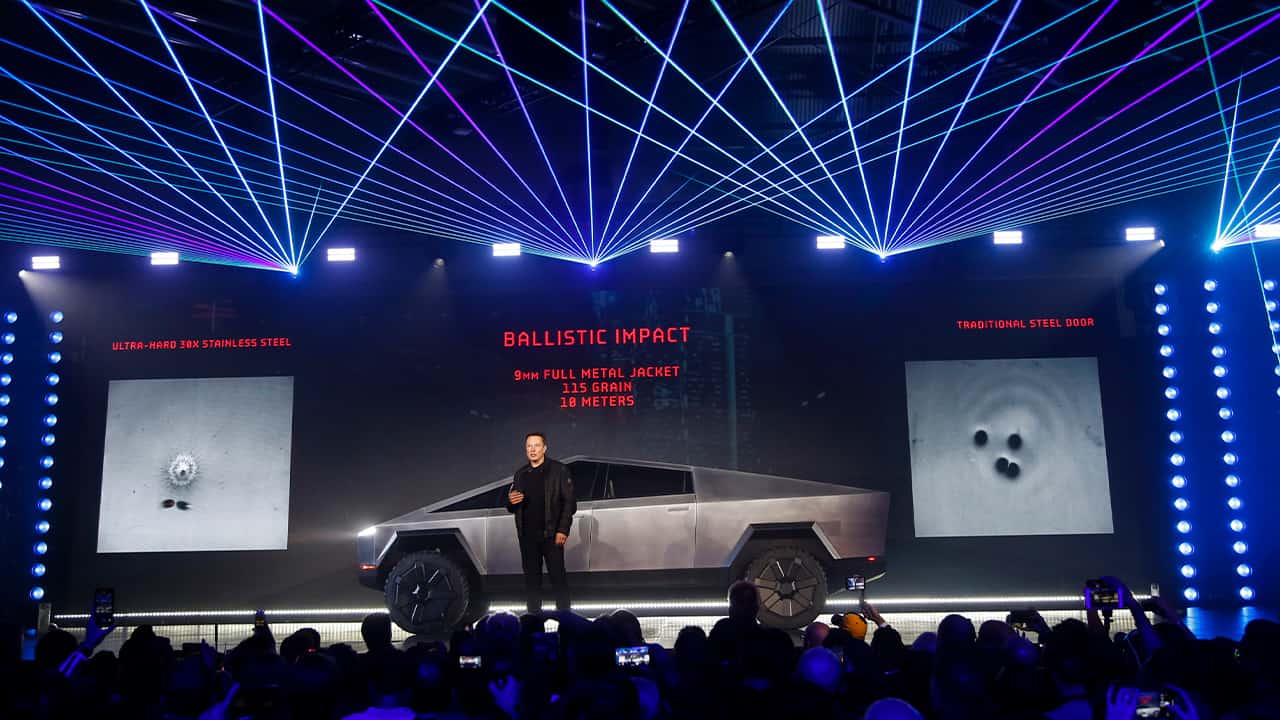 The Truck Will Help Musk Enter a New Market

“They’re very much creatures of habit,” Gordon said. Getting a loyal Ford F-150 buyer to consider switching to another brand such as a Chevy Silverado, “it’s like asking him to leave his family,” he said.

“The needs-based truck buyer, the haulers, the towers at the worksites of the world, that’s going to be a much tougher sell.” — Akshay Anand, executive analyst at Kelley Blue Book

Tesla’s pickup is more likely to appeal to weekend warriors who want an electric vehicle that can handle some outdoor adventure. And it could end up cutting into Tesla’s electric vehicle sedan sales instead of winning over traditional pickup truck drivers.

“The needs-based truck buyer, the haulers, the towers at the worksites of the world, that’s going to be a much tougher sell,” said Akshay Anand, executive analyst at Kelley Blue Book.

The truck will help Musk enter a new market, but it’s not likely to make a bunch of money for the company. Instead, Tesla will rely on its mainstream Model 3 sedan and the upcoming Model Y small SUV due to go on sale in early 2021.

Musk stands to face competition when his truck hits the market. Ford, which has long dominated the pickup truck landscape, plans to launch an all-electric F-150 pickup. General Motors CEO Mary Barra said its battery-electric pickup will come out by the fall of 2021.

Rivian, a startup based near Detroit, plans to begin production in the second half of 2020 on an electric pickup that starts at $69,000 and has a battery range of 400-plus miles.

Tesla has struggled to meet delivery targets for its sedans, and some fear the new vehicle will shift the company’s attention away from the goal of more consistently meeting its targets.