ATLANTA — Coming out of their debate in a key center of black America, the leading Democratic presidential contenders aimed for the party’s crucial black and minority vote, with the scramble putting internal party tensions on display.

From black protesters disrupting Elizabeth Warren to the lone black woman in the race chiding white, upstart Mayor Pete Buttigieg, the dynamics in Atlanta highlighted the push for crucial black and other minority support with less than three months before primary voting begins. They further underscored some candidates’ vulnerabilities in trying to assemble the coalition necessary to win the nomination — and defeat President Donald Trump in the general election.

Warren electrified a raucous and racially diverse crowd in the Clark-Atlanta University gymnasium as she tries to expand her support beyond the white liberal base that boosted her in the primary polls this summer. But the Massachusetts senator had to endure protests of a black school-choice group that threatened to overshadow her message aimed squarely at black women — Democrats’ most loyal faction.

Buttigieg, the South Bend, Indiana, mayor who leads caucus polls in overwhelmingly white Iowa, spent the day defending remarks relating his experience as a gay man to the systemic racism facing African Americans. Kamala Harris, the California senator and only black woman in the race, blasted his approach as “naive.”

Like Buttigieg, Bernie Sanders invoked his biography, as the child of an immigrant family with casualties in the Holocaust, to connect with African Americans’ struggle against oppression and white supremacy. Harris, still lagging the front-runners, has not criticized the way Sanders talks about race, but the Vermont senator still must prove he can get more black votes than he did in losing the 2016 nominating fight. 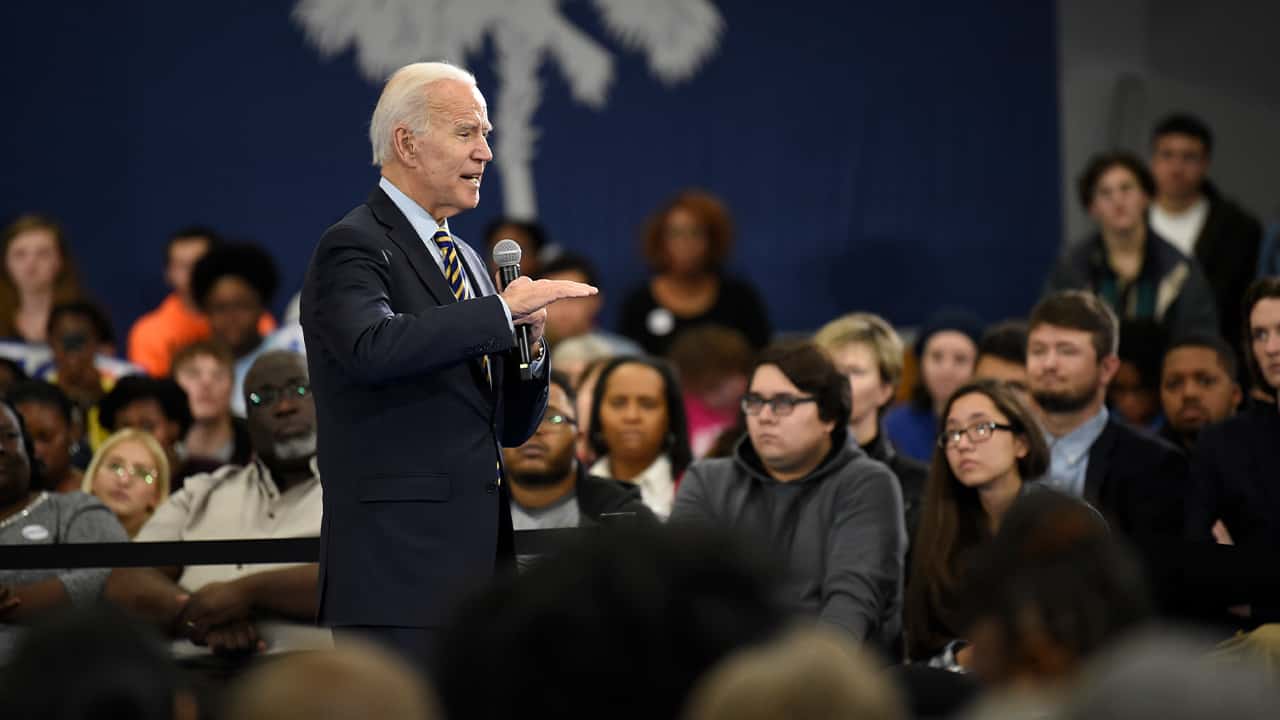 Biden Has a Considerable Lead Among Black Voters

All those contenders are trying to catch Vice President Joe Biden, whose considerable lead among black voters leaves him atop most national polls. Biden spent Thursday meeting with black Southern mayors, led by Atlanta’s Keisha Lance Bottoms, one of his top campaign surrogates. But it wasn’t all smooth for Biden, as immigration activists interrupted him in South Carolina demanding he pledge to halt deportations on his first day in office. Biden refused.

“Black history is American history. And American history teaches us that racism has for generations shaped every crucial aspect of our economic and political system.” — Elizabeth Warren

Before an energetic crowd at Clark-Atlanta, the senator called for a “full-blown national conversation about reparations” for slavery, and she praised black women for helping build the country and advancing social and economic justice. She bemoaned structural impediments beyond slavery, naming Jim Crow segregation, modern-day mass incarceration and red-lining practices that make it harder for minorities to get mortgage loans.

“Black history is American history,” Warren said. “And American history teaches us that racism has for generations shaped every crucial aspect of our economic and political system.”

“I am not afraid,” she said to roars. “And you cannot be afraid, either.”

Yet for a time, it looked as if Warren might not be able to deliver the rare formal speech that aides had built up as a seminal moment in her campaign. Moments into her address, dozens of black protesters from a school-choice group interrupted. They stood down only after Massachusetts Rep. Ayanna Pressley took the microphone from Warren.

“The senator is here to talk about fighters like you,” said Pressley, who is black. In drowning out Warren, she said, the group was keeping the senator from telling the story of black women already marginalized.

Buttigieg, meanwhile, found no such defender as he enjoys a newfound lead in Iowa, the first-caucus state, but shows negligible black support in more diverse primary states that follow. So, he was left to contend with Harris alone.

Their flap spun off the mayor saying Wednesday during a debate segment on race that he has “felt like a stranger” in his own country because his civil rights as a gay man were left to the whims of politicians.

During a post-debate event, Harris lambasted Buttigieg for comparing the struggles of black and LGBTQ communities. A Democrat who wants a winning coalition, she said, “should not be … saying one group’s pain is equal than or greater” than another’s.

Buttigieg pushed back, telling reporters, “There’s no equating those two experiences,” and maintaining that he hadn’t done so.

Sanders understands as well as any candidate that Democratic presidential politics demands more than just enthusiastic white support. The Vermont senator battled Hillary Clinton to a surprise draw in Iowa in 2016 and trounced her in New Hampshire, another mostly white Democratic electorate. Yet with overwhelming black support, Clinton then dominated Sanders in South Carolina and across the Deep South, building an early delegate lead she never relinquished. 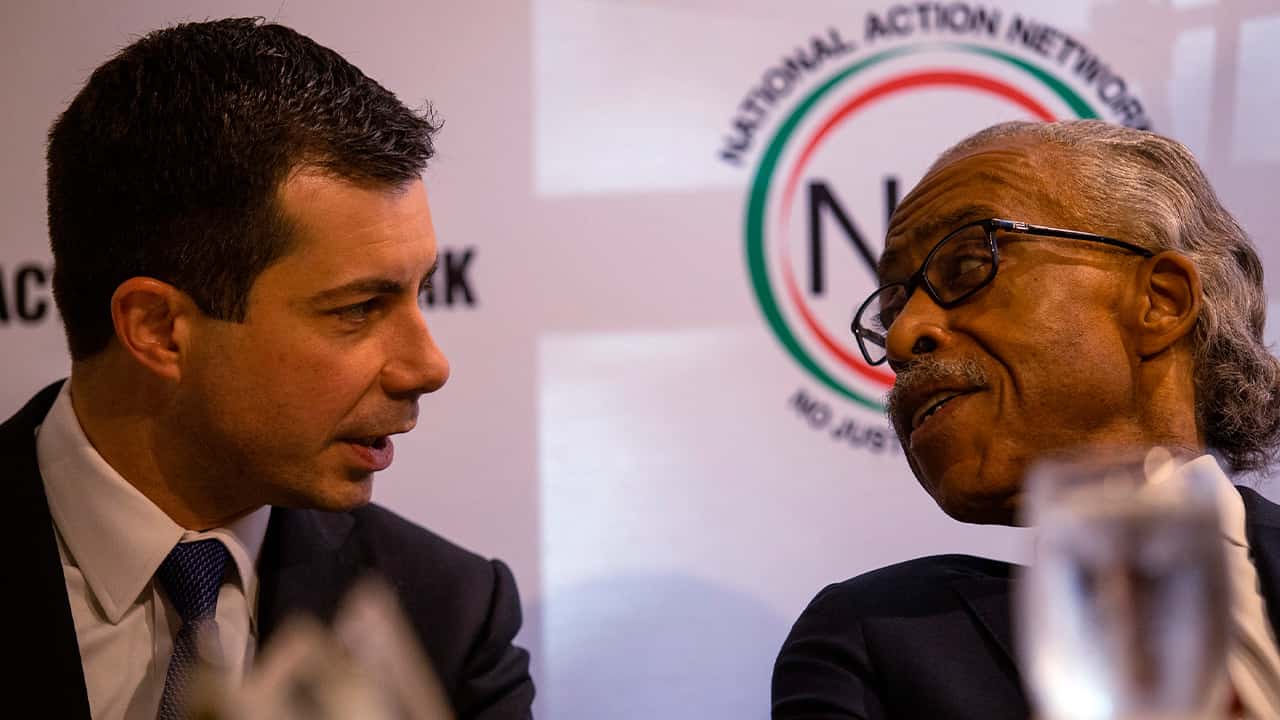 This time, he’s intent on building black support earlier in the campaign, and on Thursday, he noticeably leaned more on biographical details than he did for much of his 2016 campaign, even as he ticked through his usual list of progressive policy remedies.

Now 78, he told the crowd — gathered around a statue of Morehouse alumnus Martin Luther King Jr. — of his 1960s activism, describing himself and his fellow white students as “not quite so brave” as black citizens in the more dangerous Jim Crow South. But, Sanders said, “I was arrested and went to jail fighting housing segregation in Chicago.”

And he wanted them to know his family history.

“Some of you know, I’m Jewish,” Sanders said. “My father came to this country from Poland. He came fleeing anti-Semitism. A lot of people in my father’s family did not make it out of Poland.

“They were murdered by the father of white supremacy, Adolf Hitler,” Sanders continued. “So, I learned at a very young age what racism and white supremacy and Aryanism and all that crap is about.”