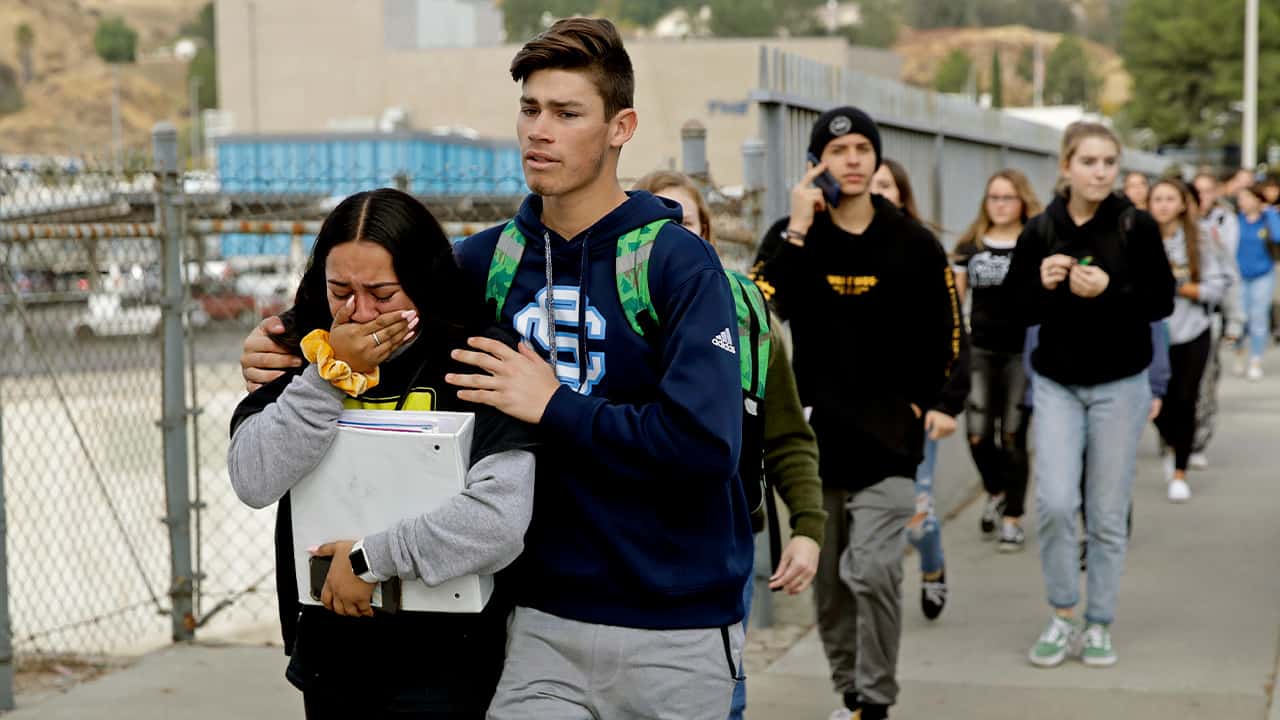 LOS ANGELES — The teenager who shot five classmates, killing two, at a Southern California high school used an unregistered “ghost gun,” Los Angeles County Sheriff Alex Villanueva said Thursday.
Villanueva told media outlets Thursday that 16-year-old Nathaniel Tennosuke Berhow’s .45 caliber semi-automatic pistol was assembled from gun parts and did not have a serial number.
Berhow pulled the gun from his backpack on Nov. 14— his birthday — in an open-air quad at Saugus High School in the Los Angeles suburb of Santa Clarita and in 16 seconds shot five students at random. At one point, the gun jammed but he quickly cleared it and continued shooting.

Berhow counted his rounds, Villanueva has said, saving the last bullet for himself.
Sheriff’s Lt. Brandon Dean of the homicide bureau said in a statement that authorities do not know who assembled the pistol or bought its components. FILE – This Nov. 14, 2019 file photo shows a California Highway Patrol officer escorting students out of Saugus High School after a shooting on the campus in Santa Clarita, Calif. Authorities say the teenager who shot five classmates, killing two, at a Southern California high school used an unregistered “ghost gun.” Los Angeles County Sheriff Alex Villanueva Villanueva told media outlets Thursday, Nov. 21, 2019 that Nathaniel Tennosuke Berhow’s semi-automatic handgun had been assembled and did not have a serial number. Authorities are still working to determine how Berhow got the handgun. Berhow died from a self-inflicted gunshot wound after the shooting. (AP Photo/Marcio Jose Sanchez, File)

The sheriff said Berhow’s motive remains a mystery, even after investigators searched his home and interviewed 45 people. Berhow’s mother — who packed him corndogs, grapes and homemade cookies for lunch that morning — had no idea what was coming, Villanueva said.
Authorities said Berhow had shown no signs of violence and didn’t appear to be linked to any ideology or terrorist group.
The sheriff’s department is working with federal authorities to unlock Berhow’s cellphone, Villanueva said.

Berhow’s father was an avid hunter who died two years ago. He had six registered guns in the family’s home but they were seized in 2016.
Officials found several unregistered firearms in the home after the shooting and are working to determine where those and the weapon used at the high school came from.
Authorities have identified the dead as 15-year-old Gracie Anne Muehlberger and 14-year-old Dominic Blackwell.
Related Topics:Californiaghost gunLos AngelesNathaniel Tennosuke BerhowpistolSanta Clarita
Up Next

7 Arrested at Rally Against Ann Coulter Speech in Berkeley