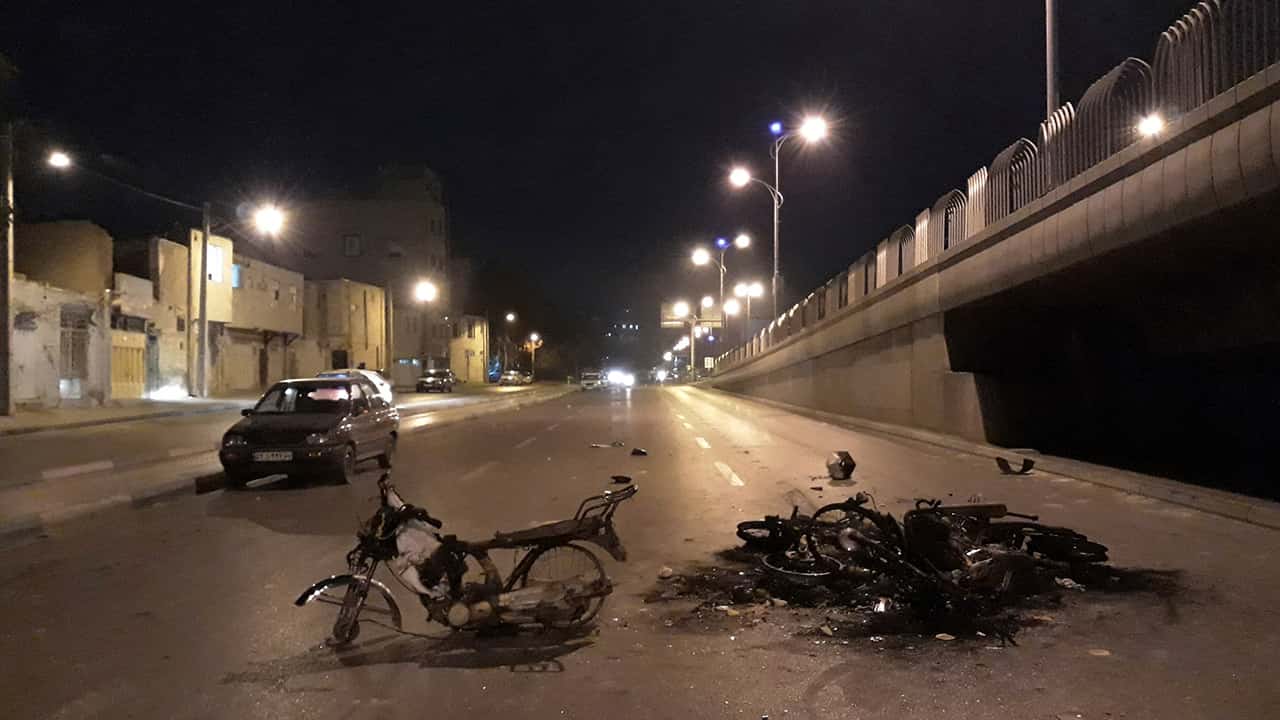 DUBAI, United Arab Emirates — Iran’s supreme leader on Sunday cautiously backed the government’s decision to raise gasoline prices by 50% after days of widespread protests, calling those who attacked public property during demonstrations “thugs” and signaling that a potential crackdown loomed.
The government shut down internet access across the nation of 80 million people to staunch demonstrations that took place in a reported 100 cities and towns. That made it increasingly difficult to gauge whether unrest continued. Images published by state and semiofficial media showed the scale of the damage in images of burned gas stations and banks, torched vehicles and roadways littered with debris.
Since the price hike, demonstrators have abandoned cars along major highways and joined mass protests in the capital, Tehran, and elsewhere. Some protests turned violent, with demonstrators setting fires as gunfire rang out.
It remains to be seen how many people were arrested, injured or killed. Videos from the protests have shown people gravely wounded.
Iranian authorities on Sunday raised the official death toll in the violence to at least three. Attackers targeting a police station in the western city of Kermanshah on Saturday killed an officer, the state-run IRNA news agency reported Sunday. A lawmaker said another person was killed in a suburb of Tehran. Earlier, one man was reported killed Friday in Sirjan, a city some 800 kilometers (500 miles) southeast of Tehran.
In an address aired Sunday by state television, Ayatollah Ali Khamenei said “some lost their lives and some places were destroyed,” without elaborating. He called the protesters “thugs” who had been pushed into violence by counterrevolutionaries and foreign enemies of Iran.

A Crackdown Could Be Looming

Khamenei specifically named those aligned with the family of Iran’s late shah, ousted 40 years ago, and an exile group called the Mujahedeen-e-Khalq. The MEK calls for the overthrow of Iran’s government and enjoys the support of President Donald Trump’s personal lawyer, Rudy Giuliani. This photo released by the Iranian Students’ News Agency, ISNA, shows a gas station that was burned during protests that followed authorities’ decision to raise gasoline prices, in Tehran, Iran, Sunday, Nov. 17, 2019. Ayatollah Ali Khamenei, Iran’s supreme leader on Sunday backed the government’s decision to raise gasoline prices and called angry protesters who have been setting fire to public property over the hike “thugs,” signaling a potential crackdown on the demonstrations. (Abdolvahed Mirzazadeh/ISNA via AP)

Cheap Gasoline Is Practically Considered a Birthright in Iran

The semiofficial Fars news agency, close to the Guard, put the total number of protesters at over 87,000, saying demonstrators ransacked some 100 banks and stores in the country. Authorities arrested some 1,000 people, Fars reported, citing unnamed security officials for the information.
The protests have put renewed pressure on Iran’s government as it struggles to overcome the U.S. sanctions that have strangled the economy since Trump unilaterally withdrew America from the nuclear deal over a year ago.
While representing a political risk for Rouhani ahead of February parliamentary elections, the demonstrations also show widespread anger among the Iranian people, who have seen their savings evaporate amid scarce jobs and the collapse of the national currency, the rial.
Cheap gasoline is practically considered a birthright in Iran, home to the world’s fourth-largest crude oil reserves despite decades of economic woes since its 1979 Islamic Revolution. Gasoline in the country remains among the cheapest in the world, with the new prices jumping 50% to a minimum of 15,000 rials per liter. That’s 13 cents a liter, or about 50 cents a gallon. A gallon of regular gasoline in the U.S. costs $2.60 by comparison.
Iranian internet access saw disruptions and outages Friday night into Saturday, according to the group NetBlocks, which monitors worldwide internet access. By Saturday night, connectivity had fallen to just 7% of ordinary levels. It was mostly unchanged on Sunday.

The Largest Internet Shutdown Ever Observed in Iran

NetBlocks called it the most severe shutdown the group had tracked in any country “in terms of its technical complexity and breadth.” On Twitter, NetBlocks said the disruption constituted “a severe violation” of Iranians’ “basic rights and liberties.”