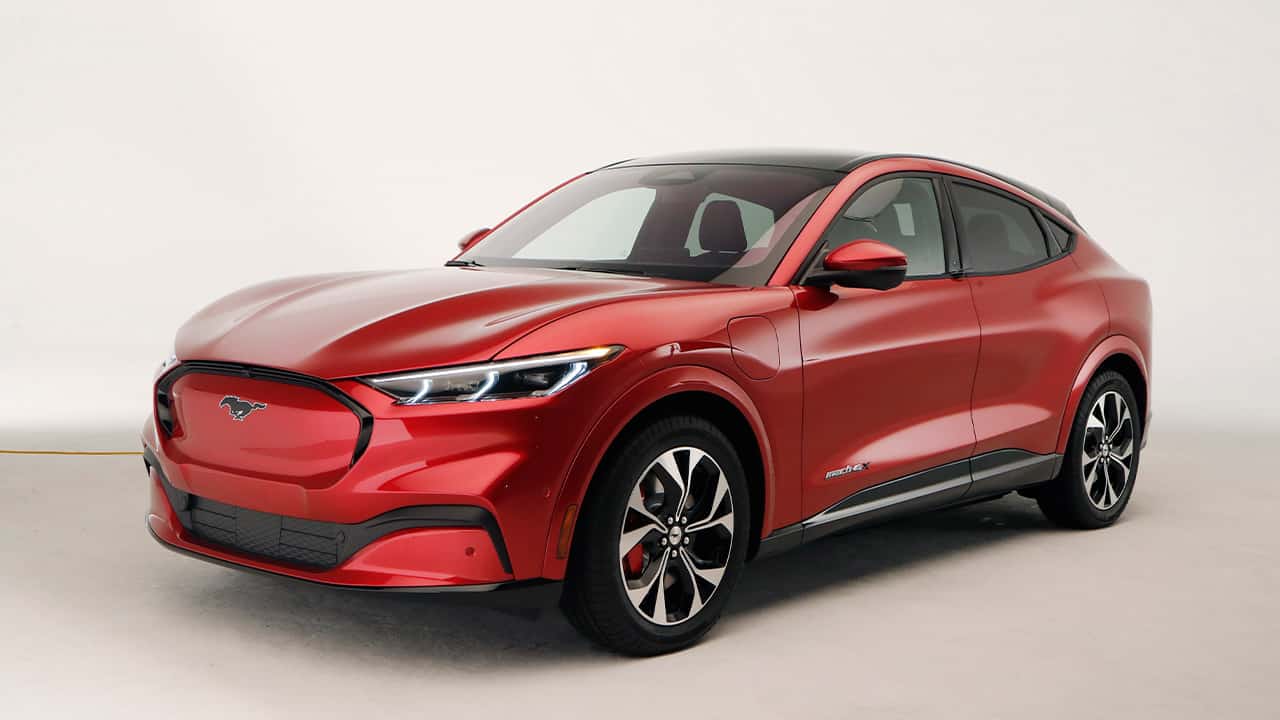 DEARBORN, Mich. — Ford is unveiling its first all-electric SUV, marking the start of an avalanche of battery-powered vehicles coming from mainstream and luxury automakers during the next two years that industry analysts say will boost electric vehicle sales.
The “Mustang Mach E,” which will go 230 miles to more 300 miles per charge depending on how it’s equipped, was unveiled Sunday night ahead of the Los Angeles Auto Show press days.
There are 18 now for sale in the U.S., and IHS Markit expects that to grow to 80 in 2022, including pickup trucks and SUVs that are in the heart of the American market. Yet last year, pure electric vehicles made up only 1.5% of new vehicle sales worldwide, and the consulting firm LMC Automotive predicts that will rise to 2.2% this year. In the U.S., electric vehicles were only 1.2% of sales in 2018, and it’s expected to be about the same this year.
But automakers see opportunity for growth, and with electric vehicles getting 250 miles or more on a single charge, worries about running out of juice on a daily commute are gone. Because of the added models and increased range, LMC predicts that they will make up 17% of global sales and 7% of U.S. sales in 2030.
First-generation electric vehicles, which mainly were retrofitted versions of existing models designed to meet government fuel economy standards, didn’t sell well largely because they couldn’t travel more than 100 miles between charges. But now, many can go beyond the distance people drive in one day with plenty of cushion.

Ford and General Motors Have Announced Plans for All-Electric Pickups

“Seeing 250 miles as a real thing has been kind of a game changer in the electric car market,” said Jake Fisher, director of auto testing for Consumer Reports. “There haven’t been a lot of choices for a vehicle that really could take the place of a mainstream vehicle. It’s a whole different animal now.”


“Seeing 250 miles as a real thing has been kind of a game changer in the electric car market. There haven’t been a lot of choices for a vehicle that really could take the place of a mainstream vehicle. It’s a whole different animal now.” — Jake Fisher, director of auto testing for Consumer Reports
Stephanie Brinley, principal auto analyst for IHS Markit, said electric vehicle choices may expand before consumer demand does, but eventually people will buy them.
“The increased number of models with an electric drivetrain will contribute to an increase in sales in the U.S.,” she said. “However, there is likely to be a period where the number of options will increase faster than demand and sales for each will be relatively low,” she said.
While many electrics coming in the next few years are from luxury brands, mainstream brands like Ford, Chevrolet and Toyota also have them on the production schedule. Brands that have announced new models that will go on sale in the next few years include Mercedes-Benz, Audi, Cadillac, Byton, Rivian, Bollinger, Kia, Faraday Future, Volkswagen, Mazda, Tesla, Aston Martin, Polestar, and Volvo, according to the Edmunds.com auto pricing site. Edmunds provides content to The Associated Press.
Ford and General Motors have announced plans for all-electric pickups that will compete against gas and diesel trucks that are the top sellers in the U.S.
For Ford, executives realized in 2017 that they had to offer something more exciting for the first of a new generation of electric vehicles. The company last year it promised six battery electric vehicles by 2022. It also has partnerships with VW and startup Rivian to build more.
To sell them, Ford decided to go to the company’s strengths: Pickup trucks, commercial vans and the high-performance Mustang. This Wednesday, Oct. 30, 2019 photo, shows the interior of the new Ford Mustang Mach-E SUV in Warren, Mich. Ford is hoping to score big with the electric SUV for daily drivers that sort of looks like a Mustang performance car. The new SUV, to be unveiled just ahead of the Los Angeles Auto Show press days, should have range of up to 300 miles. It’s one of dozens of electric vehicles coming globally by 2022. Automakers are eyeing what they think will be a growing market in the years to come. (AP Photo/Carlos Osorio)

U.S. Orders Are Being Taken Now

“There are going to be plenty of BEV (battery electric) SUVs on the market. Some will have big batteries and double motors and be pretty fast. Some will look really good,” said Jason Castriota, the company’s brand director for electric vehicles. “No one can combine all those elements and create something that will cut right through the clutter,” he said. “Mustang is power.”
The five-passenger Mach E sort of resembles a Mustang, and Ford says it comes close to matching the car’s performance. Engineers say the base model will have a range of about 230 miles per charge, with a long-range option of more than 300 miles. The base version is expected to go from zero to 60 mph in a little over six seconds, Ford said, while the performance GT version will do it in about 3.5 seconds.
The base version is rear-wheel-drive, with all-wheel-drive options. It has the Mustang pony badge on the front and rear, a long hood and a fastback look at the rear. Yet designers preserved rear-seat headroom with a blacked-out glass roof. The Mustang team set up the Mach E’s chassis tuning, which determines its handling. Designers also copied the Mustang’s triple tail lights.
U.S. orders are being taken now, and the SUV will reach showrooms next fall. The base model will start just under $44,000, with the GT starting around $65,000. Ford buyers are still eligible for a $7,500 federal tax credit, which is being phased out at Tesla and General Motors.
Ford has deal with Electrify America and others for a national network that includes over 12,000 charging stations and 35,000 plugs, so EV owners can go on longer trips.
The company also will have 2,100 of its U.S. dealerships certified to service electric vehicles.

How Eight Presidential Wannabes Pitched Themselves to California Dems