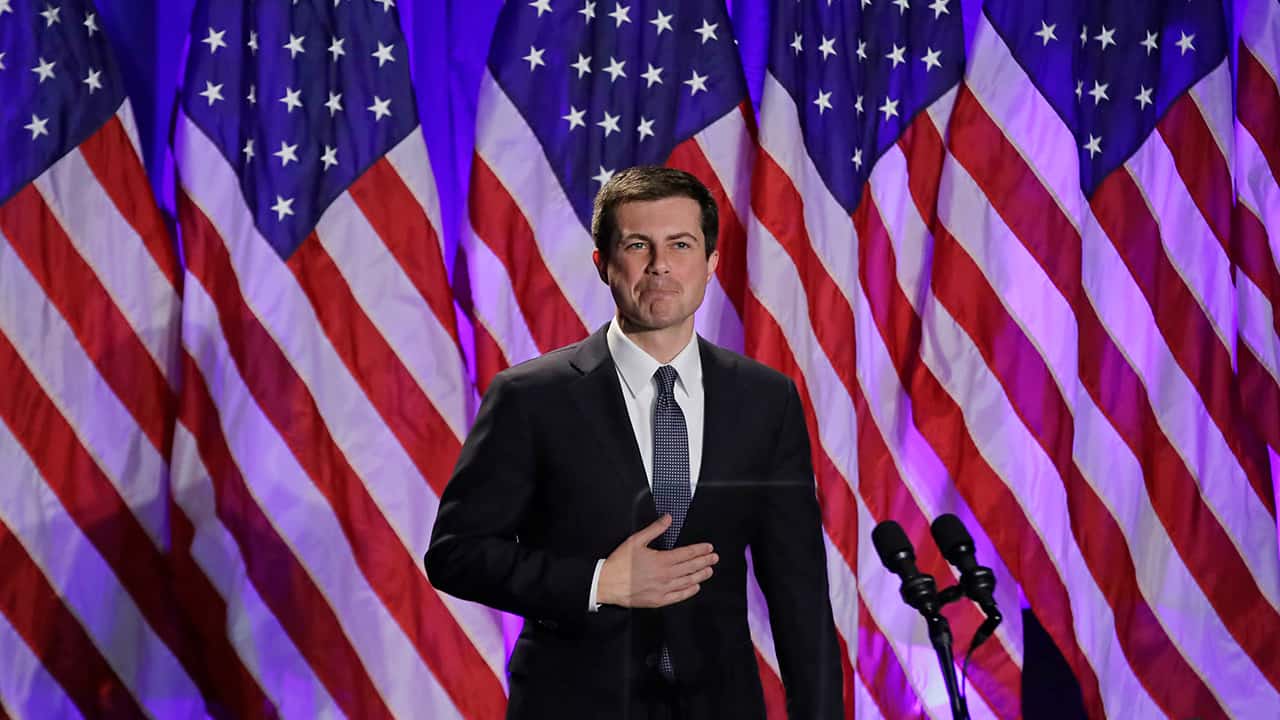 MASON CITY, Iowa — Pete Buttigieg strides past an oversized photograph of himself dressed in fatigues, the Afghan horizon behind him, as he enters a Des Moines arena for an Iowa Democratic Party gala.
In his first Iowa television ad, he holds a rifle and points it toward the rubble at his feet, introducing himself, “As a veteran … .”
Like candidates from the time of George Washington, the South Bend, Indiana, mayor is leaning hard on his seven-month deployment as an intelligence officer in Afghanistan as a powerful credential. As he does, he walks a narrow path between giving his wartime service its due and overstating it.
He is careful not to call himself a combat veteran even as he notes the danger he faced. One of his former competitors for the Democratic nomination, Rep. Seth Moulton of Massachusetts, has drawn a sharp contrast between his four combat tours in Iraq and Buttigieg’s service. And a former commanding officer, who said he thinks Buttigieg would be within his rights to say he is a combat veteran, nonetheless questions the use of a rifle in his ads.
As support for his campaign grows, Buttigieg can expect more intense scrutiny of his military record in a political climate where military service is far from sacred, as past attacks on the records of Republican John McCain and Democrat John Kerry show.
Buttigieg addressed the subject with reporters during a recent bus tour in northern Iowa. “It kind of felt like combat when the rocket alarm went off,” he said. “But I don’t feel prepared to use that term for myself.”

He Volunteered for Service and Was Quickly Recognized for His Intellect

Buttigieg and Rep. Tulsi Gabbard are the only Democratic candidates with military experience. He would not only be the first Democratic president to have served in the armed forces since Jimmy Carter, he would be the first veteran of a post-9/11 war. He Weaves His Experience Into Campaign Events With Voters

But Buttigieg never fired his weapon nor was he fired on, criteria for the Combat Action Badge, which is Karweik’s definition of a combat veteran and the one Buttigieg observes.
That doesn’t mean Buttigieg holds back while campaigning in emphasizing the more dangerous aspects of his time in the war zone to distinguish himself subtly from his top-tier Democratic rivals and directly with President Donald Trump.
“I don’t have to throw myself a military parade to see what a convoy looks like, because I was driving in one around Afghanistan right about the time this president was taping season seven of ‘Celebrity Apprentice,’” Buttigieg told Iowa Democrats at the state party’s marquee fundraiser in Des Moines this month.
Buttigieg also often notes he has “seen worse incoming than a misspelled tweet.” There were sporadic, often inaccurate, but sometimes deadly rocket attacks when he was stationed at Bagram Air Force Base before being transferred to Kabul.
He weaves his experience into campaign events with voters, especially when it reinforces his proposal to ban assault weapons.
“This is definitely not the sense of peace and security I thought I was protecting when I was carrying one of these damn things around a war zone,” Buttigieg told voters in Charles City, Iowa, this month.
And while Buttigieg says he relishes the chance to compare records with the Republican president, who received five draft deferments during the Vietnam War, there are warning signs for Buttigieg of overplaying his service.

‘It Boils Down to a Bit of Semantics’

Moulton, who left the race in September, pointedly noted his four deployments to Iraq as a Marine combat officer was a better test of leadership than Buttigieg’s.
“It’s good that Mayor Pete served, but there’s a world of difference between driving a Chevy Suburban in Kabul, where plenty of foreigners walk around without a problem, and closing on the enemy in combat,” Moulton told the Washington Examiner in September. Moulton declined to be interviewed for this report.

Buttigieg dismissed whether the picture embellished his real mission. It was taken when he and a handful of others were on a hike within the Green Zone, he said.
“If you’re watching closely, you’ll notice I’m not wearing body armor,” he told The Associated Press. “It was manageable risk, but you still wanted to have your weapon.”
Distinctions such as these have begun stirring Republican critics on social media to cast doubt on Buttigieg’s credibility.
They are reminiscent of Trump’s 2015 criticism of McCain’s capture as a Navy pilot during the Vietnam War, which showed the president’s willingness to challenge even valorous service.
In the fall of 2004, Swift Boat Veterans for Truth, a political group that was by law allowed to raise unlimited sums from undisclosed donors, challenged Kerry’s version of events from 1969 that had earned the Navy veteran a Silver Star. Kerry’s campaign opted not to respond to the ads, as to not legitimize them, a decision the Massachusetts senator later suggested was a key to his loss to Republican President George W. Bush.
Candidates must abandon the idea that their service can inoculate them from attacks and should prepare early a strategy to confront them aggressively, said David Wade, Kerry’s campaign spokesman and longtime adviser.
“Bottom line, if it’s a character issue, you have to match dollar-for-dollar on advertising,” Wade said.